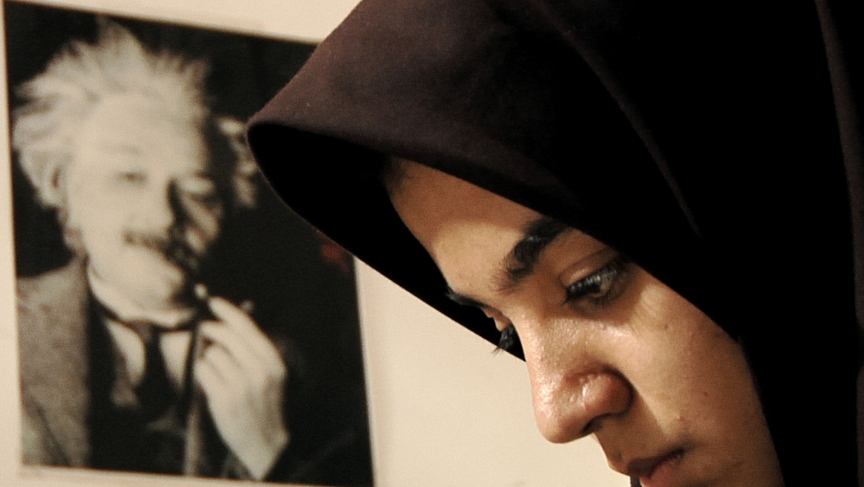 Sepideh Hooshyar at her home in Iran with a poster of Albert Einstein in the background.

It all happened by accident. Berit Madsen, a documentary film maker from Denmark, heard about an astronomy festival taking place in a remote place in central Iran.

She was intrigued, and decided to pack her bags and see for herself what it was about.

It was there that she met Sepideh Hooshyar, a 14-year-old Iranian girl.

"I was immediately attracted to Sepideh," says Madsen, whose husband is also Iranian. "There was her shiny eyes and she was burning with passion," she says.

Sepideh had a dream: to become an astronaut. It's something that is not very easy if you are a woman and living in a conservative country such as Iran.

"I had to get in contact with her because she was so obsessed, lugging around her big telescope that's almost her own size," Madsen says.

Madsen then began documenting Sepideh's life as she struggled to follow her dream.

The result is a documentary film called "Sepideh: Reaching for the Stars" which is currently showing at the Sundance Film Festival.

Sepideh is constantly challenged by her family about going out to watch the stars in the middle of night along with a group of people she doesn't know.

She lost her father when she was a child and her mother finds it difficult to support her hobby.

And her uncle doesn't approve of her night-time outings. In one scene he even threatens to kill her.

Director Madsen remembers that moment: "Suddenly the conversation took that turn and he started to be that aggressive, I had to leave the room for a while because it wasn't that pleasant," she says.

But opposition from her family doesn't stop Sepideh. She continues to challenge her mother and uncle and manages to go out to watch the stars.

Madsen says while this is a story about an Iranian girl from a small town fighting obstacles to reach her goal, the theme of the movie is universal.

"I think it's a story that we all can relate to.  If you dream big enough and you're willing to pay the price, you might even get closer or further than you imagined," she says.