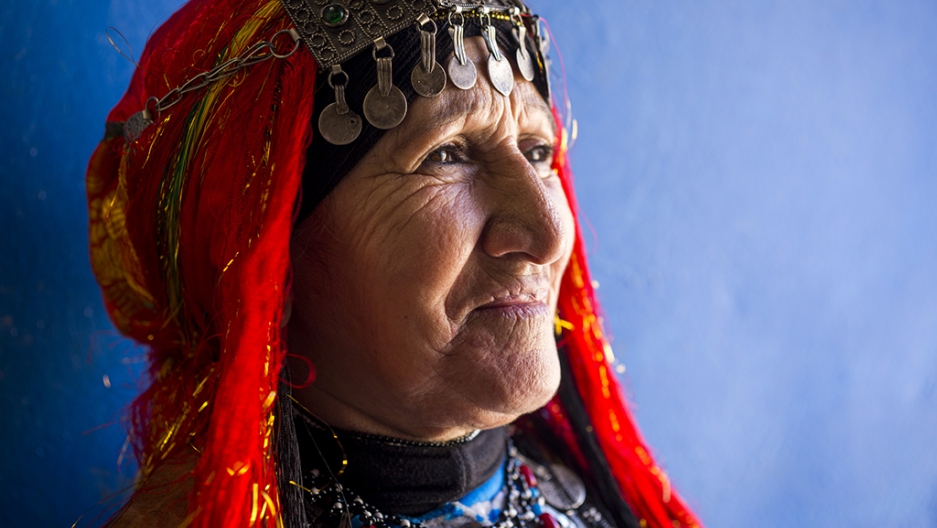 Fadma Hassi, 74, poses in a traditional Berber headdress, called a qtib. "Being Amazigh isn’t just about tradition, it is a way of life."
Credit: JP Keenan
Share

RABAT, Morocco — Berbers young and old clenched balloons and flags last week as they gathered outside Parliament calling for a national observance of their new year.

The Berbers, an ethnic group indigenous to North Africa also referred to as the Amazigh, predate the Arabs of Morocco, but historically they have been left out of the political process. Jan. 13 marked the first day of year 2964 on the Berber calendar.

“For those who fight for Amazigh rights, [national observance of the new year] would mean a lot. It would mean our Amazigh identity would be more accepted by our country," said Salma Idraïs, 20, a Berber journalism student studying in Rabat.

Since the Arab Spring, Berbers throughout North Africa have been advocating for their rights.

“You can equate their struggle to the Native Americans,” said anthropologist Susan Schafer Davis, who has spent more than 30 years living and working in Morocco. “They’ve been pushed further and further into isolated spaces.”

Although the new 2011 Moroccan constitution included the Berber dialect Tamazight as an official language of the country and the national education minister in 2012 promised to double the number of students taking Tamazight classes, many promises of Berber integration have yet to materialize, say Amazigh rights activist groups.

Ahmed Boukous, director of the Royal Institute of Amazigh Culture, told the AFP that the teaching of Amazigh in public schools “has paradoxically regressed.”

And the impact of such reforms have rarely been felt in the rural communities of Morocco, according to Fadma Hafid, 90, who said she has lived largely the same life in Kourkouda, her Berber village, since she was a little girl.

“I’m an old lady, I lived in the old days and I can tell you, nothing has changed here. We still live in the same way,” Hafid said.

Hafid’s village is only reachable by a single dirt road, more than 30 miles from the nearest town. The majority of Kourkouda women spend their lives spinning and weaving intricate handmade Berber rugs, which take months to complete. Fadma Aid Hemam, 64, has been making these rugs since she was 7.

“When I finished my first carpet, I felt strong and powerful. I felt the joy of learning and knowing how to use my knowledge.” Hemam said.

While integration has been slow in Morocco, women in Kourkouda remain a testament to their people’s ability to survive and preserve their culture through craft.

The term “Berber” comes from the Greek "barbario" and the latin "barbari," translating to "primitive" or "foreign."

The women of Kourkouda  prefer to call themselves Amazigh, which means “noble” or “free born.”

Though many Amazigh in Morocco continue to feel marginalized from society, the women of Kourkouda take pride in their history.

An enormous rug with the Amazigh symbol hangs behind Hemam’s loom.

“What it means to be an Amazigh? It's my town and my culture, the place where my parents lived, where I've lived myself and where my children live,” Hemam said. “Amazigh is our identity, and we wouldn't change that for anything in the world.”

JP Keenan spent several months in Morocco on an SIT Study Abroad program and produced this story in association with Round Earth Media, a nonprofit organization that mentors the next generation of international journalists. Rim Boudkir contributed reporting.