The daughter of a former high-level Chinese official made some news earlier this month when she publicly apologized for her role in a notorious murder that took place during China's Cultural Revolution. The 1968 killing of a Beijing high school principal is the subject of a moving 2009 documentary film by Hu Jie, whose body of work puts a human face on some of the worst horrors of the Communist Party's recent history.

The apology came from Song Binbin. And it was the latest in a series of examples of people coming forward to ask for forgiveness for their actions during the chaos of the Cultural Revolution. Her case attracted attention in part because of her family background — though Song is not the first person from a prominent Communist family to say she was sorry for contributing to the political violence of those tumultuous years.

“Please allow me to express my everlasting solicitude and apologies to Principal Bian,” Song is quoted as saying. “I failed to properly protect the school leaders, and this has been a lifelong source of anguish and remorse.”

The story of the beating death of Bian Zhongyun and its aftermath is movingly told in the documentary film called, "Though I am Gone." (See the trailer below.) It was shot by Chinese documentary filmmaker Hu Jie. In the opening scene, Hu asks Bian's widower Wang Jingyao, a photographer himself, something as obvious as it is troubling.

"It must have been traumatic for you to take pictures of your wife's body,” Hu is heard saying, just off-camera.

"Definitely," Wang answers. "But I was determined to record the truth of history." 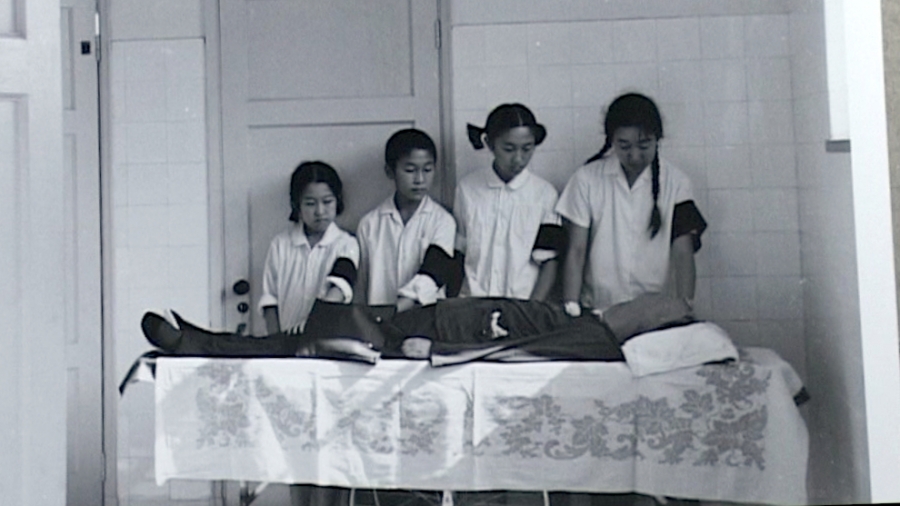 Bian's children mourn the death of their mother, as seen in the documentary "Though I am Gone."

That statement goes a long way to explain Hu Jie's own approach to documentary filmmaking.

"Though I am Gone" is devastating in its details. The 48 year-old deputy high school principal knew she was in danger. But Bian Zhongyun refused to flee Beijing, because she "did nothing wrong."

Eventually, schoolgirls with the Red Guards set upon Bian with homemade weapons, including spiked clubs. Wang, her widower, got the news of her death in a phone call that evening. So, he gathered his four young children — and his camera — to go retrieve his wife's body from the hospital.

The only time Wang breaks down in front of Hu's camera is when he talks about being at home with his daughters and looking out the window. This is long after Bian is gone. But the family still finds itself waiting and watching for the murdered woman, impossibly, to come home.

This is this kind of simple human moment that makes Hu Jie's films so powerful. He has done it again and again, by capturing personal stories of trauma and suffering from China’s recent history.

In November last year, I had the chance to meet Hu Jie at his family's apartment in Nanjing. He welcomed me with a strong handshake and some green tea. He's got working man's hands and he's not overly tall. But Hu seems like he would be tough to knock over. His build matches his square, bearded jaw. And his eyes are warm and serious at the same time.

His wife, Jiang Fenfen chimed in, saying "all the girls wanted to find a soldier to marry in those days. Not a professor, not a teacher. But a soldier." The two met during Hu's army days, when they ended up taking the same painting class.

Hu's job with the army, though, was maintaining MiG-21 fighter planes as a mechanic. Later, he was sent to work in the army's propaganda department. That's where he started learning video editing.

When he got out of uniform, Hu landed a civilian job with the state-run news agency, Xinhua, where he had access to a video camera. In his spare time, Hu kept the camera rolling. And eventually, that got him fired.

"In China," Hu told me, "there aren't many films that tell the truth."

So, for the last 20 years, he has been on a personal mission of sorts to rectify the situation. Hu has made films about people, coal miners and migrant workers, being evicted by developers. But he has focused most of his energy as a filmmaker on the period of Communist Party history from the late 1950s through the 1970s. Denunciations, purges, famine and political violence characterized those years.

Hu Jie's 2009 film, "East Wind State Farm" profiles a handful of survivors from a farm labor camp in rural, southwestern China. These individuals were Communist Party members who were purged in the late 1950s, and labeled "rightists." Nearly 200 people died at this single location. Those who lived spent more than 20 years in the camp before getting an official pardon.

The government admitted they were wrongfully accused of being bad communists. In the words of one of Hu's interviewees, “it was a historical joke.”

I asked Hu if he's taken much heat from Chinese authorities because his films so directly challenge the official history.

"China has passed through the stage of totalitarianism," Hu said. "There are many more opportunities today."

Hu told me he never thinks of the risks that come with his style of filmmaking, but the authorities seem keen to remind him that they are paying attention. Hu said he has been visited many times by state security agents. "They're always polite," he said, and nothing more serious has come from those visits, so far.

In a sense, the Chinese government tolerates Hu’s film work. But they certainly don’t make it easy for people to see his work in China. Hu’s films have been shown at independent film festivals in China, but not in theaters or on television. And he said that several attempts to distribute them online have been blocked.

"Hu Jie is one of the most important filmmakers in China," said Karin Chien of dGenerate Films, an American company that distributes Chinese titles, including two of Hu's films. But his audience in China is not very big, she said.*

“It's dangerous to look at the past," Chien explained. "I don't think it's a question of whether Chinese audiences want it or not, I think it comes down to control of information, you know, control of the grand narrative.”

Many stories from China's recent past, of course, will never be told. Hu told me that only a handful of people in China are making independent historical films. And in his own experience, most people who Hu approaches won't agree to speak with him. People are just too nervous about talking on camera and taking the risk of getting into trouble. But the ones who do tell their stories, Hu said, these people are real heroes.

"They suffered through so much horror and violence," Hu said. "Then, they recounted those experiences honestly and calmly.

"If I had never made these documentaries, no one would know how these individuals lived through such tragedy with resourcefulness and energy, and a sense human dignity. I find these personal stories inspiring," he said.

And he thinks others will too.

A previous version of this story misspelled Karin Chien's name.