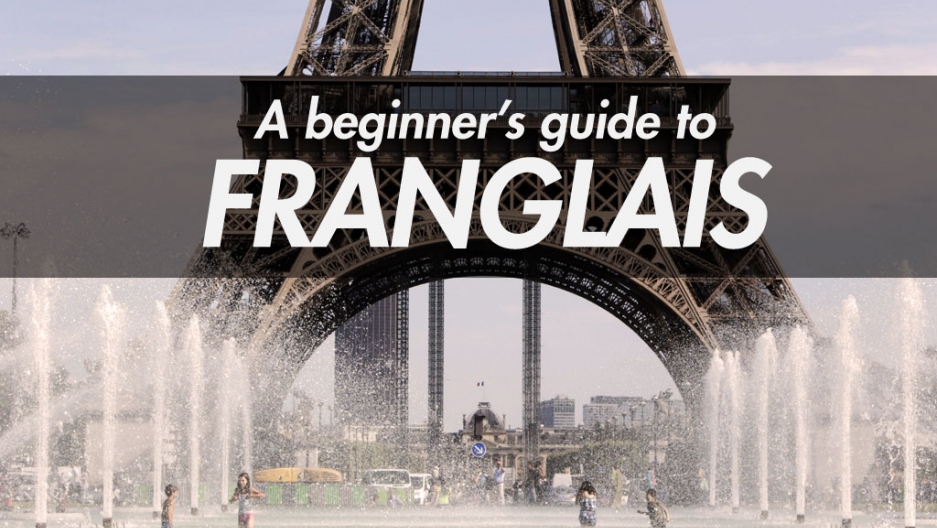 PARIS, France — Do you want the good news or the bad news first?

The good news, at least for people who don’t speak French: You’ll hear lots of English in France. The bad news: You won’t understand it.

If Anglophones love to pilfer from other languages (pilfer: from the Old French pelfrer), the French like to add their own je ne sais quoi. No, really: without some help, you wouldn’t savoir quoi they’re on about.

More from GlobalPost: A beginner's guide to Urdlish

In the spirit of mutual mistranslation, here’s a brief glossary of the weirdest “English” words you need a French dictionary to understand — not to mention a few bons mots we’ve adopted in English that just won’t fly in France.

listen to ‘'Un after work' ’ on Audioboo

Le brushing (n). A professional blow dry in a hair salon. It comes after your shampooing (shampoo) and après-shampooing (conditioner).

Le cocooning (n). This seems to be a term invented by marketers with the aim of selling women casual clothes they don’t really need. It means, roughly, staying in and being cozy.

Le fooding (n). A Frankenstein’s monster made of “food” and “feeling,” and meaning something along the lines of eating well.

Le footing (n). Jogging. Because you use your feet…?

listen to ‘'Le footing'’ on Audioboo

Le forcing (n). A sustained attack on your opponent, for example in sports or business.

Un hard-discounter (n). A discount store. I defy any native English speaker to have a clue what a French person is on about the first time you hear them mention the local “ard-diss-coont-air.”

listen to ‘'Hype'’ on Audioboo

Le jogging (n). Confusingly, this can but doesn’t necessarily refer to jogging (that would be footing, above) — it means what you wear while you’re jogging, i.e., a tracksuit.

Le looping (n). To go loop-the-loop on a roller coaster.

listen to ‘'People'’ on Audioboo

Peps (n). Used just like the English word pep, but the French have more of it.

Un pin’s (n). A pin or badge. BUT WHY IS THE APOSTROPHE THERE? WHY?

listen to ‘'Le Planning'’ on Audioboo

Une pompom girl (n). A cheerleader. Try breaking it to the French that men cheer too.

Un recordman, une recordwoman (n). An athlete who holds the record in their event.

Relooker (v). To give someone or something a makeover. The person giving you it is a relookeur (male) or a relookeuse (female).

listen to ‘'Relooker'’ on Audioboo

Un rugbyman (n). In British English, you might expect to hear this phrase in a sentence such as: “He’s more of a cricket than a rugby man.” In Franglais, it means a rugby player. Likewise tennisman and its wrong-in-every-way plural, tennismens.

Un talkie-walkie (n). What’s the difference between a talkie-walkie and a walkie-talkie, you might ask? There is none. The French just decided to switch the words round, for reasons best known to themselves. Use a pair and you’ve got yourself some talkies-walkies.

Un shake-hand (n). You mean a handshake. In fairness, I’ve never heard anyone use this by now outdated term, but it goes to show that French people have been entertainingly reinventing English since at least 1835.

Un shooting (n). A film shoot. You hear that, France? A shoot, period. You’ll have noticed by now that the French have a compulsion to add “-ing” to any and every English word they get their mains on.

Un smoking (n). A tuxedo. It claims its origins from the English “smoking jacket,” but connoisseurs of men’s attire will know that’s not really the same thing.

listen to ‘'Un smoking'’ on Audioboo

Speed (adj). This word has mutated from its English sense into something closer to busy. Thus, you’ll hear many a young French person declare “je suis speed” (literally, I am speed) to mean they’re in a rush.

listen to ‘'Speed'’ on Audioboo

Zapper (v). To channel surf. Because you go “zap” with your remote control, get it?

Bon voyage (exclamation). You might get some funny looks from your French friends as you wave them off on their mini-break: it only really applies to long trips, the kind that involve at least one plane and maybe even a ship. Plus the phrase refers to the traveling itself — if what you really want to wish les amis is a great holiday, you’d be better off trying out “bon séjour.”

Clique (n). We know, we know, ain’t nobody fresher than your clique — but maybe they don’t want to be. See, in French a clique always has more or less sinister overtones, a bit like a cabal.

Encore (exclamation). Demand this at the end of a concert and you’ll leave unsatisfied. You’re saying “again”; a French speaker would ask for “une autre” (another).

Entrée (n). No, the main course in a French restaurant isn’t really, really small. You just ordered a starter — because entrée is an entrance or beginning, ok?

Mangetout (n). A Brit might think they’re asking for snow peas, but all a French market stall holder will see is a crazy person who wants to “eat everything.”

Oh là là (exclamation). Most Anglophones save this for a particularly risqué moment, but for French speakers it serves as an all-purpose exclamation of disbelief, frustration or surprise.

Potpourri (n). Never, ever offer a French speaker the gift of a “rotten pot.”

RSVP (abbrev). Aka “répondez s’il vous plaît,” or “please answer.” A French speaker probably won’t, because the initials risk leaving them stumped — which might in fact be for the best, since the full phrase sounds more like an order than a polite request.

Sautéed (adj). Sauté something, by all means, but describing the result as sautéed is a bit like saying it’s “frieded.”

Soupçon (n). You’re looking for a classy way to say “a little bit,” so you borrow the French word for suspicion or hint. So far, so good; but English speakers have a habit of ignoring the “p” and — as this correspondent has found out to her peril — “soo-son” sounds rather too close for comfort to suçon, the French word for love bite.