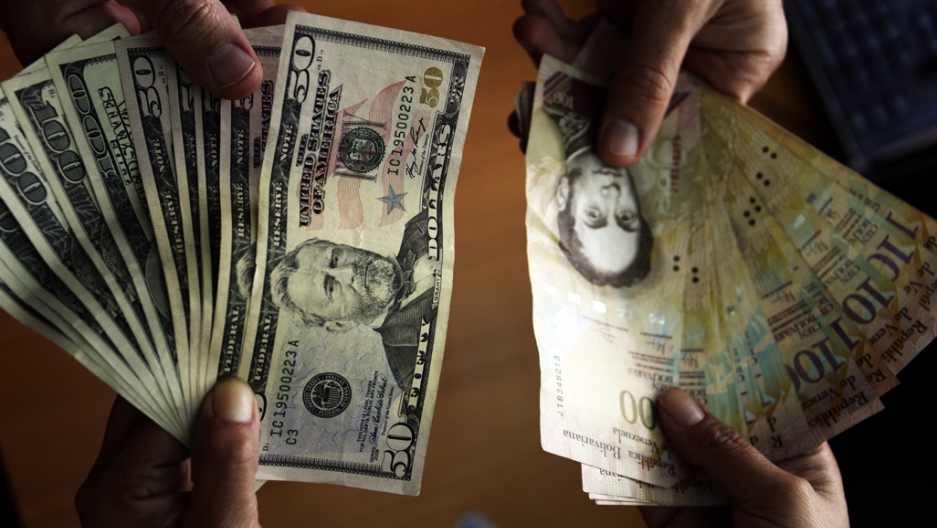 Bolivar to dollar, it's not as simple as it sounds.
Credit: Juan Barreto
Share

The OPEC nation's widely expected reform kept a preferential rate of 6.3 bolivars to the dollar for essential goods such as food and medicine, while doubling the volume of dollars offered at a higher rate of around 11.3 bolivars.

Officials offered few clear details about how they would control the black market rate for greenbacks, now more than 10 times the preferential rate.

Critics predict the measures will simply spur inflation, which hit 56.2 percent in 2013, the highest in the Americas.

More from GlobalPost: Caracas ranks the most expensive city for expats. Here's how insane prices really are

Oil Minister Rafael Ramirez said the new system would crack down on the widespread practice of buying cheap dollars and flipping them on the black market. This diverts billions of dollars of hard currency that could be used to address basic needs.

The new measures expand the central bank's Sicad system of weekly currency auctions by boosting the amount offered to $220 million, from about $100 million.

Expenditures such as travel allowances, airline tickets and remittances — the cash sent back from migrants abroad — previously calculated at the preferential rate will be moved to the less favorable Sicad rate, currently 11.3.

Government critics flooded the Twitter-sphere with vitriolic messages calling the announcements a disguised devaluation — lowering the value of the currency relative to other ones — that will boost the cost of living without solving underlying problems.

Ramirez said he was bemused by the negative reaction from some, and insisted that the 6.3 rate would still cover 80 percent of Venezuela's dollar needs, in the food, agriculture, industrial, health, education, science and technology sectors.

"So we can't call this a devaluation, that is the enemy's spin," he told state TV. "We ask our people for understanding, we would never betray them."

President Nicolas Maduro blames the situation on an "economic war" that he vaguely links to opposition figures and ideological adversaries in Washington, though officials widely recognize the currency controls are rife with corruption.

Maduro has struggled to keep the economy on track while also seeking to maintain Chavez's economic legacy of generous social spending and aggressive regulation of private industry.

The currency plan could fuel inflation for some goods and services, but could reduce shortages if dollars previously destined for foreign travel are freed up to import food and medicines.

Economist Asdrubal Oliveros of Caracas-based Econalitica called the new system a "slow-motion devaluation" that will help shore up state finances by providing more bolivars for dollars sold at the higher rate.

But he said added the measure alone will not resolve the problems created by controls and heavy state intervention.

"The currency shortages will continue until the government recognizes that a fixed exchange rate is not the solution," he wrote on the widely read website Prodavinci.

The announcements were nominally positive for investors holding Venezuelan bonds, the most high-yielding of any emerging market notes, because the new system will reduce dollar outflows and thus signals greater ability to service foreign debt.

But the bond market reaction was muted, with the country's benchmark Global 2027 remaining in negative territory. The black market bolivar rate, however, slipped nearly 10 percent following the news conference, according to one website that attempts to track the price.

Ramirez said the state had created a "dollar budget" that would administer hard currency to ensure it is used for imports that stimulate the economy and not go to shell companies.

He acknowledged that some enterprising foreigners had figured out that by buying bolivars on the black market they could acquire plane tickets at a fraction of the ordinary price due to the huge differential between the two rates.

"We're not going to allow people to come from other countries to buy cheap plane tickets in bolivars. They can pay for them with dollars," Ramirez said.

The government has offered few details on how it will address demand for dollars, which far outstrips supply at any rate offered by the government.

Officials said the Sicad rate may fluctuate somewhat from its current level of 11.3, but declined to elaborate. Past Sicad auctions have simply left the rate fixed despite huge demand, pushing many businesses to seek greenbacks on the black market.

Chavez created the currency controls in 2003 after an opposition-led oil industry shutdown meant to force him from power that nearly bankrupted the government.

Over the years, the mechanism left the exchange rate out of step with prices. The official rate became more of an accounting fiction while the spiraling black market rate, reported by anonymously maintained websites, leaves many items so cheap that it, too, is a poor reflection of economic reality.

A McDonald's Big Mac Combo costs $25 at the lowest official rate, around $14 at the Sicad rate and some $2 at the black market rate.