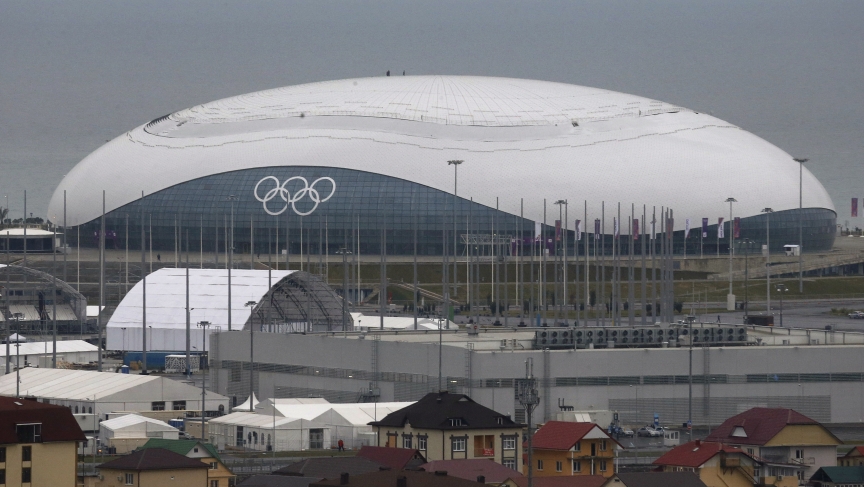 A view of the Bolshoi Ice Palace in the Adler district of Sochi. The building is the hockey venue for the Sochi 2014 Olympics, which begin on February 7th. After the Olympics, it will serve as a sports arena and concert venue.

Vladimir Putin has put his heart and soul — along with billions of dollars from the state treasury — into the Sochi Olympics. And he's managed the build-up to the Olympics with a single-handed, up-close, and autocratic style.

"He put his name and fingerprints all over it since the very inception of the Sochi Games," says Fred Weir, Moscow correspondent of the Christian Science Monitor. He says Putin made a passionate personal pitch to the International Olympic Committee, "in English, which he'd been secretly studying, just for this purpose."

Sochi is set to be the most expensive Olympics ever, summer or winter. The Russian government puts the figure at $51 billion.

The 2010 Vancouver Olympics cost $7 billion. And some critics believe the cost is even higher than the official figure.

Much of the money has gone into ski resorts, roadways, rinks and power plants. But much has been lost through graft and corruption.

Putin appears to have consistently signed off on the cost overruns, says Weir. "He's made it really clear that he sees the Sochi games as his project, and to a great extent, his legacy as leader of Russia."

Weir says this all speaks volumes about Russia today. "The fact that one person can put his mark on it, to this extent, tells you that this is still very much a one-man ruled state."

It also speaks to Putin's own strategy, says Weir, "which is to use big, high-profile events like the Olympics to drive Russia's development, to change the world's image of Russia. This is all part of a grand scheme of his to bring Russia back on the world stage as a major player, and a country to be respected."

But there are image problems. Putin has clamped down on political opposition and the free press and used Kremlin-controlled TV to convey his nationalistic view of the Olympics.

The one-time KGB officer has come in for plenty of criticism, over everything from gay rights to his treatment of the band "Pussy Riot." But he plows on, undeterred.

However, Weir says ordinary Russians are proud of the fact they're hosting the Olympics, according to opinion polls. "And despite all the corruption and all the other problems, Sochi is ready."