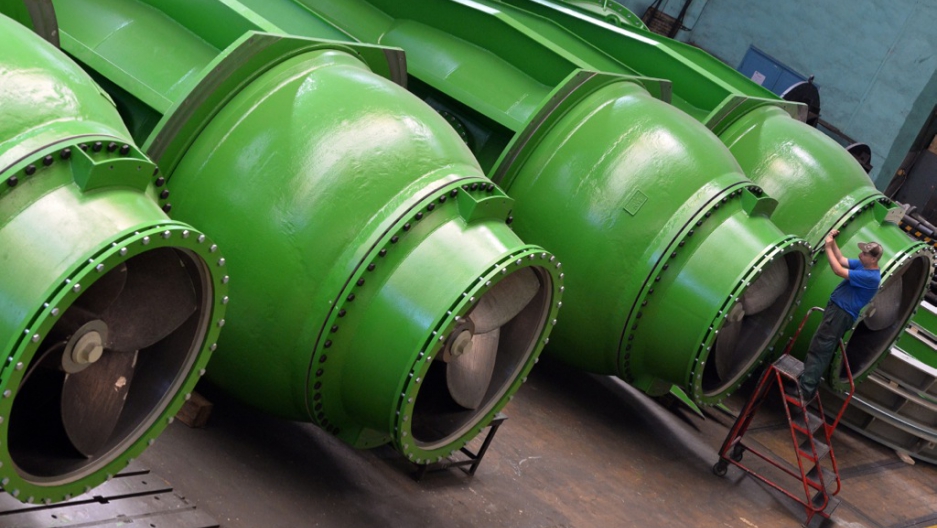 A man works on one of seven giant water pumps produced in Budapest for a Russian nuclear plant. A new $14-billion deal with Russia is set to double the capacity of Hungary's only nuclear plant.
Credit: ATTILA KISBENEDEK
Share

BERLIN, Germany — A leading Hungarian official has said an agreement last week to give Russia a foothold in his country's nuclear future is Budapest's best deal in 40 years.

The funds would be offered as a 30-year loan package to be extended at below-market rates.

But one person's bargain is another's Faustian deal — in this case at least. Critics say the sweetheart deal may as well have been written by Mephistopheles, the demon of German folklore.

They say the project was never tendered for competitive bids despite an earlier expression of interest from the French energy company Areva. Skeptics worry it represents an effort by Putin to add nuclear energy to the oil and gas monopoly he's used so effectively to cement Russia's influence in Central and Eastern Europe.

“What are Hungarians to make of the fact that Prime Minister Viktor Orban has committed them to invest [billions] building two new nuclear reactors without consulting his own cabinet let alone parliament, industry experts, or the Hungarian people?” asked a pointed editorial in the English-language Budapest Beacon.

Orban maintains that the deal meets European Union regulations. But the opposition has demanded an extraordinary session of parliament be convened to discuss its terms and implications.

The prime minister has already been forced to retract an earlier statement he made claiming that the European Commission had approved the deal, amending it to say that the regulatory body has made no objections to the pact.

“It is too early to say [whether the agreement meets EU regulations],” a spokeswoman for the commission told GlobalPost in an email. “We are looking at the issue now and will let you know when the legal analysis has been completed.”

The EU's 2004 “Public Sector Directive” mandates that public works projects in the energy sector must be open to competitive bids, and Hungary's own laws on government procurement require open tenders unless there are reasons why the project can only be carried out by a specific contractor.

However, Orban has suggested that as the expansion of an existing facility, rather than a new project, the Paks contract isn't subject to the regulation. Moreover, Rosatom was said to be the only company to offer financing in discussions with companies ahead of the decision not to open a bid, Hungarian media reported.

The European Commission's decision about the agreement's compliance could have far-reaching implications.

In 2012, allegations of corruption surrounded the Russian bid to expand the Czech Republic's Temelin nuclear reactor due to the involvement of a Czech firm under investigation for insider trading and breach of trust in connection with previous deals. Now it looks doubtful that project will go forward at all, according to Czech media.

Similarly, a Russian project to build a 2000-MW nuclear plant in Belene, Bulgaria, was excoriated as “a corrupt and completely illegitimate business project, aimed at producing abundant and expensive electricity in a country with excess capacity in a region of declining electricity demand,” in the words of Ognyan Minchev, a research fellow with the German Marshall Fund of the United States’ Balkan Trust for Democracy. The Bulgarian parliament voted to scrap plans for the reactor in February last year following a protracted debate over its environmental impact and a new investigation into the projected costs.

Specific allegations of corruption have yet to be leveled at the Rosatom deal, and a spokesman for anti-corruption watchdog Transparency International's office in Hungary said his organization lacks sufficient information to make a judgment. However, corruption is a generalized concern in both countries: Hungary already ranks a mediocre 47 out of 176 countries on the watchdog's Corruption Perception Index and Russia an abysmal 130.

Russia already enjoys a near-monopoly over Central European gas supplies, providing three-quarters of the gas used by Hungary and the Czech Republic and two-thirds of Ukraine's.

Putin has made no bones about using that dominance for commercial leverage or as a weapon of foreign policy. In 2006 and 2009, for instance, Russia cut off gas supplies to the Ukraine in the middle of winter during disputes over prices, leaving customers across Europe to freeze until their countries coughed up more cash.

In March last year, critics argued that Russia purposefully drove up energy prices in Bulgaria to engineer the fall of Prime Minister Boyko Borisov's government after he terminated the controversial Russian-run nuclear power plant in Belene.

And any possibility that Ukrainian President Viktor Yanukovych may cave to the ongoing protests in his country for greater integration with Europe has been all but eliminated by Russia's energy monopoly, says Jonathan Stern, an oil and gas expert at the Oxford Institute for Energy Studies.

“What Putin said, as far as I can see, was not 'we'll turn off the gas,' but 'if you want to align yourself to the EU, then you will be paying the price that the EU pays,'”he said.

“The reason Russia is able to do this is that these countries have not made sufficient efforts to diversify their imports.”

If history is any guide, Russia will make sure that nuclear power doesn't change that.