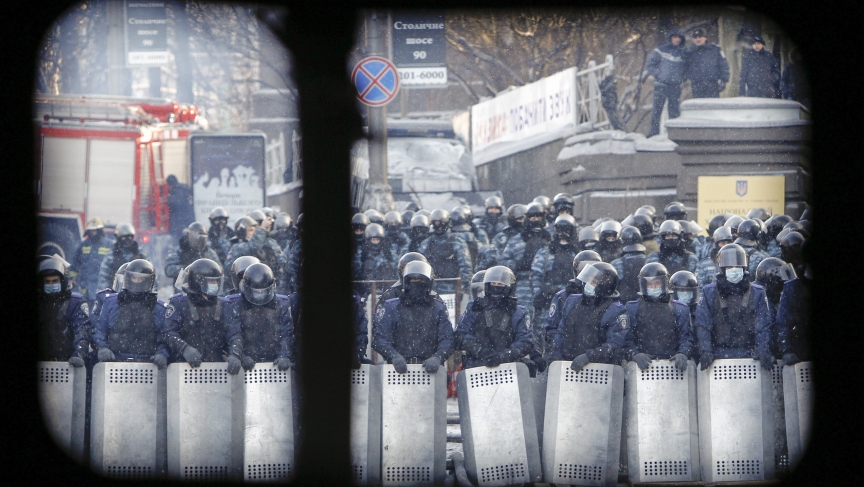 Ukranian police are seen at the site of clashes with pro-European integration protesters in Kiev January 23, 2014. Ukraine's President Viktor Yanukovich on Thursday called for an emergency session of parliament to end the crisis in the country.

You know a lot's at stake in a demonstration when protesters are not scared off by sub-freezing weather. That cold provides the backdrop in the struggle for the future of Ukraine.

Protesters in several Ukrainian cities defied authorities by occupying government buildings Thursday, something they've been doing in Kiev for some time. This comes after two months of mostly-peaceful protests against President Viktor Yanukovych turned deadly earlier this week.

If you remember, Yanukovych sparked massive demonstrations when he rejected closer ties with the European Union. But it's more complicated than that in this former Soviet republic.

That's the word from Kateryna Kruk. She's a political scientist, and one of the protesters who has been occupying Kiev's Maidan Nezalezhnosti, better known as Independence Square. We reached her on a cell phone in the protester-occupied City Hall. She was warming up from being out in the cold, protesting in Maidan. But while her body may have been cold, her spirits were up.

"Knowing that you are not alone in your struggle gives you a lot of energy and enthusiasm," she says.

She says the protesters are now fighting for more than an association agreement with the European Union. She says it's now about the idea of democracy, what European values mean to the country. The protest, she says, is about human rights.

Kruk says it was relatively calm in Kiev Thursday. That's mostly due to opposition leaders and the government brokering a temporary truce. The hope was the two sides could negotiate and narrow their differences.

But the BBC's David Stern, who's in Kiev, doesn't see that happening.

"The problem is the two sides don't really have positions that can be brought together. The opposition is demanding President Yanukovych's ouster. They want Ukraine to turn towards Europe. And President Yanukovych is saying no to all these things," Stern says.

Stern says you can't look at it as a simple decision between east and west.

"There are a lot of things going on," he adds.

Going on indeed. And the movement is spreading. Check out this Storify for more: