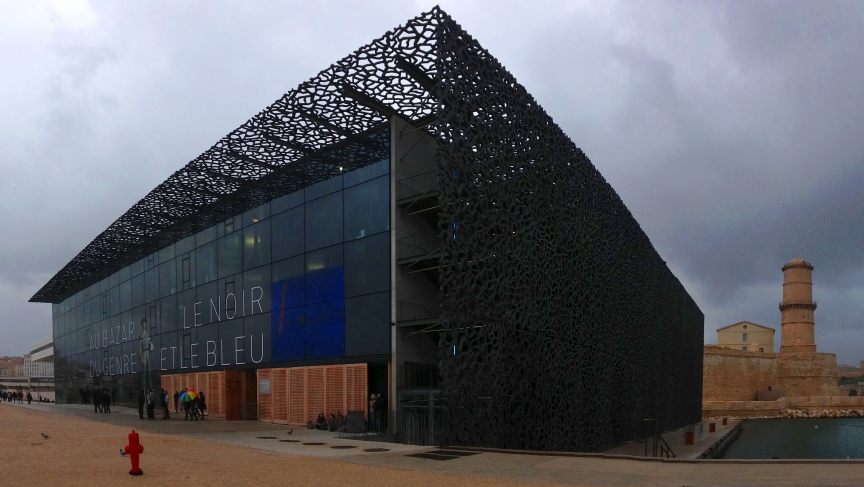 Marseille was Europe's Capital of Culture in 2013, receiving hundreds of millions of dollars from the European Union to boost the arts. The new Museum of Mediterranean and European Civilizations was the city's center piece.

The southern French port city of Marseille has taken a bad rap for years.  It’s known for thefts, violence and organized crime.

But the city had a chance in 2013 to clean up its act, by being Europe’s rotating Capital of Culture for the year. The title means money from Europe to spiff up and boost local arts.

Apparently it helped bring in more tourists. But the jury is out on whether Marseille is safer now, and whether local artists benefited from all the hooplah.

The centerpiece of Marseille’s year has been a brand-new, imposing waterfront museum dedicated to European and Mediterranean civilizations. It was paid for mostly with European subsidies.

The owner of a local cleaning business, Atenniere, is here with his family.  He said his new museum makes him proud.

“This museum has an importance beyond Marseille for all of Europe and beyond,” he said. "You see all about Mediterranean history inside, from fishing to arts and crafts and so on.”

The museum alone cost hundreds of millions of dollars. Everyone seems to like it.

But some struggling local artists, such as painter Nicolas Ramelle, said all that money from Brussels would have been better spent supporting them.

“It’s a bit tricky,” he said. “I think it helped getting people to know the other side of Marseille. But I think as far as culture is concerned, it deviated small money that was meant for underground structures, and rearranged it to big structures that didn’t really need it.”

In other words, big museums, and established artists who didn’t really need it.

Ramelle said dozens of local art cooperatives actually saw their funding go down during the “year of extravagant spending.” In some cases it dried up altogether.

Across town, the city booted dozens of artists from a series of abandoned buildings they’d used as studios.  Today, it’s been spiffed up and kitted out as a skate-park.  There’s still art spaces, but now artists have to rent studios, said a young skateboarder named Benjamin Branaya.

“I believe that the Capital of Culture program was a bunch of nonsense,” he said.  “Sure, there are a lot of things happening in the art world now, but you have to pay to see them.”

And he said it's very expensive.

The city defends its new art projects. But officials grapple with another problem: Marseille’s reputation as a crime-ridden haven for ruthless mobsters and drug gangs.  And that’s kept some tourists away.

A typical French news report on Marseille often covers murder or other crimes.  This gets locals mad. They say the media dumps on them.

“We’re not just about organized crime,” said a man named Germain outside his downtown photo studio. “Marseille is a beautiful city,” he said, “with great potential, with lots of things to see.”

If you look at crime statistics for Marseille, Germain seems to have a point. In 2012, for example, the city had 24 murders - total. That’s it. Compare that to US cities of similar size: Jacksonville, FL, had about 90 murders in 2012. Indianapolis, the same.

So why the bad rap?  One reason is that nearly all of Marseille’s murders last year were carried out with Kalashnikovs. That is, AK-47 assault rifles.

Apparently they’re the weapon of choice among the city’s drug gangs and mafiosos. And when firepower like that is used on city streets, it makes national news.

“But the violence is very targeted,” protested Kati Boix, the owner of a local lock store.  “There are maybe 10 or 20 people behind all of it,” she said.  “We regular folks have nothing to do with it.”

That message may just be getting out, helped by the Capital of Culture project. The city of Marseille says museum visits in 2013 doubled.