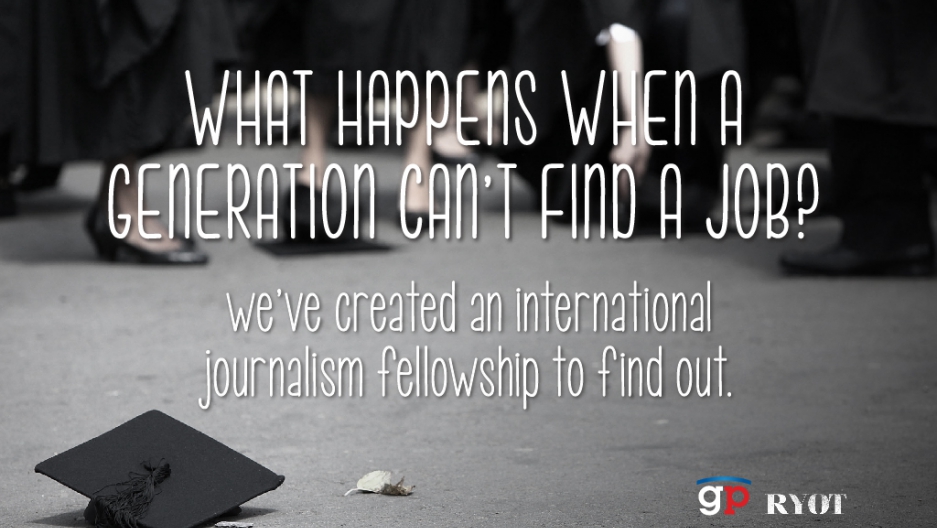 BOSTON — We received more than 400 applications for the GroundTruth Reporting Fellowship on Rising Youth Unemployment, full of great ideas. Applicants from 77 countries proposed stories in 90 countries across six continents.

We have carefully read every application and after many meetings, several spreadsheets and much caffeine, we have narrowed down the field to 40 finalists, listed below. These finalists will now compete to carry out reporting projects in 10 countries. All finalists will be contacted directly with a set of questions, and the answers to these questions will inform the selection of the fellowship recipients, to be announced in early February.

We and our partners at RYOT News sincerely wish we could grant fellowships to everyone who applied — we will continue to explore ways to expand the project in the year ahead.

Summaries of the finalists’ ideas are also listed below. You can also see the their ideas on Tumblr, where we invite you to share your thoughts on the ideas.

Finalists (in alphabetical order) are:

Here is a selection of the finalists’ ideas:

Vanessa Johnston — Italy
“In Italy, where youth unemployment is at record levels, many young people are taking advantage of their country's greatest assets - its wine, olive oil, and food production - to turn themselves into agro-entrepreneurs. How much opportunity could this sector provide to Italy's ‘lost generation?’”

Christopher Livesay (@clivesay) — Italy
“A tale of two Italies – one whose native young are hamstrung by over 40 percent youth unemployment, and another that receives tens of thousands of migrants every year from countries plagued by war and poverty, most of whom are young men in search of work. Neither group wants to stay.”

Carter McCall and Mika Chance — Spain
“Throughout the 20th century, squatting has been a form of civil disobedience for young Spaniards. After the economic crash, unemployed Spaniards are turning to squatting out of necessity, forming new, self-reliant communities in unoccupied apartment complexes and uncultivated farmland across the country.”

Valerie Hopkins (@Valeriein140) and Edona Peci (@EdonaPeci) — Kosovo
“In print and video, we will examine what 70 percent youth unemployment means in Kosovo, where 70 percent of the population is under thirty and more than half is under 25. We’ll focus on young leaders who are harnessing technology to provide opportunity to the country’s first truly post-war generation.”

Elizabeth Herman and Velma Saric (@velmmina) — Bosnia-Herzegovina
“This report examines the staggering rate of youth unemployment (57%) in Bosnia and Herzegovina, using it as a point of entry to examine the ethnic tensions that persist two decades after the Bosnian War.”

Rachel Hoffman (@rachelikewords) and Cindy Huang (@chuang2012) — South Africa
“Our story examines the impact of detention and incarceration policies on young people's ability to obtain work in South Africa. Through the story, we hope to enrich the discourse surrounding how policymakers and community leaders can work to stop the cycle of crime and poverty in South Africa.”

Lauren Bohn (@LaurenBohn) and Chika Oduah (@ChikaOduah) — Nigeria
“A multimedia look at how Nigeria’s millennials are combating woeful inequities with crime, religion, and, at their best, politics and art. In an increasingly vital, though tenuous, oil-rich country, the stakes are high for a generation — and a country — whose fate is yet to be determined.”

Kareem Haruna (@kareemogori) and Emmanuel Julius — Nigeria
“A look at the intersection of youth unemployment, terrorism and the lack of electricity that has darkened northeast Nigeria in the past decade and fueled the creation of militant Islamist sect Boko Haram. If we had power, could we create jobs and opportunities to curb radicalization?”

Monica Ibrahim (@Monica_Ibrahime) and Menan Khater (@Menannn1) — Egypt
“Despite the worsening employment status in Egypt and the growing political turmoil, Young entrepreneurs have emerged to address the government shortcomings. The report will shed light on the emerging entrepreneurial sector in Egypt, the challenges and the promises. It is presenting entrepreneurs' journey toward fulfilling their dreams and combating unemployment.”

Laura El-Tantawy (@lauraeltantawy) — Egypt
“This project explores how a small Egyptian village in the Nile Delta has transformed itself from a traditional, agriculturally dependent economy to a thriving mini metropolis through trade in Chinese-made products.”

Yeganeh Salehi (@yeganehsalehi) and Maryam Rahmanian — Iran
“An in-depth look at how youth unemployment is transforming Iran's traditional values, changing gender roles in a male dominated society. Women are gaining ground, but there are also troubling effects that are going largely ignored that will be investigated in this project.”

Eleanor Stanford (@elucylinnet) and Saila Huusko (@sailajohanna) — United States
“This project explores what youth unemployment means for traditionally blue-collar communities in today’s United States. Through multimedia and written word portraits, it will tell the stories of 6 young unemployed men in towns that have felt the full force of America’s industrial decline: Gary, IN, Youngstown, OH, and Buffalo, NY.”

Molly Ferrill and Johnny Wu — United States
“A short video piece on the young generation's struggle with unemployment and lack of opportunity on the Pine Ridge Reservation in South Dakota. The piece will follow several Lakota youth as they work to create a future for themselves in the face of extreme poverty, isolation, and pervasive generational trauma.”

Morgan McBride — United States
“I hope to build an articulate photographic essay on the unemployed youth demographic in Detroit. Using the photographic medium, city image archives and a compelling written component I hope to tell an important, multi-dimensional story of violence, corruption, inequality, tenacity, strength and pure grit among the youth of Detroit.”

Gayathri Vaidyanathan (@gayathriv) and Mirela Iverac (@mirelaiverac) —India
“In India’s most populous state, colleges churn out educated young men for whom there are few jobs. Some return home to villages and take up farming or other types of agricultural labor. Others enter politics, which is seen as the lottery ticket out of the intergenerational cycle of poverty.”

Coleen Jose (@coleenjose) — Philippines
“I will examine how this rising economy is leaving behind millions of its unemployed youth by failing to support their technologically driven endeavors. This project will uncover how the most digitally engaged group on the planet is raising issue and innovation through social media.”

Juanita Ceballos (@jceballosv) and Jika González (@JikaGlez) — Cuba
“We want to tell the story of how today’s Cuban youth is circumventing an old and decayed system by taking alternate paths, not only to make ends meet but to make careers for themselves. We want to produce a collage of voices that paints the reality of Cuba’s youth.”

Corinne Chin (@CorinneChin) and Fabiano Leal (@fabianohtl) — Brazil
“Geração nem-nem – "generation neither-nor" – is growing. One in five young Brazilians neither attend school nor work. In Rio de Janeiro's favelas, that number rises to 34%. They're losing faith in their country: “Imagina na Copa,” locals say – imagine how much worse it'll be during the World Cup.”

Anna Clark (@annaleighclark) and Jordan Fletcher (@fletchjordan) — United States
“Unwilling to be marginalized, young people in Detroit fight to remake their communities – and their futures – even as the city itself struggles to survive.”

Rob Hart (@robhartphoto) and Monika Wnuk (@Monzagnes) — United States
“Chicago is in the top 20 percent of U.S. cities with high rates of unemployment, and crime. We'd like to explore how crime and its aftermath affects economic outcomes of the city's residents. We aim to find the names you don't know but the faces you cannot forget.”

Yana Kunichoff (@yanazure) and Lucio Villa (@luciovilla) — United States
“We propose to look at the overlap between youth violence and youth unemployment in three American cities. Our focus will be on America’s urban youth of color, the way policies targeted at unemployment and violence affect them, and how young people themselves use activism to fight disenfranchisement.”

Emanuela Campanella (@emacampanella) — Italy
“Italy is losing its best and brightest to a decade of high youth unemployment. A series of video features will be produced on young italian immigrants that will shed light on their motivations and reasons for leaving. ”

Tik Root (@tikroot) and Juan Herrero (@DustWeAre) — Spain
“Far from cameras and reporters, the plight of young people in rural Spain — where youth unemployment rates climb over 90 percent — has gone largely unnoticed. Focusing on a northern region and southern province, we hope to paint fuller picture of Spain’s ‘lost generation.'”