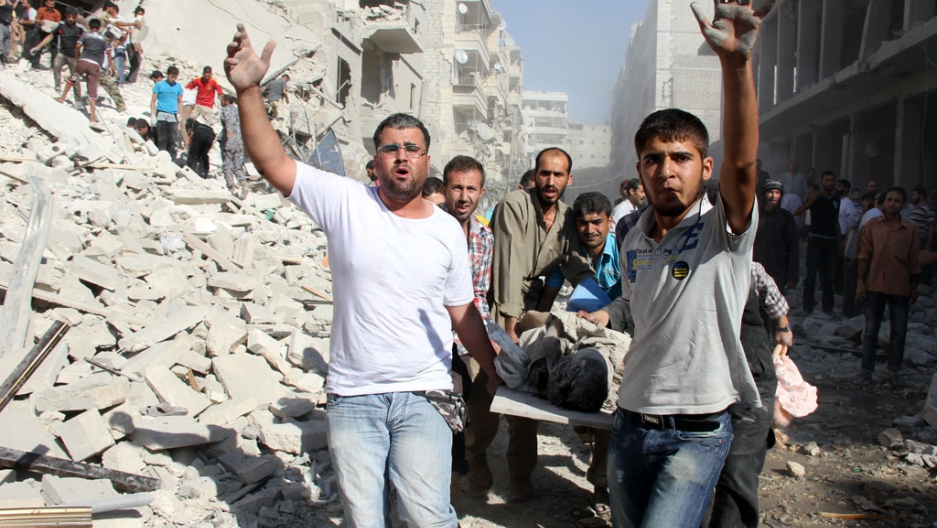 Syrian men evacuate a victim following an air strike by regime forces in the northern city of Aleppo on August 26, 2013.
Credit: AFP
Share

BEIRUT, Lebanon — Everyone's been trying to get the Syrian regime and the opposition together for peace talks since the first attempt failed 18 months ago.

On Wednesday, it finally happened.

It might sound like a step toward ending the conflict, which has so far killed more than 130,000 people. But in reality, the conference has little hope of achieving more than its predecessor. Here’s why:

1) Only a small fraction of Syria’s opposition is involved

The Syrian opposition is not one united force fighting for peace and democracy. There are hundreds of splintered groups with different leaders, goals and strategies. Many are grouped together under loose banners of allegiance that reflect common goals. Others pretty much do their own thing, and sometimes they spend more time and resources fighting each other than they spend fighting their common enemy.

Most of these were not even invited to the peace talks, including the leaders of the Kurdish forces — an ethnic group that accounts for about 11 percent of the Syrian population and now controls a significant amount of territory in Syria’s north. The many extremist organizations — including those affiliated with Al Qaeda — which control a significant chunk of the country, were also left out.

Even among the opposition groups that were invited, some refused to attend unless Syrian President Bashar al-Assad first resigns. Such a stance has caused further rifts between the invitees who agreed to attend the talks and those who rejected them.

2) Even Iran, a key player, has been left out

Iran is Assad’s strongest ally. In an unexpected move, the UN on Sunday invited Iran to attend the talks. But then, perhaps less unexpected, it withdrew the invitation on Monday after pressure from the United States, Saudi Arabia and others. Iran refused to sign an agreement that called for the removal of Assad and the formation of a transitional government.

The problem with leaving out Iran is that it plays a major role in the conflict. By all accounts Iran supplies a large amount of the weapons, training and intelligence used by the government to fight the opposition. If the Syrian delegation does agree to a ceasefire without Iran’s approval, there would still undoubtedly be a strong pocket of Assad supporters willing to fight on with Iran’s support.

3) At this point, a ceasefire is unlikely to end the bloodshed

As nice as it would be to believe a peaceful end to the 3-year bloody battle for Syria is at hand, in reality, it's a long way off.

The Syrian opposition, at least the portion of it attending the peace talks, said it won't agree to any resolution without the resignation of Assad. Assad has said just as clearly that he will not step down, and given that he still controls the majority of the country this stance is unlikely to change.

If the attending rebel groups can somehow reach an agreement with the Syrian regime, there is still the not so small matter of the large network of Al Qaeda militants that now control more territory — according to Syrian civilians still living in the country — than any rebel group attending the conference. If a peace agreement can be reached in Geneva, it would be a large step forward but would still be a far cry from ending the conflict on the ground.