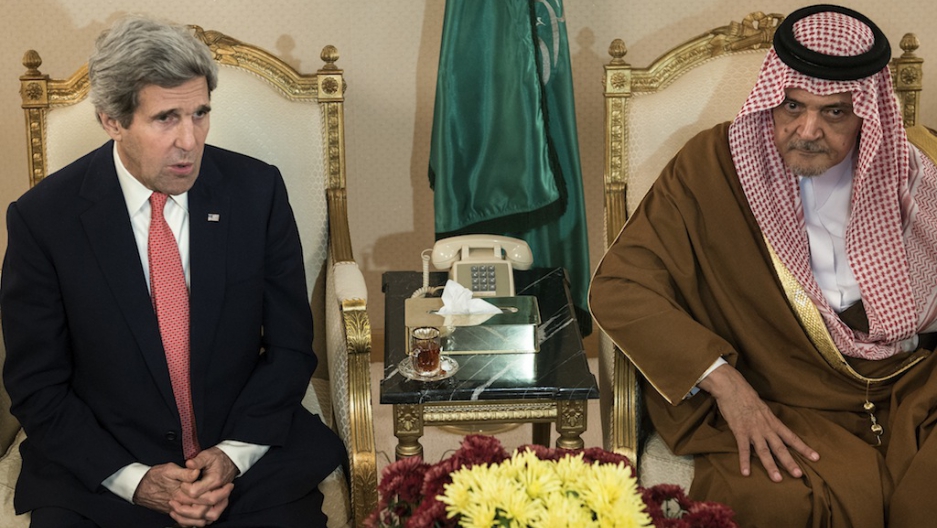 All the key players were at the table in Switzerland as the Syria peace conference began in Montreux on Wednesday.

Ban issued the last-minute invite after he was assured by Iran's Foreign Minister Mohammad Javad Zarif that the country would "play a very positive and constructive role."

By Monday evening, with the Syrian opposition threatening to withdraw from Geneva II, and  the United States and other Western powers urging the UN to rescind its invitation, Iran had lost its spot at the Syria peace talks.

The United States and other western powers opposed Iran's attendance based on its refusal to accept a communique — adopted at the first Geneva talks on June 30, 2012 — calling for a transitional government in Syria.

But perhaps no one was more enraged at the idea of sharing a table with Iran than regional powerhouse Saudi Arabia, which is a major supporter of the Syrian opposition and a historic foe of Iran.

Iran did not "announce officially and openly its agreement (to)... the creation of a transitional government," the Saudi government said on Monday in an official statement.

This rendered Iran "unqualified to attend."

Riyadh’s response should come as no surprise. Oil-rich Saudi Arabia and Iran are not only divided by the Persian Gulf, but also along religious lines.

Both countries have been locked in a cold war for decades as they battle for religious, political and economic dominance in the region.

To better understand this rivalry, GlobalPost selected four articles explaining the complex relationship between Saudi Arabia and Iran in the context of the United States, Syria, the Arab Spring and the recent nuclear deal with Tehran.

Milani wrote: "Iran and Saudi Arabia are neither natural allies nor natural enemies but natural rivals who have long competed as major oil producers and self-proclaimed defenders of Shia (Shiite) and Sunni Islam, respectively. Until the Iranian revolution in 1979, their rivalry was managed and controlled by the United States, with whom they were both strategic allies.

"But after the Shah was overthrown, Saudi Arabia’s leadership became frightened by the Ayatollah Khomenei’s denunciation of the Saudi monarchy as antithetical to Islam and his ambition to export to the revolution to the Arab world. Saudi Arabia remained an ally of the United States; Iran became an implacable foe. Thereafter, the rivalry between Iran and Saudi Arabia became defined by the new US strategy – ally with Saudi Arabia to offset Iran."

"Rivals — Iran vs. Saudi Arabia" Q & A with Middle East scholars Christopher Boucek and Karim Sadjadpour in the Carnegie Endowment

Gause wrote that Iran's nuclear ambitions were not the Saudis' only concern: "They have a more profound fear: that geopolitical trends in the Middle East are aligning against them, threatening both their regional stature and their domestic security. The Saudis see an Iran that is dominant in Iraq and Lebanon, holding onto its ally in Syria, and now forging a new relationship with Washington — a rival, in short, without any obstacles to regional dominance, and one further emboldened to encourage Shiite populations in the Gulf monarchies, including Saudi Arabia, to oppose their Sunni rulers."

Soltani talked about the importance of a détente between the rivals: "During the 1960s and 1970s the two countries were in a strategic alliance with considerable political, military and security interactions. The West, and the US in particular, used these two states to deter the influence of Soviet communism in the Middle East.

"The change following the Islamic Revolution in 1979 dealt a heavy blow to the interests and ambitions of the West and the US in the Middle East, and also took some allies, including Saudi Arabia, by surprise. Tehran-Riyadh relations then entered a new stage fraught with mistrust and hostility."