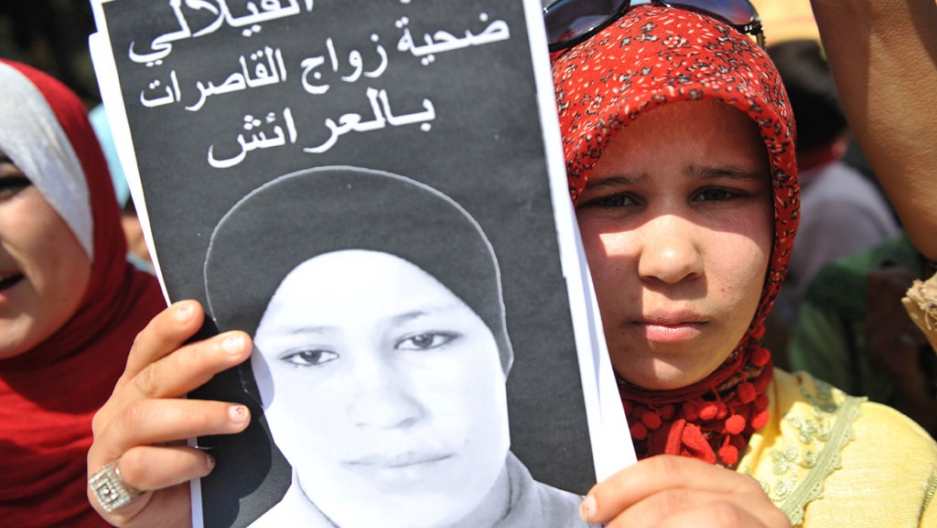 Hamida, the sister of Amina al-Filali who committed suicide after being raped, holds a poster of her sister during a protest in Larache, Morocco, on March 15, 2012.
Credit: ABDELHAK SENNA
Share

Morocco on Wednesday scrapped a highly controversial law allowing rapists of children to escape punishment if they marry their victims, as rights activists pressed the government to legislate to protect women from violence.

The amendment to Article 475 of the penal code, first proposed by the country's Islamist-led government a year ago, was adopted unanimously by lawmakers, parliamentary sources said.

The offending article made international headlines in March 2012 when Amina Filali, 16, killed herself after being forced to marry the man who had raped her, and who remained free.

Right activists hailed the amendment, while stressing that much more remained to be done to promote gender equality, outlaw child marriage and protect women from violence in the North African country.

"It's a very important step. But it's not enough. ... We are campaigning for a complete overhaul of the penal code for women," Fatima Maghnaoui, who heads a group supporting women victims of violence, told AFP.

Global advocacy group Avaaz said it had handed a petition signed by more than a million people to Morocco's parliament demanding the government adopt promised legislation to combat violence against women.

Amnesty International said Wednesday's amendment was a step in the right direction but "long overdue," and urged a comprehensive strategy to protect women and girls from violence in Morocco.

"It took 16-year-old Amina Filali's suicide and nearly two years for the parliament to close the loophole that allowed rapists to avoid accountability. It's time to have laws that protect survivors of sexual abuse," the rights group's deputy regional director Hassiba Hadj Sahraoui said.

As in numerous other Arab countries, sexual harassment of women is commonplace in Morocco, despite the adoption of a new constitution in 2011 that enshrines gender equality and urges the state to promote it.

An official study published last month said nearly nine percent of Moroccan women have been physically subjected to sexual violence at least once.

More than 50 percent of violence against women is thought to take place within marriage, and marital rape is not recognized as a crime.

A bill proposed by the Islamist-led government, threatening prison sentences of up to 25 years for perpetrators of violence against women, is still in the drafting stage.