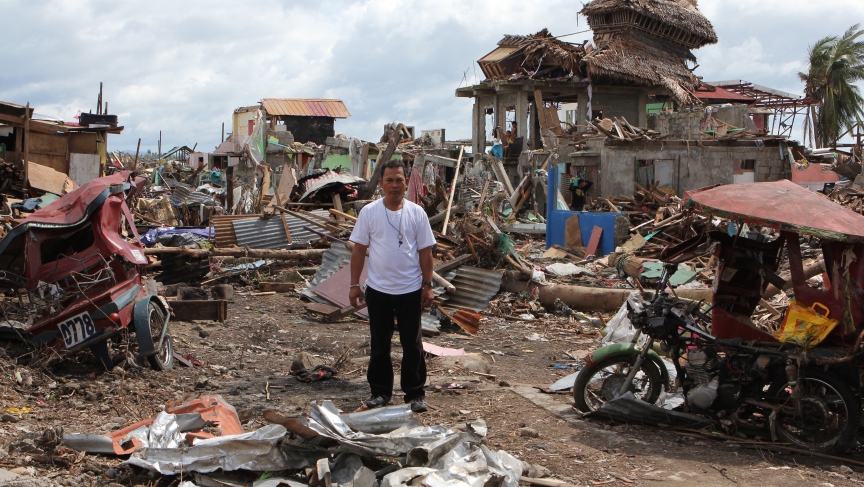 Rene Celis stands in the ruins of Barangay Pampango, a seaside neighborhood in Tacloban that was destroyed by Typhoon Haiyan. Celis was the neighborhood leader — or “captain.”

Before Typhoon Haiyan struck the Philippines in November 2013, Rene Celis lived in a neighborhood called Pampango. It sat right up against the bay in downtown Tacloban.

"Our neighborhood was so beautiful,” he said. “Even though it was a squatter area, the place was beautiful."

Most of the houses were tiny cinderblock homes. Along the waterfront, coconut palms swayed in the breeze.

Celis, 53, was the leader — or "captain" — of the neighborhood. When he was elected, he cracked down on crime. He built a plaza by the bay. Couples and old men would walk along the seawall and watch planes land at the airport across the water.

When the typhoon hit, it destroyed every home in Pampango. Celis and his wife tried to ride out the storm on a rooftop, but she was swept away.

“I guess she couldn't hold on anymore, the wind was so strong,” he recalled. “Suddenly she was just gone."

Celis’s wife died, and so did 23 of his neighbors. Even now, corpses turn up in the rubble.

It is painfully clear to Celis that if another big typhoon and storm surge came through Tacloban, people would not be safe in Pampango. City officials agree.

"The government's order is that any house that sits within 40 meters from the seashore has to relocate, including my house and a lot of other houses,” Celis explained.

To make things easier for those displaced, the government says it will provide free housing at a safe location, well inland.

"Right now we are allocating 70 hectares of government land in Tacloban North,” said Maria Lagman, who is in charge of housing development for the city of Tacloban. “We are really building it as a new town."

The plan is to relocate as many as 50,000 squatters who were displaced from their seaside homes.

Rene Celis said many of his neighbors from Pampango are tempted by the idea of a free house. Right now, they are living in rickety shacks with plastic tarps for roofs.

But Celis said where the government wants to move them — 10 miles inland — is too far away. In fact, he said he has never been out to where the new homes will go.

Celis and I drove out to the relocation area. It sits at the edge of the city, past the temporary burial site for the unidentified dead, beyond the municipal dump.

There is not much out there besides cicadas and birds.

"This place is really far from the city,” said Celis, looking around at the vegetation.

He noticed a roadside vegetable stand and approached a woman there. He asked her what it cost to commute to the city. Then he did some quick math.

"Just our transportation costs will use up our salary,” he said. “How would we pay for food for our family?"

Celis’s neighbors in Pampango are fishermen, traders and store clerks. They have jobs that depend on the city or the sea. He said commuting from the relocation area is unrealistic.

Celis said he understands that the government is trying to keep his people safe, but he hopes that officials will come up with a better relocation site.

Otherwise, new squatter settlements will spring up in vulnerable areas all over again, he said — because while people may risk their lives by the water, at least there they have a livelihood.