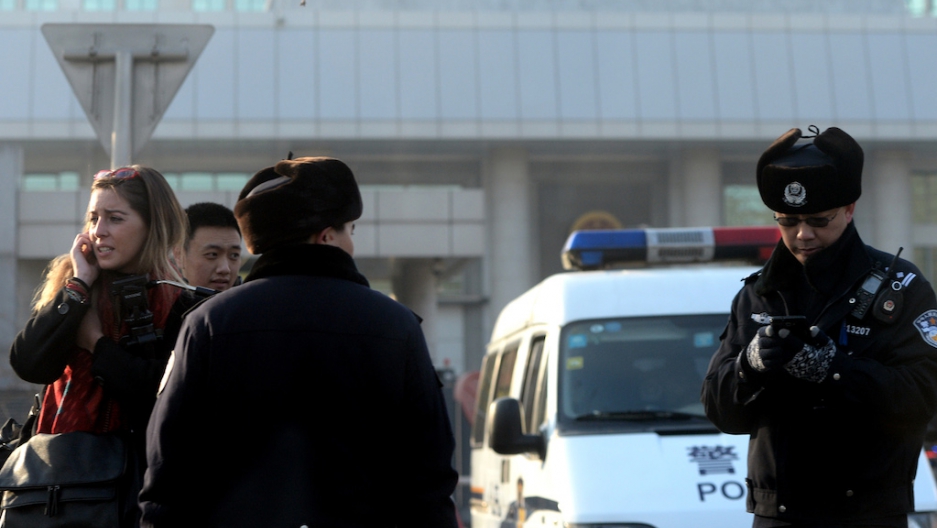 Chinese police stop a foreign journalist outside the trial of Xu Zhiyong on January 22, 2014, under strict security. Xu, one of China's most prominent anti-corruption activists, called for the government to publish the assets of officials. Today, the International Consortium of Investigative Journalists revealed extraordinary overseas wealth of Chinese elites.
Credit: Goh Chai Hin
Share

After all, Chairman Xi Jinping has made stamping out corruption one of his administration’s signature priorities. He has banned lavish banquets, curbed gift-giving, and launched investigations into what he calls “tigers” (corrupt big bosses) and “flies” (smaller venal officials.)

The report, published by the International Consortium of Investigative Journalists (ICIJ), is based on a leaked cache of files that detail nearly 22,000 offshore investment vehicles held by clients from Hong Kong and China.

These people include close relatives of Communist Party elites, including the son of ex-premier Wen Jiabao and the brother-in-law of Chairman Xi Jinping.

Within hours of the report’s publication, by the consortium and several media partners including The Guardian, Beijing’s cyber cops had been mobilized. The websites of both The Guardian and ICIJ in China were blocked. Links to the report on Sina Weibo, China’s equivalent of Twitter, were censored. And scattered Sina Weibo messages that shared screenshots of the report, visible Wednesday morning, had been expunged.

One user said he was “hurrying to grab the data” in the story before it was blocked.

Though the censors may have won this round, the saga is not yet over. On January 23, ICIJ has said that it will release 37,000 names contained in its Offshore Leaks Database.

Ironically, Wednesday also marked the beginning of the trial of Xu Zhiyong, a lawyer who advocated for transparency. In April 2012, Xu wrote a letter calling for officials to disclose their assets.

You’d think that idea should have meshed nicely with Xi Jinping’s anti-corruption rhetoric. Instead, Xu was arrested last July for “gathering a crowd to disturb order” and “making a racket.” These shamelessly vague charges have become the Chinese government’s standard tool to justify locking up troublemakers.

Foreign journalists trying to cover Xu’s trial Wednesday were surrounded by plainclothes guards and manhandled off the scene. You can see in footage from BBC, CNN, and Sky News how quickly the guards arrived and tried to block the cameras with their bodies and hands.

This is surprising behavior from a government that says it really wants transparency to flush out corruption.