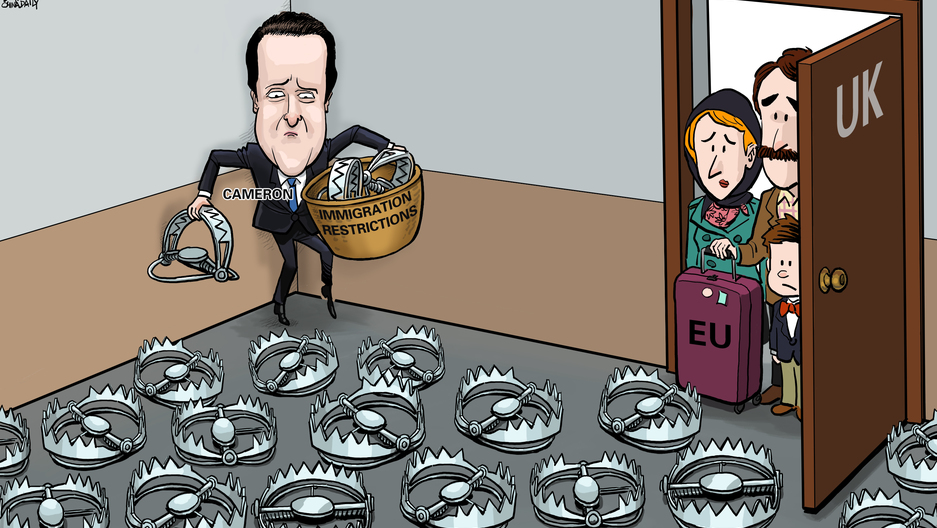 This is British Prime Minister David Cameron's idea of a welcome mat for immigrants from Bulgaria and Romania. Cameron has angered other European leaders by suggesting changes to the European Union treaty on the right to free movement.

Britain's Prime Minister David Cameron wants to roll back some of the free movement provisions of the European Union treaty before poorer countries, like Bulgaria and Romania, are allowed to join the EU. He's concerned about migrants shopping for the best benefits they can get, and hurting the UK economy.

The Germans argue they've benefited from foreigners coming to their country to work or study. They vow to block any changes that would restrict the right of free movement between member states. And Britain's Telegraph reports that may set up a stalemate. No countries can be added to the EU without unanimous approval — something Britian said it won't give without changes.

In October 2010, the world's media was gripped by the amazing rescue of 33 miners from Chile, trapped underground for more than two months after a tunnel collapsed. When they were winched to safety, the men were treated as national heroes and personally greeted by President Sebastián Piñera as they emerged from the ground.

The BBC reports that, more than three years later, the men are still struggling to come to terms with their experience, and have yet to receive any compensation for the accident.

Sometimes art has its place in reporting the news

Foreign correspondents used to travel with only a notebook and a pen. Then, they added computers, microphones and video cameras. Recently, BBC correspondent Andrew North started carrying a sketchbook.

For the past eighteen months, North has experimented with using a pen and waercolors to capture scenes he is covering. When he attended the Jaipur Literary festival in India, he tweeted some of his "news sketches." He told PRI's The World how his sketches have added to his reporting.

The French comedian Dieudonne M'Bala M'Bala faces thousands of euros in fines relating to various hate speech crimes, including a case stemming from his anti-Semitic comedy sketches. His controversial show "The Wall" was shut down on its opening night on the orders of France’s highest court because of his ties to anti-Semitism. French website expatica.com reports the comedian is now being questioned for allegedly assaulting a law enforcement officer who came to his home.

In court, Randell denied he was trafficking in obscene publications, a charge which carries a two-year prison sentence. His Ugandan housemate, Albert Cheptoyek, has also been charged with the same offense, and is scheduled to stand trial, as The Ugandan Monitor reports. Uganda's parliament recently passed a bill to increase restrictions on homosexuality, even making being "repeatedly" gay a crime punishable by life in prison. Uganda's president has indicated he won't sign the bill into law.

A Haitian artist fights to preserve the vodou religion

Since the slave revolt in 1791, the vodou religion has been a key part of Haitian national identity and heritage. Its followers have kept the religion alive, despite pressures from the Catholic Church. Now vodou is facing a new threat — from the growing popularity of the Evangelical movement.

Unofficial estimates suggest that almost half the Haitian population is now Protestant, due in part to American-funded missions, churches and schools. PRI's The World heard from Erol Josué, the official charged with convincing Haitians to value this part of their cultural history, even if they don't embrace the religion.

New Zealand is turned on again after Tropical Cyclone June lashed the area with strong winds that knocked down power lines on Tuesday. Thousands of people around Auckland were without power at the height of the storm, but all of them had their power restored by Wednesday morning, according to the International Business Times.