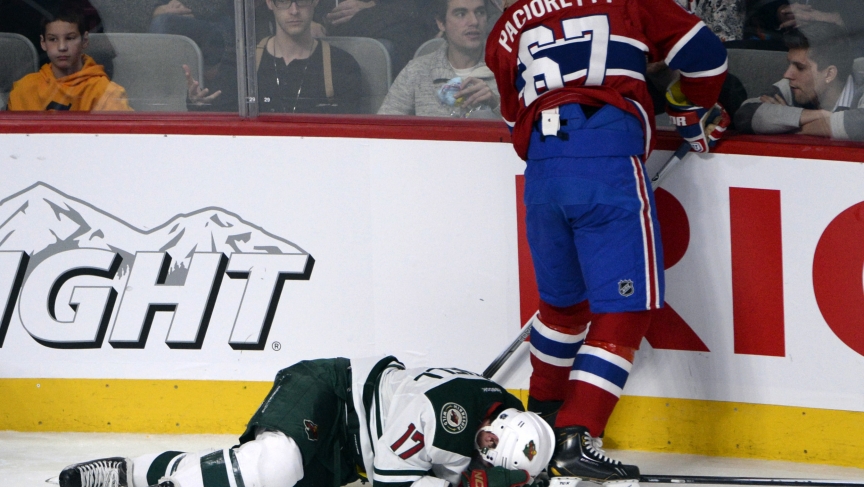 Minnesota Wild forward Torey Mitchell (17) lies on the ice after a hit from Montreal Canadiens forward Max Pacioretty (67) during the second period at the Bell Centre.

And the injuries sustained by players in the NHL cost the league nearly $218 million each season. That's according to a team of researchers at Toronto's St. Michael's Hospital. Their findings were published this week in Injury Prevention. Officials from the NHL didn't return messages seeking comment on the report.

The Canadian Brain Injury and Violence Research Team studied 1,307 high-level players who participated in at least one regular-season NHL game during the 2009-10, 2010-11 and 2011-12 seasons. They found that 825 of the players missed a game or more over that time period because of injury. The researchers applied the games lost per player to that player's salary and found that the total salary costs lost to injury over the three seasons was $653 million — or $218 million per season.

"I think it's a concern wherever hockey is played, and not only at the professional elite levels, but this boils down to children and youth," said lead report author and neurosurgeon Michael Cusimano. "Children and youth basically copy what they see going on in the NHL and this is a real concern because, in the NHL, in this three-year period, we had 323 concussions."

The cost of concussions alone was an astonishing $42.8 million a season.

Team insurance covers some of the losses. Policies generally cover 80 percent of lost salary if a player loses more than 30 games to a single injury. But the high cost of insurance and the very high cost of uninsured injury is absorbed by the various NHL teams — and then passed on to ticket buyers.

"This is what people would say is the cost of doing business, and so, like any other business, that cost gets transferred down to the consumer — which in this case would be the fans," Cusimano said. "They might notice it in the ticket prices, they might notice when they want to go buy a hotdog and drink for their kid at the arena."

But researchers found little or no effect in decreasing the number of concussions suffered by players.