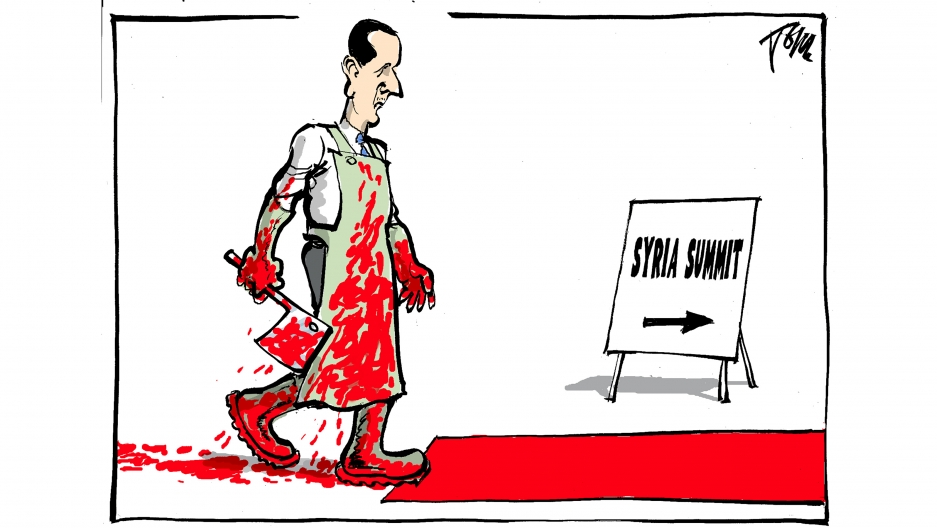 Dutch cartoonist Tom Janssen looks ahead to the long-awaited peace talks in Switzerland to deal with Syria's devastating civil war. Syrian opposition groups are citing new, photographic evidence of widespread torture and killing by Bashar al-Assad's government and demanding that he step down and face a war crimes trial.

The much anticipated Syrian peace talks are about to get under way just as new signs of torture emerge from the war-torn Middle Eastern nation.

A new report documents, with photos, reports of the systematic killing and torture of about 11,000 people, based on information provided by a defector and gathered by three former international prosecutors. According to Al Jazeera, the report reveals victims of "starvation, strangulation and beatings, and features pictures of emaciated corpses with livid wounds."

Desmond de Silva, the former chief prosecutor of the special court for Sierra Leone and one of the report's authors, called the report a smoking gun — proof of industrial-scale human rights abuses by the Syrian regime of Bashar al-Assad. Syria denies using torture in the ongoing civil war.

For some in Britain, former Prime Minister Tony Blair is a controversial figure because of his decision to send UK troops to Iraq in 2003. Since he stepped down in 2007, a dogged group of peace protestors have demonstrated against him at every public engagement — and several intrepid people have tried to arrest him for war crimes.

Last week, his family dinner was interrupted at a restaurant in London when one of the staff, bartender Twiggy Garcia, decided to try his luck and asked Blair to accompany him to the nearest police station. But, as the Independent reports, the former prime minister kept him talking until his security team arrived — leaving Garcia with no choice but to exit the building, and his job, in a hurry.

When two toilets really aren't better than one

A photograph tweeted by the BBC's Moscow correspondent has gone viral, creating a public relations embarrassment for the Russian Government. Steve Rosenberg shared a picture of the men's restroom at an Olympic venue in Sochi — containing two toilets side by side, sharing a roll of toilet paper.

Members of the political opposition have questioned the cost of hosting the Winter Games — Russia has reportedly spent $50 billion — and retweeted the photo, presumably as a sign of how little Russia has gotten for its money. Other Russian social media users simply made fun of the photograph, suggesting it might contravene a controversial Russia law banning "homosexual propaganda." The BBC has the full story.

Radioactive fish from Fukushima? Not here

The radiation that was released from the Fukushima nuclear plant in Japan has many on the US west coast worried about the possible health risks they might face from the Pacific Ocean fish they eat. Popular YouTube videos show people with geiger counters getting readings from the sand on some beaches.

PRI's The World reports that researchers have found tiny amounts of radioactive elements linked to Fukushima in some fish, but that the levels are hundreds or thousands of times lower than safety standards. A University of Washington oceanography says you would have to eat 2.5 tons of tuna in a year to get a harmful dose. And the beach sand? The radiation seems to be naturally occurring and not linked to Fukushima.

The White House has announced that President Barack Obama will meet with Pope Francis at the Vatican on March 27, during a planned European trip. And they'll probably discuss poverty.

CNN.com reports that Obama quoted Pope Francis in a speech last month, saying the Pontiff had asked why "it is not a news item when an elderly homeless person dies of exposure, but it is news when the stock market loses two points?" A spokesman said the president was looking forward to discussing their shared commitment to helping the poor.

India will soon sell a handgun with women in mind

Some women in India have started earning self-defense since a brutal gang rape made international news a little more than a year ago. Now, a state-run company is offering another form of protection.

PRI's The World reports on a new gun that will soon hit the Indian market designed to be light, fashionable and fit in a purse. It is named Nirbheek, or Fearless, in honor of the woman who was killed in the gang rape. Yet many Indian women are unenthusiastic about carrying a gun. And there's another reason it is unlikely to become a bestseller. The price is about $2000.

Around much of the US, people are gearing up for Polar Vortex II. On the east coast, that means a whole lot of snow and cold. But they can take heart, at least they are not in Verkhoyansk, Russia, where the temperature on Monday was a frigid -66 degrees Fahrenheit. Or, at the other extreme, you could be in Birdsville, Australia, which topped out at 115 degrees. As AccuWeather pointed out, that's a 181-degree temperature difference across the planet. That should put whatever weather you are living through in perspective.