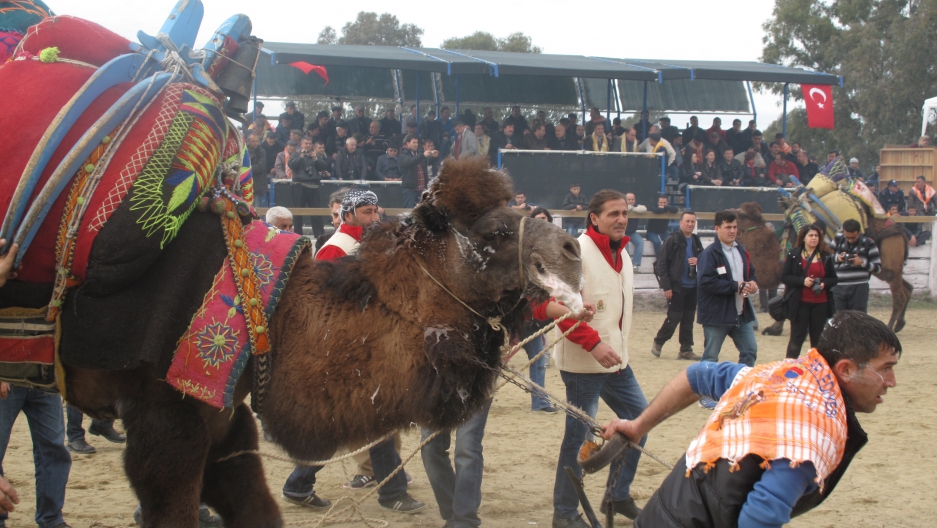 Referees pull camels out of the ring before the animals are able to inflict real harm on each other. The bouts have been criticized by animal welfare groups though organizers insist it's humane.
Credit: Jacob Resneck
Share

SELCUK, Turkey — Their long necks intertwined, mouths frothing in a white lather and eyes bulging from the strain, two camels attempt to force one another to the ground.

Tens of thousands of liquor-fueled fans cheer them on.

"When tensions rise the camels get angry, they feel this anger and they want to fight," said 52-year-old Ahmet Sarsilmaz, who for 15 years has coached wrestling camels.

“There’s a lot of dudes here,” observed Robert Lloyd, a 32-year-old Briton who teaches English in Istanbul. He said he finds the atmosphere alone intoxicating. "Guys go out and get smashed and shout at camels," he said. "It's very easy to get carried along with the infectious excitement."

Selcuk's tournament, which took place on Sunday, isn't the only camel-wrestling tournament in Turkey — but it's certainly the largest. Now in its 32nd year, it's held here as a celebration of traditional Turkic nomads, who have a large presence in communities along the Aegean coast.

Once frowned upon as backward by pro-Westernization Turks, camel wrestling is now enjoying a resurgence with the support of the local municipality, which helps pay for the upkeep and transport of the camels. The contests are for prestige rather than cash.

Evren Seymen, a referee and organizer, says it's becoming a big draw for the town, which also boasts ruins of the ancient city of Ephesus just a few miles away.

"Twenty thousand people are coming here to Selcuk," he said. "It's a small town but a big festival."

It's true: the population of the town doubles during the Sunday event, which fills the municipal stadium, attracts local politicians and offers an annual meeting point for landowners to entertain friends and flaunt their wealth as crowds cheer for favored camels.

"I've seen lots of people, when their favorite camel was beaten they were crying," said Gokhan Sertcelik, an attorney who grew up in Selcuk. "I've seen many scenes like that."

It’s not just brawn; beauty is part of the contest. The day before the tournament, the comeliest of the more than 130 camels in the event are paraded through the town's small square, dressed in rich finery. It’s a beauty pageant for ungulates: Hours are spent combing their matted fur, cleaning their hooves, and adjusting the saddles and cloths that adorn the beasts.

The festival is timed to fall in January, during the traditional winter rutting season when male camels compete for a mate. Early Orientalist writers noted that during this season camels could go from being docile beasts of burden to 2,000-lb, testosterone-fueled monsters.

"The camels, in the season of love, are dangerous," Luis del Marmol Carvajal, a 16th century Spanish chronicler, observed during a voyage across North Africa. "This season continues 40 days, and, when past, they resume their ordinary mildness."

Nonetheless, most of the pageant camels stand obediently awaiting their turn. But if one steps out of line or snaps at an owner, he's soundly rapped on the hoof with a cane.

The caning is obviously painful, as the huge animals shudder at the sight of the proffered whacking stick. It’s a reminder that the event is stressful for the animals.

There's no organized opposition to the event, though in the past animal rights activists have complained that the contests are illegal and cruel.

"It is a clear crime to make animals wrestle, but animals are being wrestled under the guise of festivals," Ege Sakin of Turkey's Animal Rights Federation, known as HAYTAP, told the Today's Zaman newspaper last year. "Although it is a crime, municipalities acquire special permission for such events from the district governors' offices under the cover of festivals."

When quizzed about animal welfare, most locals defended the festival as completely humane.

"This is not camel fights, this is wrestling," said Ahmet Sogutcu, a 42-year-old merchant who was born and raised in Selcuk. "They try to prove their power — they don't hurt each other."

Organizers explained that they go to great lengths to avoid injuries. "We take a lot of precautions," said Cafer Coban, a festival volunteer. "There's a team of referees to pull them apart before one is injured. Also they wear muzzles so they can nip but they can't seriously bite."

The bouts aren't the only draw. The festival is an extremely social occasion where men, mostly, sit with their friends and extended families at long tables grilling meat and toasting each other with tall tumblers of raki, Turkey's anis-flavored national spirit.

The grilled camel sausage — spiced with garlic and usually mixed with beef to dampen the meat's natural tartness — is also a popular draw. Lloyd says he bought a kilogram (2.2 lbs.) of the meat as a souvenir.

"It tastes like [how] camels smell which is kind of off-putting but they spice it really well so it's good," Lloyd said. "I'm a fan."

The few women that did attend mostly kept to the sidelines. Nukhet Akgun, 39, grew up in the area and says that camel wrestling is part of her ancestors’ nomadic tradition. “We enjoy it very much but it's too crowded to bring these small children,” she said, her two young children by her side. "We are from nomadic people so since childhood it's been a part of our lives.”