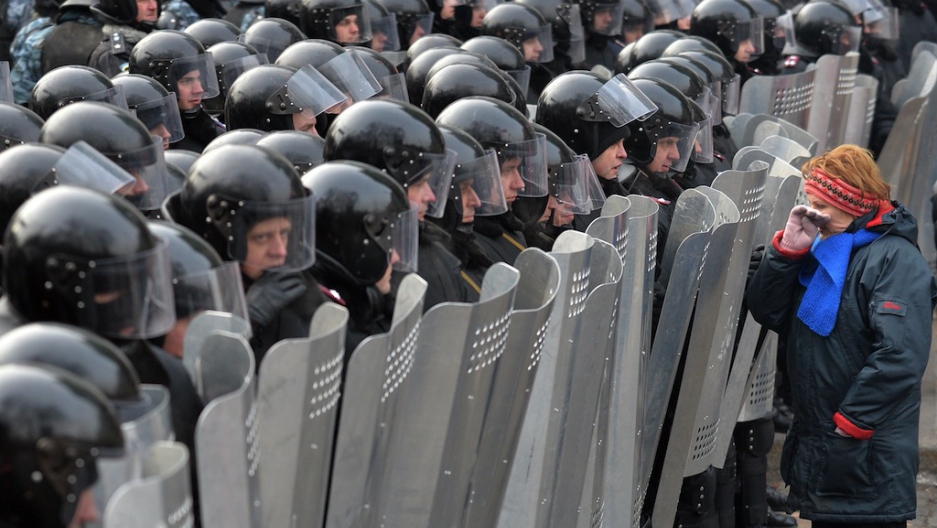 A protester speaks to riot police blocking access to the Ukrainian parliament in the capital Kiev on Jan. 21, 2014.
Credit: SERGEI SUPINSKY
Share

An uneasy calm returned to the streets of the Ukrainian capital of Kyiv on Tuesday after two days of violent clashes between pro-EU protesters and riot police. But on Wednesday morning, fighting resumed, with two activists shot dead in the first fatalities since the protests began two months ago.

More from GlobalPost: Standoff continues in Ukraine after unprecedented violence

Thousands of demonstrators continued to face down armor-clad security forces blocking access to the Verkhovna Rada parliament on Tuesday night.

Hundreds of people were injured during the unprecedented violence in the center of Kyiv, with demonstrators hurling Molotov cocktails and stones at security forces, who retaliated with stun grenades, rubber bullets and tear gas.

More from GlobalPost: Russia warns Ukraine 'out of control' after new violence

The clashes follow two months of protests over the government's decision to spurn a trade deal with the European Union and turn toward Russia instead.

Russia's Foreign Minister Sergei Lavrov warned that the situation in Ukraine was spiraling "out of control."

Widely condemned legislation banning nearly all forms of protest in the ex-Soviet country fuelled the latest violence as President Viktor Yanukovych scrambled to find a solution to the political crisis.

More from GlobalPost: Ukraine, EU deal complicated by Russia and dream of a Eurasian Union