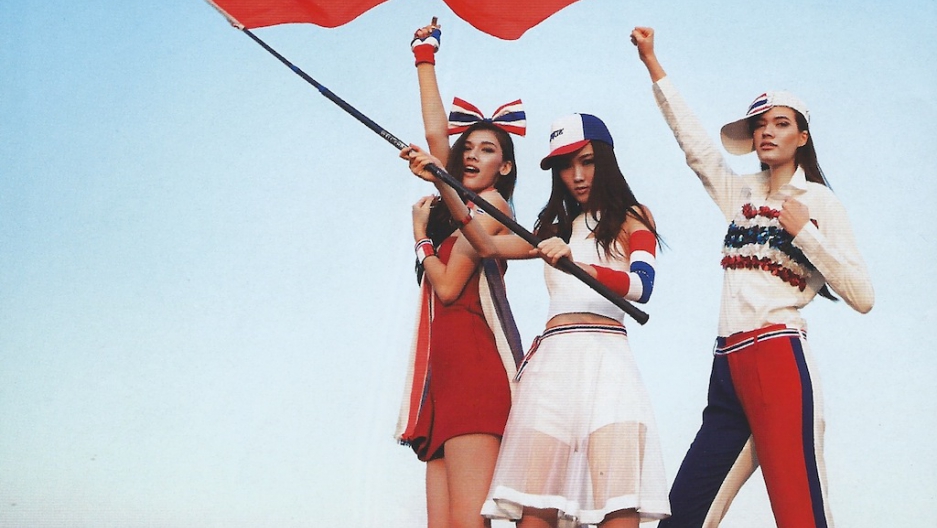 Models draped in protest garb pose for one of Thailand's leading fashion magazines, Image, which has depicted a crusade to topple the government as glamorous and sexy.
Credit: Image Magazine
Share

BANGKOK — It’s hardly the first putsch attempt in coup-riddled Thailand. But if the nation’s fashionistas have their way, the ongoing crusade to overthrow the government will go down as history's chicest coup.

To Americans, anti-government uprisings in faraway lands often conjure a fed-up lower class nobly risking life and limb to overcome an authoritarian regime. That imagery, however, is hard to square with some of the scenes playing out around the self-proclaimed “people’s coup” waged in Bangkok’s streets.

The latest issue of Image Magazine — Thailand’s answer to Vogue — gushes over protests as a “gathering spot for celebs and high society.” Like the “audience in premier seats at the cineplex ... they look like grand gents, smelling fragrant and clean.”

A spread in the magazine dolls up milk-skinned models in protester garb and Jimmy Choos and poses them with clenched fists. Their pouty lips are curled around whistles, a symbol of the uprising.

In another series of images, a lithe male model strikes a steely gaze, bloody scrapes across his high cheekbones. The faux wounds — painted on with makeup — insinuate scuffles with riot cops.

“The government says we’re traitors,” Kamron said. “Let them say it. What did you call the Americans who fought the British? Rebels? Or freedom fighters?”

This campaign to oust Thailand’s ruling party — called “Bangkok Shutdown” — has amassed 200,000 people at its height, according to the Associated Press, and deployed followers to blockade key intersections and invade government ministries.

The stated goal: driving Prime Minister Yingluck Shinawatra out of the country and replacing her elected party, Pheu Thai, with an unelected council of handpicked virtuous leaders. As explained in fiery stage speeches, the council would aim to purify Thailand of corruption before restarting elections.

“I would call it a soft coup. It doesn’t require the use of force or any firearms,” said Akanat Promphan, the University of Oxford-educated spokesman for the movement. “These are reasonable people. We are not violent people. We don’t want civil war.”

Yingluck Shinawatra, the country’s first-ever female premier, has instead challenged detractors to oust her via the ballot box in Feb. 2 elections. Her family is led by her older brother, the tycoon Thaksin Shinawatra, who was himself ousted in a 2006 army coup. The Shinawatras control one of the most resilient and successful political parties in Thai history — and also one of its most controversial.

The Shinawatra network has won every major election for more than a decade. According to their detractors, they intend to entrench power and suck the country dry. But this backlash movement is faring poorly in the international court of popular opinion. Most nations, including the United States, are pressuring Thailand to go forward with elections.

Supporters of the current government, who are plentiful in Thailand’s vast and populous northern rice country, contend that this uprising amounts to the complaints of bitter, urban elitists who refuse to loosen their historical grip on power.

The movement, however, appears to alternately celebrate and reject its bourgeois reputation.

The icon for “Bangkok Shutdown,” splashed across banners and T-shirts, is the same symbol seen on power buttons for Apple MacBooks — a luxury item few Thais can afford. Far from downtrodden and voiceless, the uprising has its own in-house satellite TV station: BlueSky Channel.

Supporters with cash to spare can buy golden protest whistles, which are advertised on BlueSky. Vendors at blockades tempt protesters with bubblegum- or tiramisu-flavored ice cream out of food trucks.

Dti, a brace-faced 24-year-old from Bangkok, said her Facebook feed had grown overwhelmed with friends’ protest selfies. So she tied ribbons around her Shih Tzu named “Sushi,” placed the puppy in her bike’s front basket and rode to the protest to snap a few selfies of her own.

“There’s this special feeling of coming together with people who all share the same ideology,” she said. “It’s fun.”

Those who back the movement are indeed better off than the typical Thai. A recent survey by The Asia Foundation revealed that more than half of the protesters hold white-collar jobs, 85 percent hold diplomas beyond high school and a third make more than $23,000 per year — roughly seven times Thailand's minimum wage.

The movement’s chieftain, a 65-year-old, thickset veteran politician named Suthep Thaugsuban, has racked up cash donations by the sack-load during all-day marches through downtown Bangkok. Reluctant to stir chaos, police cleared to arrest Suthep have so far tolerated his public appearances, in which supporters line the streets to hand over money.

Among them: Rujipa Vejjapinan, a stylishly dressed 30-year-old office worker, who gleefully cozied up to the protest honcho, handed over a fistful of cash and snapped the obligatory selfie. She then erupted into a squealing fit worthy of a Justin Bieber sighting. On that day, Jan. 15, the movement claims to have collected more than $220,000 in cash.

“The rural people, many of them are field workers. They don’t understand what’s happening to our country,” Rujipa said. “This clan running the country just makes them feel important by giving them money. ... They’re exploited like just another tool.”

Rujipa is particularly disdainful of rival pro-government protesters, called Red Shirts, who have advanced the idea that Thailand is locked in a feudal struggle between “prai,” the serfdom, and “aamat,” or aristocrats. “These ideas,” she said, “have been planted in their heads.”

Asia-focused Cornell University academic Benedict Anderson has rebuked the “Bangkok bourgeoisie” as “interested only in good food, fashions from abroad, expensive resorts and shopping trips in East Asia and Europe.”

Those within the movement are sensitive to allegations of elitism, which Akanat attributes to a “marketing scheme” by the Shinawatra political network. “It wouldn’t be fair to say this [movement] is hi-so,” said Akanat, using Thai slang for “high society.”

“A lot of working-class people have also shown clear support,” he said. In addition to middle- and upper-class Thais, frequent trips to protest blockades by GlobalPost turned up a mix of sun-leathered Thais from the tropical south, which has sent a large volume of protesters to sleep in flimsy tents at Bangkok blockades. More than 30 interviews with protesters also revealed the occasional workaday street merchant.

Still, some of the uprising’s most revolutionary rhetoric comes from protest leaders with highly patrician backgrounds.

“The spirit of the great masses incites us to fight on,” said Chitpas Kridakorn Na Ayutthaya, 27, a breakout star of the protest movement. “This people’s coup is no easy affair. We have only nation-loving hearts that must fight against the bandits plundering our country.”

Such rhetoric, posted to Instagram, would not sound terribly out of place during the French Revolution. But Chitpas makes for an atypical revolutionary. She is the heiress to a massive family fortune generated by Singha Beer, among Thailand’s best-known brews. Each evening, the political starlet signs stuffed dolls created in her likeness for throngs of eager protesters.

Kamron — the royally blooded grandson of three-times Thai prime minister, Seni Pramoj — warns foreigners against sneering at any elites who back the ongoing uprising. American independence, he said, was not engineered by peasants but by “the people who traded tea and tobacco. Your revolution had to bring out the elites.”

If Thailand descends into civil war, Kamron said, he will not flee to his second home in England. His uprising-themed magazine issue also contains an op-ed disdainful of those still wringing their hands: “When you won’t choose a side, you become a damned fickle, a double heart, a half child.”

“Your [American] civil war, you lost a lot of lives. You paid the price for democracy,” Kamron told GlobalPost. “Don’t we have time to learn? Adapt? Learn what’s right and wrong? Don’t judge us yet ... give us time to grow. We’re still children.”