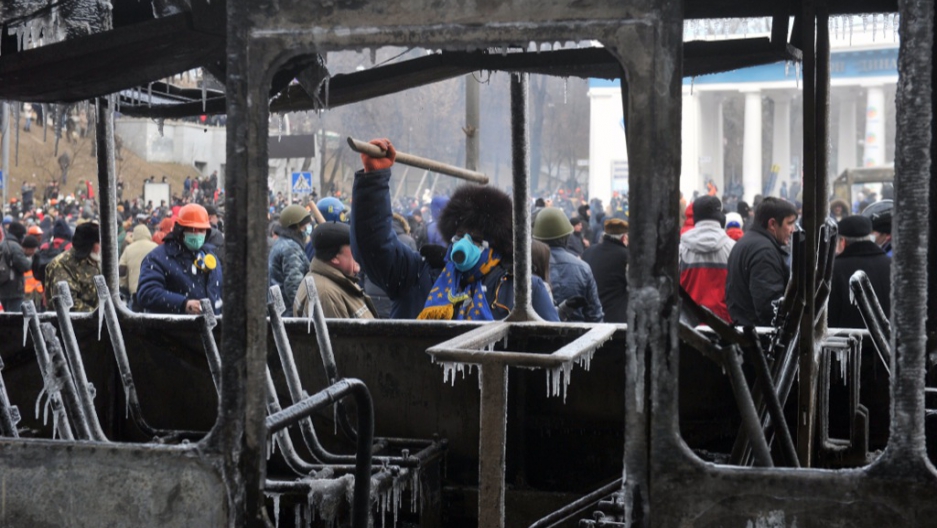 Protesters stand behind a burned bus during clashes with police in central Kyiv on Jan. 20, 2014. EU foreign ministers deplored the violence, saying the government was at fault for passing a package of repressive laws in an effort to tame pro-EU demonstrations.
Credit: Genya Savilov
Share

MOSCOW, Russia — Clashes in Ukraine between police and protesters entered their second day on Monday amid cursory efforts by the authorities to seek a solution to a political crisis that has brought unprecedented violence to the streets of Kyiv.

But a resolution seemed distant as critics panned President Viktor Yanukovych’s pledge for a roundtable discussion, chaired by a man they say was responsible for ordering a violent assault on the protests after they first began late last year.

Andriy Kliuyev, head of the country’s National Security Council, was appointed to head a cross-party discussion aimed at calming tensions after the weeks-long anti-government movement erupted into violent clashes over the weekend, leaving scores of protesters and police injured.

But opposition leaders demanded to meet Yanukovych himself, and it remained uncertain by Monday evening whether the meeting would even take place.

“It makes sense only to hold negotiations with those who make decisions and carry responsibility for their implementation,” boxing champion and opposition leader Vitali Klitschko said Monday, local media reported.

Instead, Klitschko — who has emerged as the movement’s most visible leader — appealed to Ukrainians in a video address on Monday to flood Independence Square, the nerve center of the demonstrations that broke out last November in response to the government’s refusal to sign key agreements with the European Union.

“You are needed here so that Ukraine wins — not Yanukovych,” he said.

His call came a day after a rally in defiance of a sweeping anti-protest law passed last week descended into chaos, marked by tear gas, sound grenades and Molotov cocktails.

The violence was the most serious of the two-month-long protest movement and reportedly resulted in more than 200 injuries. Many of the injured were police officers.

Ukraine’s Interior Ministry said in a statement it has arrested at least 20 people for their alleged roles in “mass riots” on Sunday.

The Kyiv-based Institute of Mass Information, a media watchdog, says at least 26 journalists were injured during the fighting. Other observers reported that riot police were targeting journalists, including with rubber bullets.

On Monday, police and protesters largely refrained from open physical confrontation but instead exchanged a volley of rocks and Molotov cocktails, observers reported. Kyiv Post editor and Wall Street Journal contributor Katya Gorchinskaya was among them:

By Monday evening, protesters were setting up barricades and other street defenses in apparent preparation for further clashes.

“All acts of violence must be duly investigated and those responsible brought to justice,” the EU Council of Ministers said Monday in a resolution, the Kyiv Post reported.

Protesters, angry with the government for turning its back on European integration and cracking down on mostly peaceful protests, have demanded the ouster of both Yanukovych and his cabinet since late November.

The leaders of Ukraine’s three main opposition parties have struggled to harness the mass discontent and have so far failed to take a clear lead in the grassroots protest movement.

Meanwhile, top Western officials have issued strong condemnations against the Ukrainian authorities and floated the possibility of sanctions against the Yanukovych administration. But some Ukrainians have bemoaned what they say has been the lack of clear Western support for the demonstrations.