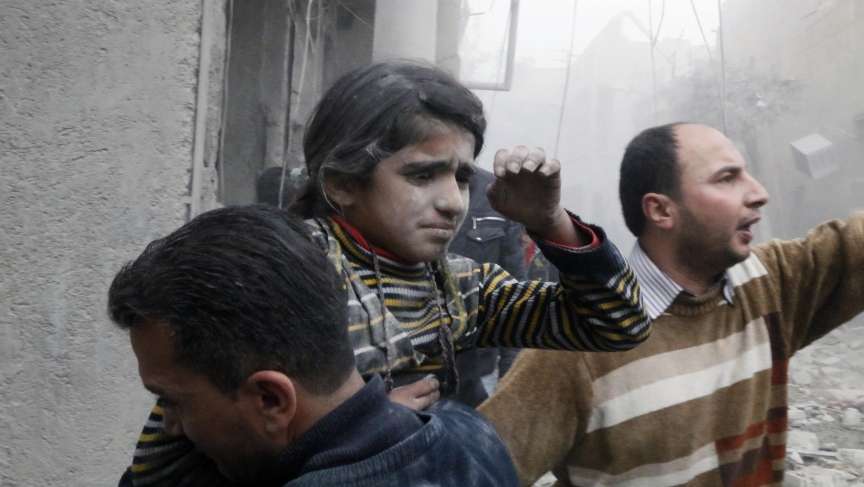 A Syrian girl is rescued from a damaged building after both of her parents died in what activists said was a government air strike.

No one ever suggested the route to peace talks in Syria would be smooth sailing.

But UN General Secretary Ban Ki-moon's last minute invitation for Iran to attend the discussions in Switzerland on Wednesday threatened to torpedo the talks.

Now the talks are back on -- without Iran.

Baker says it was very difficult to get the Syrian opposition to agree to come to the talks even before an invitation was offered to Iran.

"It almost fell apart on Friday," Baker says.  She notes that the Syrian opposition "finally did vote on Saturday with more than half of the organization abstaining or boycotting.  So it barely squeaked by and many are not convinced there's even a point in going to the talks at all and it might undermine their status in the fight.  So, they could be very happy to pull the plug."

Baker argues that the immediate goal of talks should be humanitarian access, ceasefires and actions that lessen the civilian toll.

The spat over the Syrian peace talks came on the same day as the US acknowledged Iranian progress in scaling back its nuclear program. He's not surprised US-Iranian relations are still rocky.

"You'll see in public arguments on both sides," says Ambassador Nicholas Burns. Burns was Under Secretary of State for Political Affairs under President Bush and is now professor of the practice of diplomacy and International Politics at Harvard's Kennedy School. He's not surprised US-Iranian relations are still rocky. "That is normal in diplomacy, and certainly it's better than fighting. But I think we'll see a lot of this in these discusssions."

He added, "I think it's inevitable that you're going to see these growing pains and disputes and arguments over how we talk to each other, because it's been 34 years since Iran and the United States have had a normal relationship with each other, where the two governments talk and argue about problems."

As to the future, Burns says "it's probably too strong to say 'optimism' when it comes to Iran. We've been separated for so long. The Iranians have not been truthful in the past ...  and so I think you can't trust the Iranians, not given their track record. We have to verify at every stage in this process."