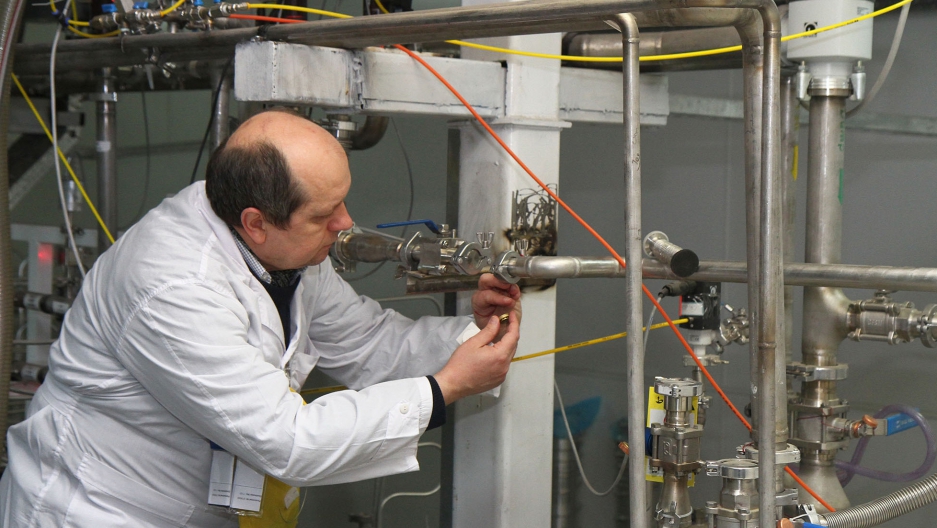 An unidentified International Atomic Energy Agency (IAEA) inspector disconnects the connections between the twin cascades for 20 percent uranium production at nuclear power plant of Natanz, as Iran halted production of 20 percent enriched uranium according to the terms of an interim deal with world powers on its disputed nuclear program.
Credit: Kazem Ghane
Share

JERUSALEM — Israel and Saudi Arabia aren’t used to finding themselves on the same side of an argument. But the interim deal curtailing Iranian nuclear development, beginning its implementation today, seems to have achieved the impossible.

The agreement, signed last November, in which Iran's nuclear development is to be decelerated in exchange for an easing of sanctions that have paralyzed its economy, signaled the first ray of light in a relationship between the West and Iran that went dark 34 years ago.

But as both the United States and Europe praise this new step toward a broader dialogue, not everyone’s thrilled about giving Iran extra breathing room. Arch-enemies Israel and Saudi Arabia have emerged as a key pair opposing the deal.

“Our relationship with Saudi Arabia is good, and we hope for more peaceful relations between Israel and Saudi Arabia,” said Israeli Prime Minister Benjamin Netanyahu in December — a surprisingly strong statement given that the two countries do not have diplomatic ties. Such a public statement would have been unthinkable even weeks before.

Improved relations may not be just wishful thinking expressed by the prime minister.

Israel's energy minister, Silvan Shalom, led a delegation to the International Renewable Energy Agency's annual conference that opened Sunday in Abu Dhabi — a member of the Gulf Cooperation Council and one of Saudi Arabia's closest allies — in the first such visit since the suspected Israeli assassination of a Hamas commander in Dubai in 2010.

Some reports have even suggested that Israel and Saudi Arabia, the most powerful of the Gulf states, may be secretly coordinating their reactions to Iran.

Last month, the Palestinian magazine al-Manar reported that a delegation from an unnamed Gulf monarchy, assumed to be Saudi Arabia, visited Israel to discuss Iran with high-level Israeli officials, possibly even including Netanyahu.

It’s enough to make one wonder: Were previous relations between Saudi Arabia and Israel actually as bad as news reports (and both countries’ leaders) had led the world to believe?

In the area of commercial ties, at least, ambiguity is the name of the game.

"The less we talk about this, frankly, the better," mutters Shraga Brosh, an Israeli businessman and the former president of the Manufacturers Association of Israel, who nine years ago found himself invited to Dubai, a Saudi Arabian ally and a nation in which Israelis are banned, to talk business. He shrugs.

"We are more liberal that many elements there, so the fact that we work with Gulf monarchies, if it is publicized, could bring the cooperation to a halt, and that would be a shame. You understand that in principal, we are enemy states… But it's not as if their rulers don't know about this! Nothing happens there without their knowing."

So it is in the murky world of ties between nations that do not formally recognize the existence of one another — but which may share significant commercial or political interests.

One surprising yet evident fact is that the Arab League's boycott on trade with Israel, in place since the state's founding in 1948, has no bearing on the actions of Israeli businesspeople. Israel itself has no explicit prohibition on commerce with Saudi Arabia. This fact becomes apparent when an Israeli businessman interviewed by GlobalPost — who prefers not to openly address the subject — quietly opens a desk drawer and pulls out a document signed and sealed by Israel's Ministry of Industry, Trade and Labor authorizing the importation of Saudi polypropylene.

Black on white, it says "Country of Origin: Saudi Arabia." (The material is transported through Jordan.)

Do you crave some Vimto, an old-fashioned British cordial? You can pick a bottle up in Jerusalem, with a label that reads "Produced in Dammam, Kingdom of Saudi Arabia."

In fact, Israel's Foreign Ministry maintains a desk — and a Twitter account — in charge of interests in the Gulf states. But it is not immediately clear what the desk does; GlobalPost's request to interview the officials behind the Twitter account was not answered.

Brosh declines to speculate about the possible scale of Israeli exports to Saudi Arabia or to Gulf monarchies in general. Most goods headed to the Persian Gulf are marked as exports to Greece, Jordan or Cyprus — countries that act as way-stations. But, he says, "This is nothing new. It's been going on at the same level for years."

Brosh says that Israeli and Saudi businesspeople meet at international fairs and conferences, "like diplomats quietly lunching in Brussels or in New York." The Saudis, he says, can be "divided into two groups: those who say 'let's figure out a way to make this deal now' and those who say 'here is my card; call me the day peace is signed with Palestine.'"

That, he says, remains "the only real obstacle."

But, he adds, he knows "there are Israelis in Doha," another Saudi ally, and another state that bans entry to Israelis. "Sometimes you can hear Hebrew spoken in the malls. They're all dual nationals who travel on non-Israeli passports, but from what I understand there is a lot of business to be done."

There are other indications that the Arab boycott may be fraying at the edges, or have become impossible to enforce. In Jerusalem, it is easy to buy Damascene sweets even as the Syrian civil war rages. Recently, the Lebanese government was forced to deny the presence of "harmful" Israeli tomatoes in its markets.

The strange state of affairs occasionally veers towards parody. In April 2009, Iran spun into an uproar due to the alleged presence of Israeli pomelos in the Islamic Republic. How had they gotten there? Well, in fact, they had not. In the hope of increasing their income, wily but politically obtuse Chinese forgers, aware of the "Jaffa Sweetie's" premium reputation, slapped false stickers claiming Israeli origins on a shipment of citrus fruit.

"It’s really sexy to talk about secret ties between Israel and Saudi Arabia, and even Bahrain and Qatar these days," Nisman cautions. "But there are common interests. For example, Bahrain put Hezbollah on its terror list before the EU did. … On that front, you have to assume the enemy of your enemy is your friend. There is an increase in security cooperation and information sharing."

Ephraim Halevy, a former head of the Mossad, also does not dismiss strategic interests that may finally bring Saudi Arabia and Israel together. Saudi Arabia's long-held policy seeking to "preserve security inside the Kingdom, and stability in the region" is one entirely shared with Israel — even, he estimates, if that regional stability entails recognition of a Jewish state in the Middle East.