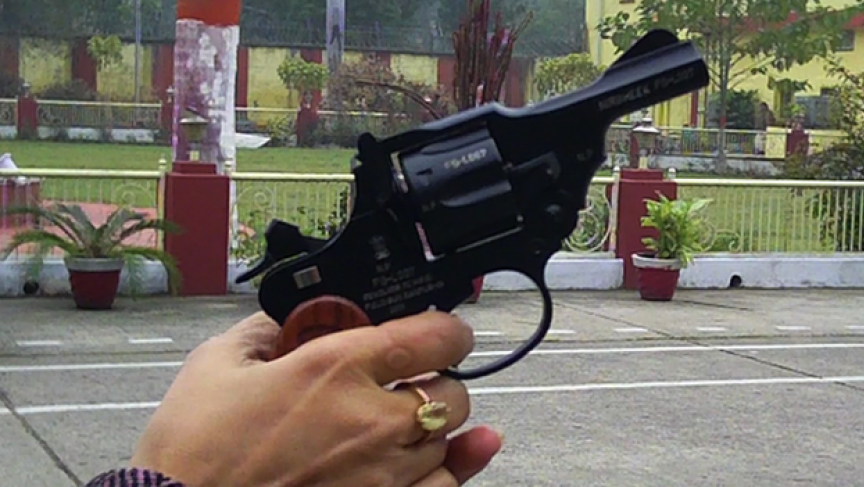 The NIrbheek, India's "first gun for women," will be released soon.

Very soon, Indian women will have a new tool for self defense: a gun designed just for them.

It’s a .32 caliber revolver called Nirbheek. The name is a synonym of Nirbhaya (meaning the fearless), the name given by the Indian media to the victim of the horrific gang rape in December 2012, which sparked widespread protests and demands to end violence against women.

Nirbheek was designed as a tribute to Nirbhaya. It’s the tiniest gun designed and manufactured by the state-run ordnance factory in Kanpur (see a video of what the gun looks like). It’s lighter than the average revolver and its designer says it will help Indian women protect themselves from sexual assaults. It will be released later this month or in early February, says Abdul Hameed, general manager of the factory.

“Until today, I have received about 20 orders for this revolver,” Hameed says, adding that not all are from women.

Undoubtedly, some women will buy it. In fact, more Indian women are buying guns to feel safer. But they are mostly educated, affluent women. And this gun won't exactly be widely accessible.

Consider the cost of Nirbheek: about $2000, which is too expensive for the vast majority of people here.

“I think women who can afford it are already too protected in their cars,” says 23-year-old Pratibha Singh of New Delhi, referring to the fact that most upper-middle-class women, especially in cities like New Delhi, don’t use public transport. They travel by chauffeur-driven cars.

Women do feel more confident and safe when they know they can defend themselves, she says, but she'd consider buying a knife, instead.

Her friend, 22-year-old Shambhavi Singh, agrees. “It’s very dangerous to carry a gun.” What if it went off unwittingly? “It’s like taking the law into your hands. I’d be very cautious about carrying a gun,” she adds.

Those two reflect the popular attitude toward guns here in India. Although gun ownership has been growing in recent years, it’s difficult to get a license to own a gun and most people are simply uncomfortable with the idea of carrying one.

Besides, as women’s rights groups have pointed out, guns can't be the solution to the rampant violence against women here. It’s about changing a culture of violence and changing how women are viewed in society. It’s also about sensitizing the police force to gender violence and ensuring they do their job to protect women. It's about ensuring victims get justice in courts. It’s a complex, deep-rooted problem that involves changing many aspects of a society and culture.

In the meantime, as Pratibha Singh points out, it's also important to ensure that women are empowered to defend themselves. And many people would agree. The number of women taking self-defense classes in New Delhi rose after the gang rape in 2012 and the widespread protests that followed.

Last fall, a short movie called The Day After Everyday was released on YouTube, quickly becoming an online sensation. It showed three young women being sexually harassed constantly by neighbors, coworkers and fellow passengers on their daily commute. Eventually, they signed up for self-defense lessons and were able to beat up a gang of men who attacked them. While the film was criticized for putting the burden of safety on women themselves, many feel women do need to be able to defend themselves.

"The issue of women’s self-defense should be more a part of public discourse," says Pratibha Singh. If men realize that that “a woman is capable of taking care of herself, of protecting herself, they’ll think twice before attacking her."