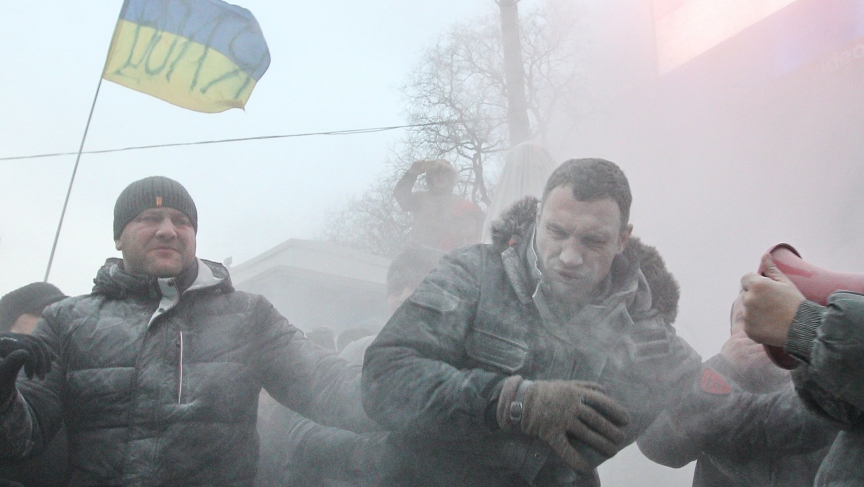 Opposition leader Vitaly Klitschko, center, reacts after he was sprayed with a powder fire extinguisher during a pro-European integration rally in Kiev on January 19, 2014. Protesters attacked riot police with sticks in Kiev on Sunday and tried to overturn a bus blocking their path to parliament.

For the past two months, Ukraine has been locked in a political standoff.

The government of President Viktor Yanukovych angered many Ukrainians by refusing to sign a new deal with the European Union.

Instead he chose to keep the country aligned with Russia — sparking weeks of anti-government protests.

Now, those protests have given way to violence. Serious clashes in the capital, Kiev, have left dozens of people injured. The violence flared after the government enacted a new law aimed at curbing political demonstrations.

The BBC’s David Stern says the country hasn’t seen anything like this before.

“These clashes have been going of for 24 hours,” he says. “They are quite intense. We have gasoline bombs people are throwing. It is definitely an escalation.”

The protesters in Kiev aren't just angry at President Yanukovych for refusing to sign a deal with the EU, or the draconian laws curbing the rights of citizens to protest publically.

They also accuse him of conducting a political vendetta against former Prime Minister Yulia Tymoshenko. She's was jailed by the government more than two years ago for an alleged abuse of power — and is still in detention. But her daughter, Eugenia has been appearing at the protests in Kiev.

She says she and other peaceful protesters were surprised by the violence. She thinks it’s unfortunate, but understands why it’s happening.

“They feel desperate,” she says. “And they have no other way to fight.”