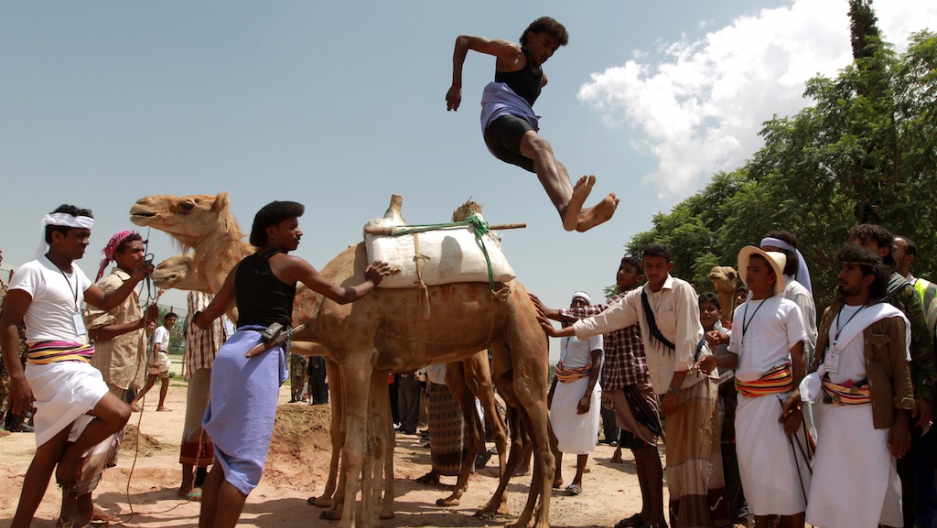 A Yemeni man leaps over a two camels during the opening ceremony of the Sanaa Summer Festival in the capital Sanaa on Aug. 18, 2013.
Credit: Mohammed Huwais
Share

It's only fitting that today, the day of the first Great Trojan Camel Wrestling Festival in Canakkale, Turkey, we take a look at the other camel-centric celebrations around the world. (And yes, camel wrestling is pretty much what it sounds like.)

There's India's International Camel fair at Bikaner in Rajasthan, where ornately dressed camels dance to their master's tune, bopping and hopping up and down with fancy footwork.

There's also the Sheikh Sultan Bin Zayed al-Nahyan Camel Festival, held at the Shweihan racecourse in the outskirts of Abu Dhabi. Camel racing is a popular sport in the Middle East. It's sort of like horse racing, but, you know, with camels.

In the Mazayin Dhafra Camel Festival, judges in December last year somehow told the difference between a beautiful camel and an ugly one.

And finally, there's Yemen's camel jumping competitions. Men in west coast Zaraniq tribe leap over a line of camels in a single bound. The man who jumps over the most camles is declared the winner.