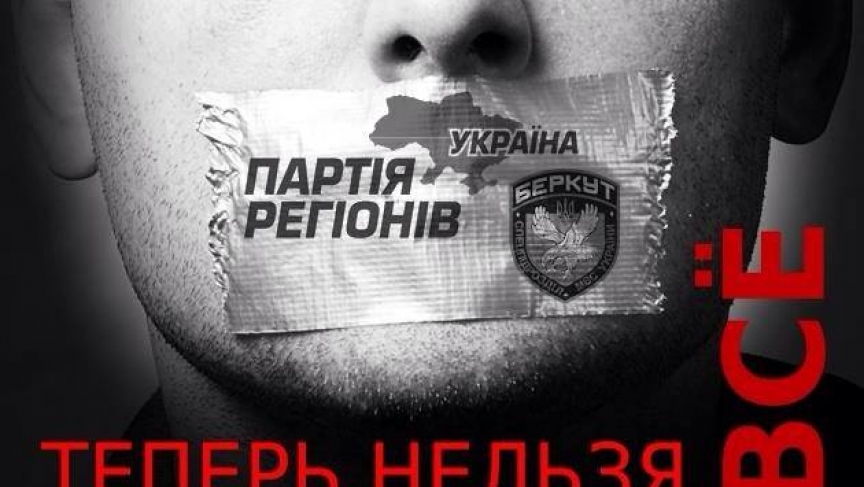 This anonymous image circulated online. The Russian inscription reads “Now EVERYTHING is prohibited.”

On the 57th day of Ukraine's massive pro-European, anti-government protests, the country's parliament passed a law that limits freedom of assembly, restricts the country's media and clamps down on freedom of expression.

Law No. 3879 [uk] introduces a variety of legal changes “for protecting the security of citizens.” Members passed the legislation during the parliament's first session of the new year on January 16, 2014.

The law comes as thousands of protesters continue to fill a central square in Kiev. The Euromaidan protests, as they have been dubbed, began as peaceful pro-EU rallies but turned into a large-scale, anti-government movement after police unleashed an aggressive crackdown against demonstrators — a handful of brutal beatings by police have been captured on film.

"A draft law 'passed” in full by the ruling majority in parliament on Jan. 16 criminalizes libel, labels and restricts civic associations receiving foreign grants as 'foreign agents' and imposes and substantially increases liability for any forms of protest. If the draft bill is signed by the parliamentary speaker Volodymyr Rybak and president, Viktor Yanukovych, it will set Ukraine’s democracy back by years.

Maksym Savanevsky of Watcher.com.ua noted that these and other measures, such as making it mandatory for citizens to show their passports to buy even a prepaid mobile SIM card, amount to a rise in censorship [uk] of journalists and Internet users’ expression, as well as increased control and surveillance over telecommunications systems and social media websites, under the guise of fighting extremism and violent uprisings:

"Today the Verkhovna Rada [Parliament] majority adopted a law which basically introduces censorship on the Internet."

Lawyer Dmytro Nazarets posted a few express analysis posts [ru] mentioning a new requirement that all Internet news sites and news agencies are now obligated to register with the authorities: "No more writing and posting news on your website without oversight and registration."

Journalist Mustafa Nayyem pointed out [ru] on Facebook the viciousness with which the law’s authors dealt with social media:

"Social media denounced by the explanatory note to the controversial draft law adopted by the Ukrainian parliament. The authors insist social media are used as a tool to spread these ideas and fuel hostility, where calls to violently change power and constitution are becoming more and more frequent."

Rachel Denber, the Deputy Director of the Europe and Central Asia division for Human Rights Watch, succinctly summed up numerous comparisons with Russia:

What #Russia did in 60 days after Putin's inaug, #Ukraine did in 20 minutes: "foreign agents" law, limits on demos, criminalz of libel, etc

The parliament also voted on the year's state budget on the same day. The budget has been highly controversial with the opposition criticizing [uk] it for multiple flaws, including a drastic increase in funding for law enforcement agencies at the expense of such items as healthcare. Opposition MPs had pledged to block parliament and prevent voting at all costs. At first, things seemed to progress according to their plan.

However, the opposition quickly lost control, with the pro-government majority voting in support of the budget and bypassing regular voting procedure.

And…#Ukraine‘s parliament passes 2014 budget. No discussions, debates. A quick & dirty vote, & that was that. Regions Party has the power.

A brawl during the parliament session followed, with the opposition physically trying to prevent their rivals from using the electronic voting system. However, the pro-presidential majority quickly retreated and continued voting by a raise of hands.

"While the whole country is watching, the seventh Ukrainian Verkhovna Rada [parliament] is ceasing to exist. What a f*cking shame… #Рада7"

Roman Shrayk, an independent journalist and author of the satirical Durdom Portal, called the parliamentary vote on the bills itself a sham, posting a video [ru] of the vote on his blog for Ukrainska Pravda: "20 minutes that destroyed the remnants of Ukrainian democracy."

Later in the day, President Viktor Yanukovych signed all five laws, including the openly anti-protest law no. 3879, sparking outrage in the Ukrainian online community.

"Now we are North Korea. And we have our own Vik Fed Yan [Viktor Fedorovych Yanukovych]"

Yet many other social media users have ridiculed the new measures, pointing out their absurdity.

The civic movement “Chesno” posted a photo, noting [ru] that it depicts something already “fobidden” by the new law: "In the meantime, here we are — foreign agents, office of the CHESNO movement, a group of more than five, wearing MASKS!"