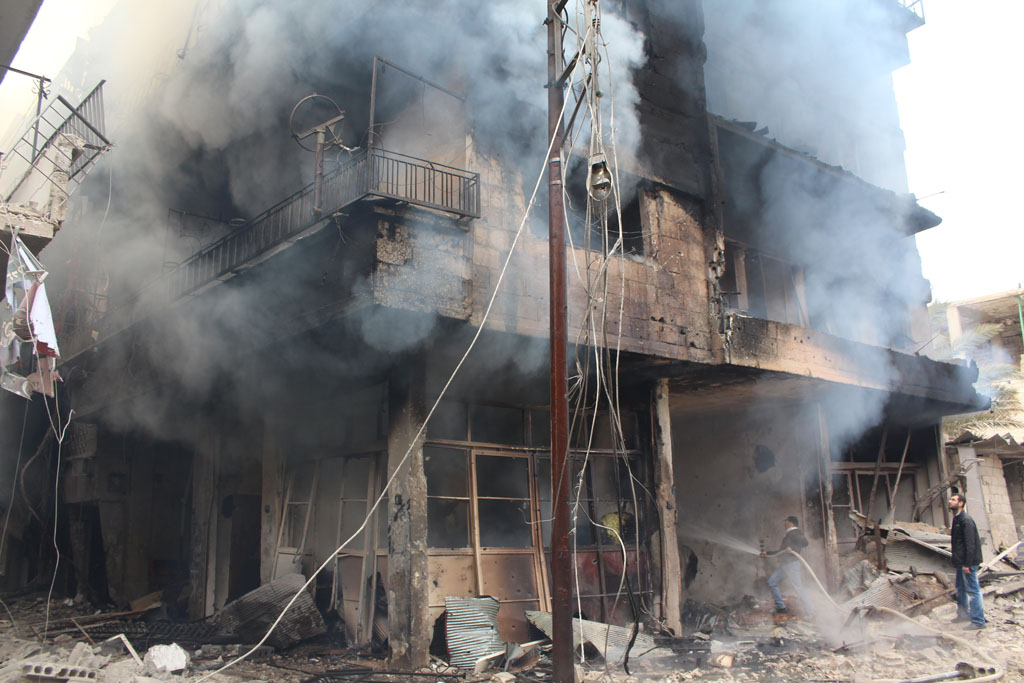 Men try to put out a fire in a building in the city of Daraya, southwest of the capital Damascus, as fighting between opposition forces and troops loyal to the government of Syrian President Bashar al-Assad continues, Jan. 12, 2014.
Credit: Hussam Ayash
Share

The Syrian government said it was ready to exchange prisoners with the rebels on Friday, while the Syrian opposition debated whether to attend the peace talks in Geneva next week.

Muallem also said, "I have handed Minister Lavrov today a plan of security measures in Aleppo."

"In that regard I asked Minister Lavrov to use his contacts to implement this plan and to establish a specific time when all military actions in this area should be ceased," he said.

On the peace talks next week, Muallem said Syria would "make every effort to ensure this event is a success and meets the aspirations of the Syrian people and the direct orders of President Bashar al-Assad."

However, US Secretary of State John Kerry warned the regime against using the concessions as diversion tactics ahead of the so-called Geneva II conference.

"Nobody is going to be fooled," Kerry said, "They can bluster, they can protest, they can put out distortions, the bottom line is we are going to Geneva to implement Geneva I, and if Assad doesn't do that he will invite greater response."

The New York Times cited rebels and civilians saying the offer of a ceasefire in Syria can be deceptive. The areas that don't agree to a ceasefire can expect aerial attacks from the regime, while those that do might face demands to turn over wanted figures and give up their weapons.

One rebel leader was quoted as saying it seemed "more like surrender."

Kerry said it would become increasingly clear that "there is no political solution whatsoever if Assad is not discussing a transition and if he thinks he is going to be part of that future."

The Syrian opposition met on Friday to decide whether it will attend Geneva, a matter that has further fractured an already divided coalition.

A key bloc, the Syrian National Council, has already threatened to pull out of the coalition if it votes in favor of attending Geneva II.

Complicating the situation are the continuing fierce battles between mainstream rebels in Syria and Al Qaeda-linked jihadists that monitors say have killed over 1,000 people in two weeks.

According to the UK-based Syrian Observatory of Human Rights, the death toll in the Syrian conflict exceeds 130,000 since March 2011.

More from GlobalPost: US, Russia call for 'local ceasefires' ahead of Syria talks