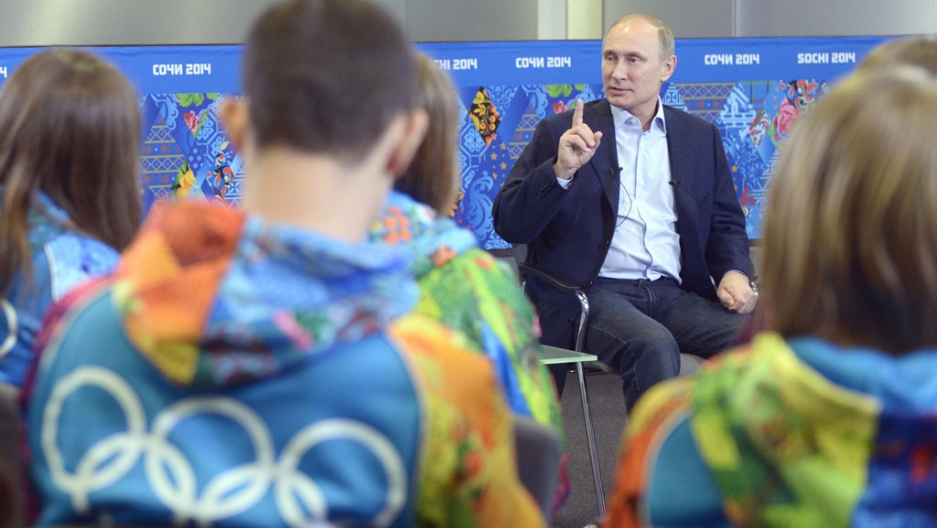 Don’t assume the rainbow-hued volunteer uniforms at the Sochi Winter Olympics mean that Russia is softening its hardline stance against homosexual propaganda.

Russian President Vladimir Putin said on Friday that his government has nothing against gay people, as long as they leave kids alone, according to Reuters.

“There is no ban on non-traditional forms of sexual interaction between people. We have a ban on propaganda of homosexuality,” Putin told a meeting with young volunteers preparing for the Games.

"We ban nothing, we aren't going after anyone, we have no responsibility for such contacts," Putin added. “People can feel free and at ease, but please leave the children in peace.”

But what of Russia's Olympic uniforms? Putin just said, “I didn’t design the uniform.”

The Winter Olympics begin in the Black Sea resort on Feb. 7. Putin was in the area on Friday to tour Olympic venues, meet volunteers and speak to reporters.

As he did that, two blasts near a restaurant in Dagestan injured seven people.

“The first explosion came when a grenade launcher fired at the second floor of the restaurant. The second came when a parked car blew up (as police arrived),” a government source told state media.

Dagestan, a North Caucus republic, is about six hours east of Sochi.

The government initially said the bombs caused fatalities, but the interior ministry quickly issued a follow-up statement that said there were no deaths.

Security has been another concern for Russia's Winter Olympics after terrorists killed 34 in twin bombings late last month in Volgograd. Another five people were found dead in Stavropol shortly after that.

Radicals have said they will target Sochi, while Putin tried to calm nerves ahead of the Games.

More from GlobalPost: Sochi the safest place in Russia not good news for rest of Russia