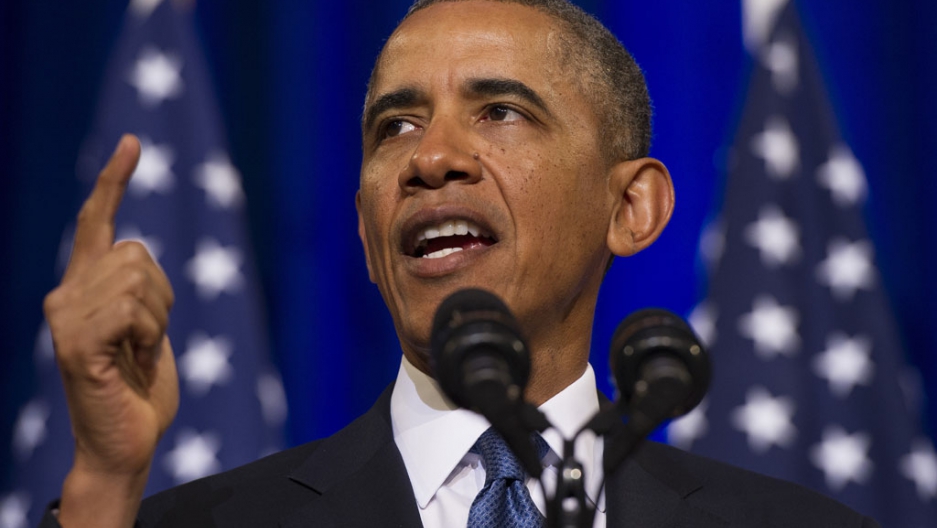 President Barack Obama speaks about the National Security Agency (NSA) and its surveillance program at the US Department of Justice in Washington, DC, on Jan. 17, 2014.
Credit: JIM WATSON
Share

But surveillance by the US government is still very much in force, both at home or abroad. Here are the major points to take away from the president's speech:

1. Obama called for limits to the government's use of Americans' phone records, and ordered intelligence agencies to get permission from the secretive Foreign Intelligence Surveillance Court before accessing the metadata.

President Obama: "I am...ordering a transition that will end the Section 215 bulk metadata program as it currently exists."

While the bulk collection of phone records will continue, Obama ordered Attorney General Eric Holder and the NSA to come up with alternative ways to hold the data within 60 days.

Possible options include keeping data with telecommunications firms that are currently compelled to turn it over to the NSA or to deposit it with a third party.

2. When the NSA gets permission to query data, it can't go quite as far as it used to, according to the new reforms outlined by Obama.

Specifically, the government can now only pursue phone calls that are two steps' removed from a number associated with a terrorist organization, rather than three, according to the president.

It's what was known in the industry as the "three hops" rule.

3. Obama also announced a ban against US eavesdropping on "friendly" world leaders, in a move designed to smooth over frayed relations between the US and countries like Brazil and Germany after reports surfaced about phone monitoring.

"The leaders of our close friends and allies deserve to know that if I want to learn what they think about an issue, I will pick up the phone and call them, rather than turning to surveillance," Obama said.

The president did, however, make an exception for when there is a "compelling national security interest."

4. Obama called for the creation of a new panel to serve as public advocates in cases handled by the FISC, the court created by the Foreign Intelligence Surveillance Act (FISA).

Their job will be to represent Americans, but only when the court faces "novel issues of law," a senior administration official told the Washington Post.

5. The president also called for extending some privacy protections to foreigners whose communications are "scooped up" by the US inadvertently.

More from GlobalPost: 16 disturbing things Snowden has taught us (so far)

Taken together, the reforms are an effort to assuage both the American public's privacy concerns and foreign outrage over the NSA's surveillance methods following leaks by former NSA contractor Edward Snowden that detailed the extent of domestic spying programs.

"Those who are troubled by our existing programs are not interested in a repeat of 9/11, and those who defend these programs are not dismissive of civil liberties," Obama said. "The challenge is getting the details right, and that’s not simple."

Read the directive below: