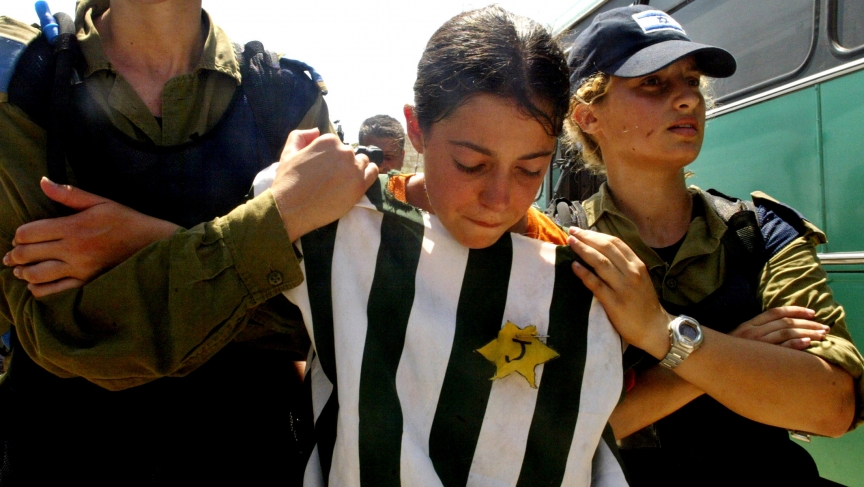 Israeli protester wearing a yellow Star of David patch similar to those the Nazis forced Jews to pin to their lapels.

In Israel, it may soon be illegal to call someone a Nazi.

Israeli lawmakers are considering a bill that would make Nazi name-calling and trivializing the Holocaust a crime — one that could land you in jail. The so-called "Nazi bill" passed its first major reading this week in the Israeli parliament.

Many countries in Europe outlaw Holocaust denial and Nazi-inspired speech. But why would the Jewish state even need such a law?

In Israel, the Holocaust is a fresh and living memory. The country comes to a standstill once a year as a siren wails to commemorate the six million Jews killed in World War II. People in Israel are extra-sensitive about the Holocaust. Still, Holocaust-related slurs are not uncommon.

Often, lawmakers in Israel invoke Nazi imagery for a whole host of ills.

Holocaust jokes are common in the country, and in casual conversation, some Israeli Jews will flippantly call a mini-disaster in their lives a “Holocaust.”

“Holocaust survivors are living among us here, and we are hurting them,” said lawmaker Shimon Ohayon, who proposed the Nazi bill. “It is really harmful for them. And we want to prevent this kind of actions in Israel.”

Yoelish Kraus, who belongs to a fringe religious group that rejects the secular Jewish state, collects protest posters that the Ultra-Orthodox community has used. One, from the early 1980s, features a swastika, in protest of an Israeli archaeological dig of Jewish graves. Another compares a police chief to Hitler for his gruff handling of ultra-Orthodox street protesters.

Kraus’ grandfather survived the Nazi death camps; the Holocaust is simply a part of his lexicon. When he and other ultra-Orthodox Jews have demonstrated in the streets, he said, Israeli security officers have often used tear gas and violent tactics. He said it has reminded them of the Holocaust.

In those protests, Kraus said that an Israeli officer will often say, "What do you want from me?  I am just following orders." According to Kraus, protestors will respond, "Adolf Eichmann said the same thing." Eichmann was one of the organizers of the Jewish genocide in Germany.

Dov Lipman, an American-born rabbi and a lawmaker, backs the Nazi bill and insisted, “I want every child growing up in this country to know that to call anyone that name in any kind of a personal attack is a criminal offense, you can sit in jail for it. Let that be a part of the process of education in the country, as well.”

Lipman said he himself was called a Nazi, when he protested ultra-Orthodox Jewish attacks on young girls who were thought to be dressed immodestly.

“I was surrounded and being called a variety of names, including Nazi,” Lipman said. “As the grandson of a Holocaust survivor, I actually remember thinking to myself, ‘My goodness, their grandparents might have survived the Holocaust together with my grandparents.’ We have lost all sense of proportion, we have had a breakdown of values. This is what this is all about.”

Critics of the bill say it limits free speech. Israel’s attorney general says Nazi symbols and epithets are offensive, but just because they offend the public, that doesn’t mean they should be criminalized. A similar effort to curb Nazi name-calling in the Jewish state failed in 2012.