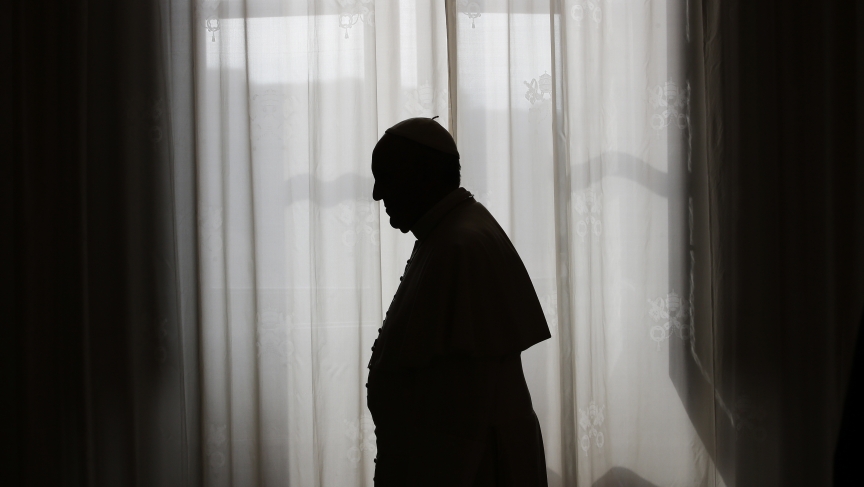 Pope Francis is silhouetted against window light at the end of a meeting with Equatorial Guinea's President Teodoro Obiang Nguema Mbasogo at the Vatican October 25, 2013.

"This is an unprecedented occasion," says Jane Little, a former BBC religion correspondent. "To see senior Vatican officials grilled over allegations that the Vatican protected pedophile priests at the expense of victims for years, it is unprecedented."

While the Vatican signed the U.N. Convention on the Rights of the Child in 1990, the UN's committee on the convention had never had the opportunity to question officials on the Vatican's repeated failure to protect children from abuse.

Today, Archbishop Silvano Tomasi told the committee that child abuse in any form could "never be justified." Yet he insisted that the problem is not just within the Catholic Church. "Abusers are found among members of the world's most respected professions, most regrettably including members of the clergy and other church personnel," he said.

"There was a lot said about how wrong abuse is," says the BBC's Jane Little, "how it is both a crime and a sin, and also how the Church has instituted policies to protect children." That's all true, she says. But part of the Vatican's argument is that it can't be held responsible for individual actions.

"There was also much made of the fact that local bishops and law enforcement have to deal with abusive priests and not the Vatican. And while that is actually technically true, it is, to say the least, somewhat disingenuous, because there is written evidence that the hierarchy in Rome actively disrupted police investigations," says Little.

So after many years of silence, why did Vatican officials choose to attend the UN committee meeting and defend themselves?

"They know it would be a big PR mistake not to go," Little says. "We've had intense criticism of a culture of cover-up, with strong evidence in multiple cases that the Vatican has put the protection of the clergy and the Church's reputation before the protection of victims and possible future victims of abuse."

And she says Pope Francis has dramatically shifted the tone of the Church. "The new emphasis is about the Church being on the side of the poor and the people. And the Vatican needs to be seen to be following through on that."

Still, Little says the fight between old and new ways at the Vatican is far from over. "It's a centuries-old monastic court, run by men, but they are men. We have ambitions, petty jealousies, intrigues ... we see infighting at the Vatican as we've never seen before," she says.

"This is supposed to be about cleaning up house. That said, this is not an institution that has ever been about openness and transparency and accountability. It's not a democracy. So, in many ways, today we saw this fascinating culture clash between a fairly obscure, secular committee hearing and this old monastic institution."