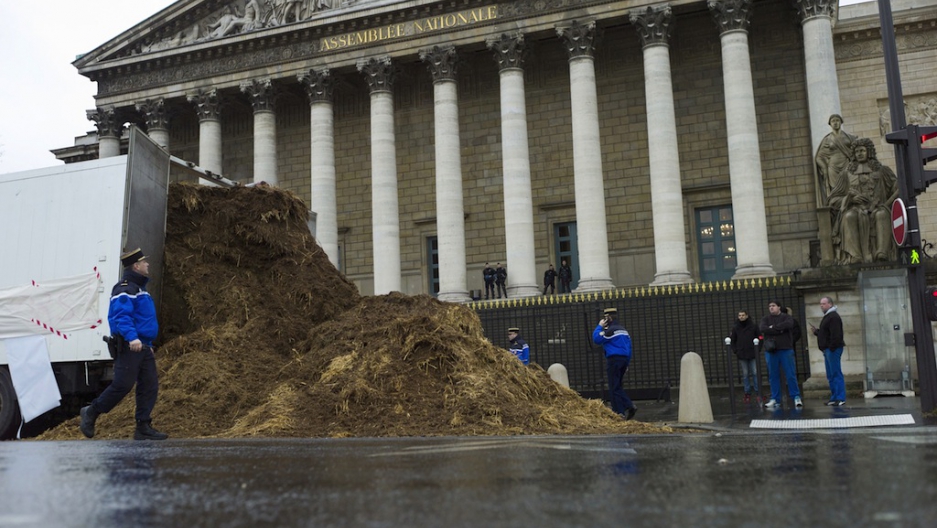 French police stand around a pile of horse dung that was dumped outside the national parliament building in Paris on Thursday.
Credit: FRED DUFOUR
Share

There are many ways to make a political statement.

You could, for example, nail your testicles to cobblestones like Russian performance artist Pyotr Pavlensky.

Or don a ski mask and jump around the altar of a church calling for the downfall of your country’s leader like the punk band Pussy Riot.

The key is creativity.

And, in the case of one government critic in Paris, access to a large truck and literally a ton of horse manure.

In what has been described as a “pungent protest against French politics,” an obviously very upset man unloaded several tons of dung in front of the national parliament building in Paris on Thursday.

"Out with Hollande and the whole political class," read a message on the side of the man's truck.

Police managed to detain the perpetrator before he was able to dump the entire truckload of manure outside the gates of the Bourbon Palace that houses the lower house of parliament.

The man is expected to face charges. Authorities have started cleaning up the mess, although it’s not clear what they plan to do with the dung. Fertilizer for the Luxembourg Gardens, perhaps?

No one seems to know yet what was behind his smelly statement, but it comes at a bad time for President Francois Hollande who is already dealing with a scandal over his alleged affair with the beautiful actress Julie Gayet.

More from GlobalPost: A presidential affair

Reports of the affair led to the hospitalization of Hollande's long-term girlfriend Valerie Trierweiler. Now Gayet is suing the magazine that published photos of the president allagedly emerging from her apartment building.

That hasn't stopped a French blogger from speculating about whether Gayet is four months pregnant with Hollande's child. The blogger, Le Reel, said the source was a journalist from the respected news channel M6.

There has been no official denial or confirmation of the pregnancy rumors, but of course that only means they have spread like wild fire.

Meanwhile, people have been left scratching their heads over what the beautiful, accomplished women in Hollande's complicated love life see in him.

Just to kick a man while he's already down: Hollande also faces record-low popularity ratings as he battles to breathe life into Europe’s second-largest economy.