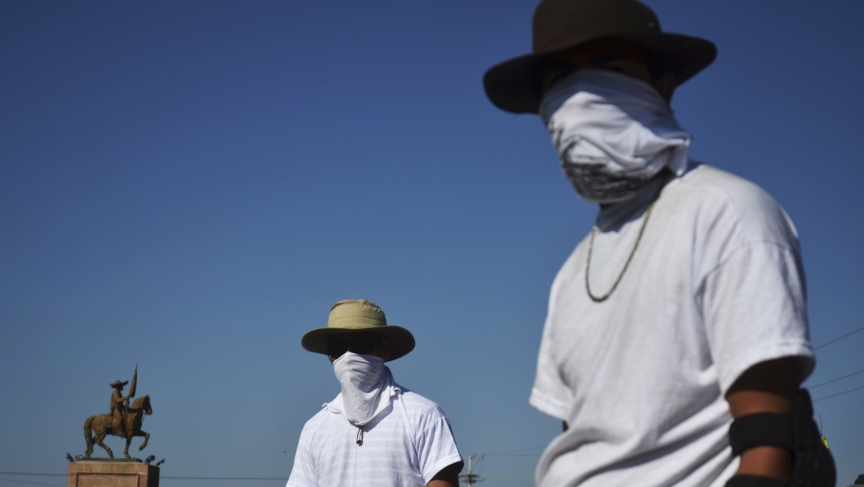 Vigilantes monitor a checkpoint near Apatzingan in Mexico's troubled state of Michoacan.

The Mexican state of Michoacan is facing a unique set of problems. Over the past year, an uprising of armed citizens has taken on a powerful drug gang and pushed them back. The role of the authorities is murky, but now the federal government has to decide how to bring this private war under control.

The drug gang in this conflict is unusual, even by Mexican standards. They call themselves the Caballeros Templarios, or the Knights Templar, after the famous medieval crusaders. It's a highly centralized, hierarchical organization, which espouses a strongly religious identity. But their faith apparently is no hindrance to murder and extortion, as well as producing and smuggling drugs. They specialize in crystal meth.

Last February, local farmers took a stand and said no to extortion. They formed self-defense groups, took up arms and started killing the gangsters. Within a few months, the vigilantes were mounting large, military-style operations, setting up cordons around towns and villages, then sweeping through and raiding known gang hang-outs. Some of these vigilantes are very well organized and have modern weapons, like AR-15s and Israeli assault rifles.

Global Post reporter Dudley Althaus has spent much of the week with the self-defense groups in Michoacan.

"These guys are very welcoming to outsiders," says Althaus. "They're a lot of young guys, I'd say from 18 to maybe 22 or 23, most of them. Several grew up in the US, in southern California. Some of them get paid, by whoever is paying them. But a lot of them are kids who, in civilian life, in normal life, they work as fruit-pickers, or one guy we talked to worked at a box factory. In some ways these younger guys are enjoying this. It gives purpose to their lives, and they think they're helping their communities."

Althaus says one of the main leaders is a doctor, whose only previous claim to fame was involvement in the local parent-teacher association. But Althaus says they aren't all saints. He says there are unconfirmed reports that at least a few are working on behalf of another cartel, Jalisco New Generation, from a neighboring state.

Overall, says Althaus "these people are filling a void left in their communities. The military's had thousands of soldiers here for more than seven years trying to take on the gangsters, and haven't really done anything. ... It's really a damning indictment of a lack of effectiveness of the federal forces and the federal effort here."

The crisis came to a head for the federal government this week when the vigilantes surrounded the main base of the Knights Templar, in a town called Apatzingan. The Mexican army and federal police then swept in on Tuesday to occupy the town to head off an attack by the vigilantes. The authorities are trying to detain the Templars themselves. The vigilantes say this is unsatisfactory and refuse to disarm.

Alejandro Hope says Mexico's government has been "schizophremic" when it comes to the self-defense groups. "Initially they saw them with a lot of suspicion, and even tried to disarm them in some localities. But over the course of the summer and fall of 2013, they probably started to see them as functional allies in the fight against the Templars. And this led them to adopting a policy of tolerance, adopting even in some cases full-on cooperation with these groups."

Hope says this is a major challenge to President Enrique Pena Nieto who came to office a year ago, pledging to reduce violence. He must now decide if the militias should be disarmed and dissolved, or allow them to consolidate their independent para-military status.