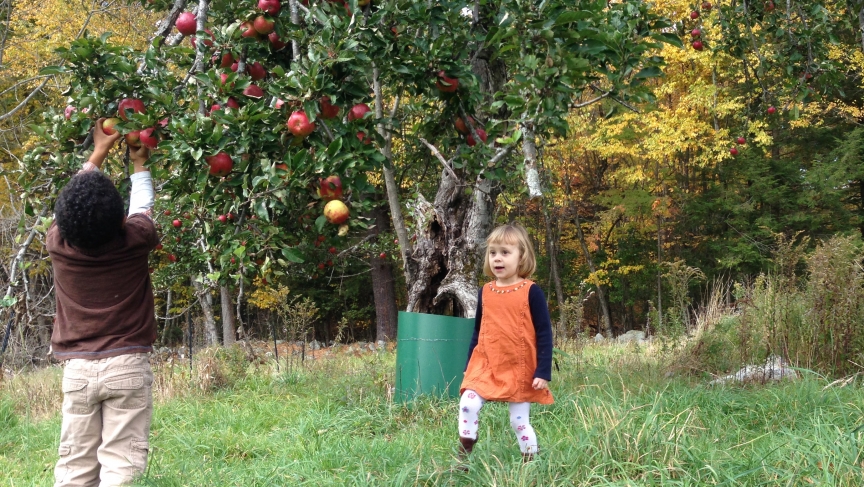 2013 was a banner year for apples in New England and even the old, long-neglected trees at the Thomson farm in Western Massachusetts got caught up in the frenzy.

My grandfather was an apple farmer. Actually, both my grandfathers were. One of them grew apples as a young man, the other grew them as an old man. That grandfather’s farm is still in my family, out in the hills of western Massachusetts. And it’s still got a few of its gnarly, old apple trees.

There are a handful of Cortlands, a few Northern Spys, and even a rare old Blue Pearmain — a tree from a family of apples that goes back a thousand years or so and, somehow or other, shares its name with my own family. My mom was Anne Pearmain.

We keep the old trees because we love them, but they’re pretty much played out when it comes to producing apples. Or so we thought.

This year, there was something in the air in New England. It was a banner year for apples all over and even these geriatric trees got caught up in the frenzy.

You could see the fruit from a hundred yards away. And as you walked up to them, you started stumbling on hard little balls hidden in the long grass. The ground around the trees was littered with "drops," way more than the porcupines and deer and bears could ever eat. The fallen apples didn’t have any commercial value — in fact, no one will buy apples as old school as these anymore — but it would’ve been criminal to just let them sit there and rot.

So one weekend, as the first frosts were hitting in October, my family and some friends decided to start picking… and make some cider.

The old trees are a tangle of dead branches, new shoots and the thorny tendrils of wild rose vines, but once you got up in them, the apples seemed as thick as grapes on a vine. You could snatch them two and three at a time. And the ones you couldn’t reach, you could just shake off the tree.

With those and the pretty good drops already on the ground, we had bag after bag of apples to dump into the tractor bucket and haul up to the house.

The picking felt endless. I spent most of my time in the trees — I had picked apples for a living one fall after high school and have never lost my love for climbing around in them —while my wife Edith took charge of sorting the apples. Some were definitely keepers for eating, and surprisingly tasty for trees that had mostly been neglected for decades. Most of the rest... well, slice off a worm hole on this one or a really rotten edge on that one, and we had a mountain of cider apples, ready for the grinder.

Which was where things started getting fun for the kids.

The grinder has a little orange chute on top that’s pretty much an invitation to kids to toss in apples. It’s sort of like a carnival game, or maybe a big version of one of those nursery school marble toys — except that at the bottom, instead of marbles, its corkscrew-shaped chute spits out something else that kids love — mush.

The mush gets dumped into the wooden presser and, on top of that, there’s a big crank. Turn the crank, the mush gets squeezed, and — to the kids’ amazement and before you know it — there’s cider pouring out the bottom.

The kids had a blast drinking this fresh-off-the-tree cider, learning how something they love gets made, and helping make it themselves.

As for me, I had a blast sharing that experience with them and knowing we were all getting sucked back into a swirl of deep history. That history went back to New England 200 years ago, when apples and cider were staples of just about every household. It went back to Europe a thousand years ago, when growers first started giving their local varieties names like Pearmain. And it went all the way back to the mountains of central Asia, maybe 5,000 years ago, where people first started cultivating apple trees.

From there, apples spread to every inhabited continent and weaved their way into local and global culture like no other fruit. They even got Adam and Eve kicked out of the Garden of Eden. So there’s a lot going on in one little jug of cider.

Over the course of two weekends, we produced more than 200 jugs of cider — more than 100 gallons. We gave a lot of it away, the kids took some to school for show and tell, and the rest we stashed in a big old freezer.

It might not last us a thousand years, but we’ll be drinking it for a good long time.