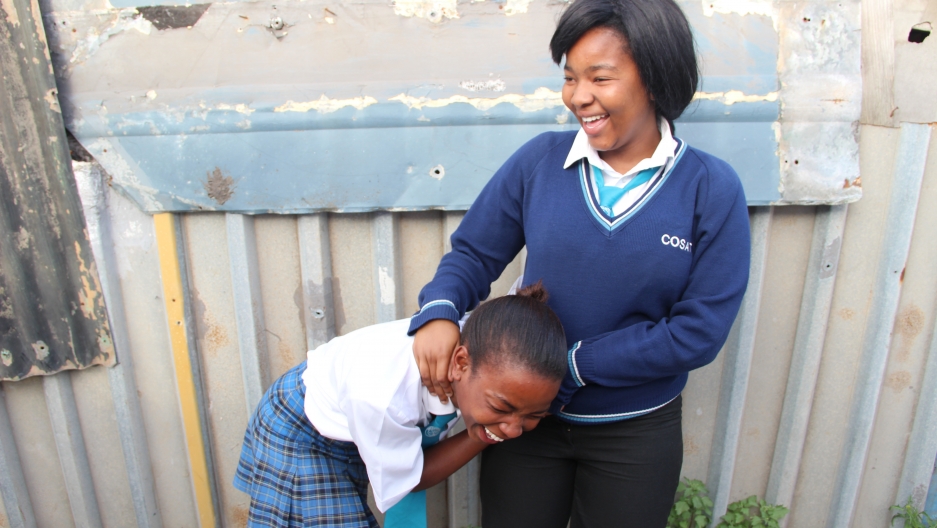 Bahle (right) and her twin sister Buhle were seniors at the Centre of Science and Technology (COSAT) last year.

For the past 12 months, I have been following the lives of students at the Centre of Science and Technology (COSAT), a high-achieving public high school in an impoverished part of Cape Town, South Africa. One of my goals has been to document the obstacles that students face, and to explain why some children succeed and others fail.

This is the story of one student who, for a time, seemed to lose her way.

I met Bahle last January, at the start of the South African school year. She was the head girl at COSAT, a position that is sort of like senior class president.

I was impressed by her ambition and confidence. “I want an education so that I can make a name for myself,” she told me. When I asked about her future, she said with certainty in her voice, “I’m going to be a medical doctor.”

In October, toward the end of the school year, I bumped into Bahle after class one day. I asked how things were going with her college applications.

I was caught off guard. What had happened to becoming a doctor?

“I don’t think I can be a doctor now, seeing my grades,” Bahle said. And, since she didn’t think she could be a doctor, she didn’t want to apply to college at all. She said she would probably just live at home next year and try to get a job.

For many students, not going to college can be the right choice, but COSAT is designed to prepare students for higher education. During most years, every senior graduates, and more than two thirds go on to college – many to study math and science.

I didn’t get the sense that Bahle had made a calculated decision to skip college. It seemed like she had simply lost confidence in herself. I wondered who, if anyone, might offer her some guidance?

A few days later, I visited Bahle at her home – a small, metal shack tucked along a narrow dirt path. When I arrived, she was sitting on the couch with her twin sister, Buhle. Their mother joined them.

I soon got the impression that Bahle’s mother wasn’t the type to give advice on college – she had never finished high school. When I asked about her twin daughters’ plans for next year, all she mentioned was the high cost of tuition. Bahle’s sister, Buhle, had already been accepted to college.

“I don’t have money for both of them,” Bahle’s mother said.

Maybe this was the reason Bahle wasn’t applying to college, I thought. She was worried her mother couldn’t afford it.

As we continued talking, a woman appeared in the doorway. It was Bahle’s older sister, Cindy, here on a surprise visit from her home in Johannesburg.

I asked Cindy why she had come. She gestured toward her younger sisters.

“I’m here to guide them – especially this one,” she said, pointing at Bahle.

Cindy said not only had Bahle not applied to college – she also hadn’t applied for financial aid from the government, which meant that the family didn’t know how much college would cost.

“She hasn’t applied for anything,” Cindy said, emphasizing the last word.

Bahle started to cry. Their mother put her hand on Bahle’s shoulder and tried to comfort her, saying it was okay. But Cindy, the older sister, didn’t want to hear it.

“Why would you say it’s fine?” Cindy said. “It’s not fine. You don’t have money, but it’s not fine. They must go to universities, they must ask for assistance, they must be serious.”

Cindy turned to me and said her mother hadn’t helped her apply to college, either. As a result, Cindy hadn’t submitted her applications in time, and didn’t get into a good school. She didn’t want her younger sister to make the same mistake.

Cindy invited Bahle to come stay with her during the Christmas break, to spend time together and talk about Bahle’s future. It was more of an order than a request.

A few weeks later, Bahle went. I wondered: What would she decide? Would COSAT’s head girl, who had been certain she would become a doctor, give up on higher education entirely?

Last week, the school year at COSAT officially ended. The seniors were back at school to collect their final report cards. The principal, Phadiela Cooper, led a small graduation ceremony inside the auditorium.

Afterwards, I caught up with Bahle in the courtyard. I asked her the big question. Was she going to go to college?

“Yeah, I’m applying,” she said, smiling. She said she was going to submit applications the following day. “I’m crossing fingers for my marks to please them,” she said.

Bahle’s final grades were better than she had expected – and that had given her hope. But what really convinced her to apply to college, she said, was the time she spent with her older sister, Cindy.

Bahle said Cindy told her that she had to apply – it wasn’t a choice. If Bahle couldn’t study medicine, she had to choose something else.

During those conversations, Bahle realized something.

Bahle is applying to programs in pharmacy and biotechnology. She said her older sister, Cindy, will make sure she follows through.