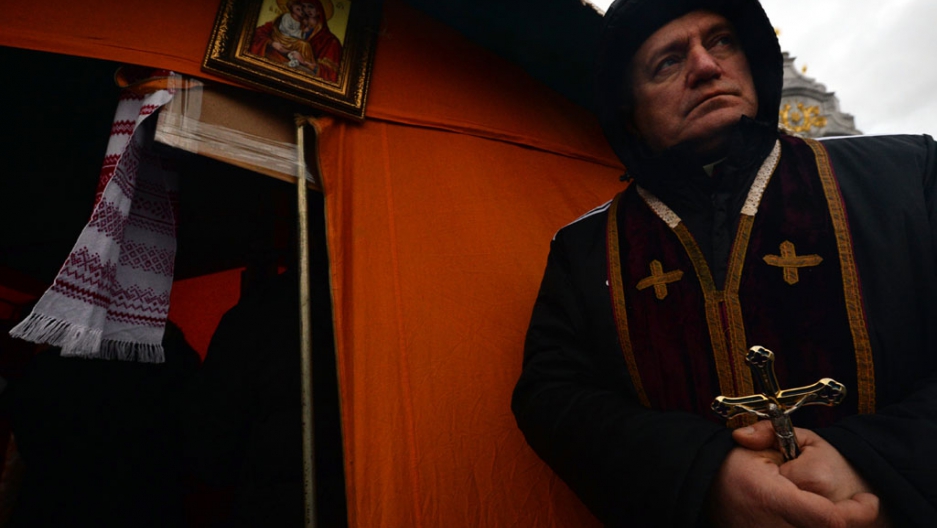 The president’s press office issued the statement Tuesday after Ukraine’s Culture Ministry sent a warning letter to church officials about their work with pro-EU demonstrators.

“People should have the right to pray where they wish,” Yanukovych said, according to the presidential press service.

“We need to relax the legislation requirements and ensure believers have an opportunity to pray where they wish.”

Upset Ukrainians have besieged Kiev’s Independence Square, or the Maidan, for two months after the government abruptly rejected an agreement with the European Union in favor of ties with Russia.

The Greek Catholic Church has erected tents in the square where people can pray, give confession or even have babies baptized.

The letter to Major Archbishop Sviatoslav Shevchuk reminded him that it’s illegal to hold services outside a church.

“We thought that the prosecution of priests was a thing of the past,” Shevchuk said in response, according to AFP.

On the UGCC website, Shevchuk said the church is playing an essential role in preventing human rights abuses.

He also called for “honest and open dialogue.”

“Our church has always been true and will remain so for the future despite any threats,” the website reads.

The church dates back centuries and is unique in that it embraces Byzantine traditions and the Roman Catholic Church.

It was forced underground in the early 20th century as a threat to Soviet rule. Hundreds of UGCC clergy were sent to Soviet gulags for refusing to embrace the Russian Orthodox Church.

The church appears to be bolstering protester resolve today. Since Ukrainian independence in 1991, the Greek Catholic Church has witnessed something of a renaissance.

AFP says it boasts 5.5 million followers, or about 12 percent of the population.