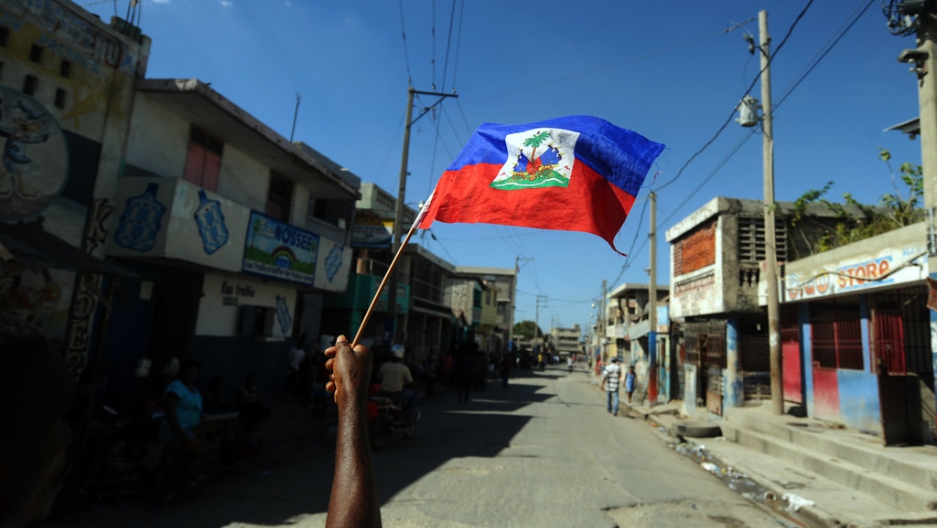 A man holds a Haitian flag as he takes part in a protest demanding that Haitian President Michel Martelly step down in Port-au-Prince on January 13, 2014. The protesters walked from one sector of the center of the capital to the parliament, where Martelly was to deliver a speech on the country's political and economic situation.
Credit: Hector Retamal
Share

PORT-AU-PRINCE, Haiti — In the four years since Haiti’s disastrous earthquake, the United States has promised $3.6 billion in aid, at least $2.8 billion of which has already been spent.

Has it helped? GlobalPost examined more than one dozen studies and audits to estimate how much of that money made it through US government and NGO bureaucracies to the ground in Haiti — and what good it did there.

* Only 5.4 percent of US government spending in Haiti through fiscal year 2012 went to Haitian organizations or companies. The US Agency for International Development (USAID) is trying to spend more money locally but faces hurdles in Congress, which has resisted efforts to reform food aid policy.

* A comprehensive health survey released last year shows Haitians live longer and have better access to health services than they did a decade ago. In the town of Mirebalais, a new, state-of-the-art hospital launched by a private American NGO is training the next generation of top-notch Haitian medical professionals.

* The US is spending $170 million — its single largest Haiti investment — to attract manufacturing to the new Caracol Industrial Park in Haiti’s North. But the massive investment has created fewer than 3,000 jobs, and the project may not have the funds to construct the port needed to export the industrial goods.

* The US promised to build 15,000 permanent homes but completed only 2,649 of them before ending its housing construction program, deciding instead to extend financing to Haitians directly for them to build their own homes.

* USAID extended $37 million in credit to Haitian banks so they could issue loans to Haitian business to spur economic activity. But the agency didn’t adequately monitor the banks, two of which didn’t loan enough of the money, which was disbursed mostly around Port-au-Prince — and rarely to women or first-time borrowers. “The fact that borrowers were not getting these loans indicates that they were not able to get the funds they needed to improve their lives and to stimulate the economy,” according to a 2013 audit.

A struggle to help Haiti help itself

The United States led the world in its commitment to help Haiti recover from the 2010 earthquake, pledging $3.6 billion of the total $10 billion in aid promised by nations around the world.

But the extent to which that money is creating sustainable progress remains unclear even four years after it began.

“There have been aid programs for such a long time here,” said Harmel Cazeau, information manager for Haiti’s National Coordination for Food Security. “But when you evaluate it, they don’t have durable impacts.”

In the year after the earthquake, less than 1 percent of all foreign aid went to or through Haiti’s government, according to an analysis by the Washington-based Center for Economic Policy Research (CEPR). USAID data released last month showed that the rate of US aid disbursed through fiscal year 2012 to Haitian organizations, 5.4 percent, was far below USAID's global average of 14 percent, according to CEPR.

So little of America’s aid to Haiti actually goes through Haitian hands that if US taxpayer dollars went to "waste," the reasons must lay inward, with the US government agencies, NGOs and American contractors who controlled the cash.

If the dismal record of USAID’s most trusted contractor is any indication, these entities are unreliable to say the least. A government audit of Haiti projects performed by USAID’s largest contractor, Chemonics, shows the company routinely failed to implement its aid projects correctly. In 2012, GlobalPost discovered that a $2-million, US-taxpayer funded USAID/Chemonics project constructed a building for Haiti’s parliament that was unfinished and unusable.

“The problem is the aid isn’t really helping the people with these problems be released from their problems,” said Cazeau. “It only keeps them stuck in poverty.”

In an attempt to change that, USAID recently launched its Forward Progress program, which aims to increase the amount of money it sends directly to local companies and NGOs.

“If the old model was hiring a contractor to build a road, the new model is partnering with engines of American innovation — corporations, foundations, NGOs, and faith-based communities — to help nations build innovation economies and democratic societies connected to our own,” said Rajiv Shah, head of USAID. He went on to emphasize that “aid should be conditional on real commitments to reform — including fighting corruption, making market-oriented policies, and collecting more domestic revenue.”

To that end, USAID is working to build Haiti’s’ capacity to oversee its own affairs — that is, to govern effectively and wean itself from foreign aid.

But to accurately judge America’s record in fulfilling its promise to Haiti, one must look to where the bulk of US money is being spent: the massive new industrial park that has become the single largest American investment in post-earthquake Haiti.

A partnership between Haiti’s government, the Inter-American Development Bank and the United States, the 600-acre Caracol Industrial Park in northern Haiti hopes to create tens of thousands of manufacturing jobs and to generate revenue in a part of Haiti far removed from the nation’s capital.

The United States is investing $170 million in the controversial project, the majority of which will be used to build power plants to generate electricity for the clothing and other factories it hopes to bring here.

But some critics say the money would be better spent on agriculture, health or education. Haitian opponents of the project say the 15-year tax break given to the primary company opening shop there, combined with the low wages of factory jobs, means Haiti and its people will benefit only marginally. Others say the payoff simply isn’t worth the investment: The park’s financiers say it has the potential to generate 65,000 jobs, but thus far it has created fewer than 3,000.

Defenders of the industrial park urge patience, arguing that it will take time to build Haiti’s reputation as a manufacturing hub. They say Haiti’s location gives it enormous potential to produce clothes, shoes and other manufactured products and ship them to American consumers quickly and cheaply.

At least, in theory. In reality, there is no port in the surrounding area that has the capacity to ship the products that are to be manufactured there.

That’s why the architects behind the project deemed the construction of a new port critical to the success of the entire industrial park: According to an audit by the US Government Accountability Office, the park itself, the power plants and the port “each must be completed and remain viable for the others to succeed.”

But the audit found that the funds raised thus far “will be insufficient to cover a majority of projected costs” of building the port, predicting a startling deficit of between $117 million and $189 million.

“Port construction will begin more than 2 years later than originally planned, in part because of a lack of USAID expertise in port planning,” the audit reads. Unless the US or other Caracol partners commit even more capital to the already expensive project, the port might never be completed at all.

“You’ve created a huge project like this — but how do you bring containers in and out of it?” said Fils-Aime. He said the fact that the US-led investment has yet to attract a single American company to the park says a lot about the project's viability.

“The people who paid their taxes for this money — they want returns, and returns for the Haitian people on whom that money was spent,” he said.

So far, as Fils-Aime sees it, America’s largest investment in post-earthquake Haiti “hasn’t lived up to the expectations.”