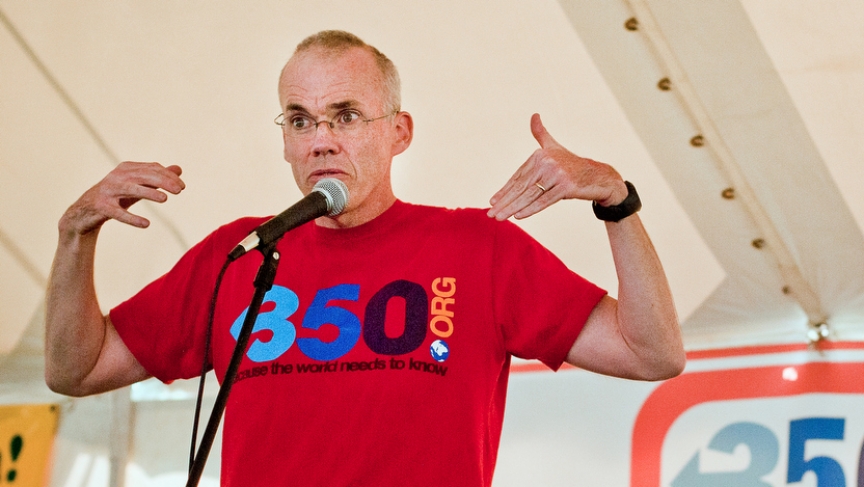 Despite his recent takedown in Rolling Stone, climate activist Bill McKibben has not completely given up on Barack Obama when it comes to climate change.

“We’ve got three more years of the Obama administration and one hopes that they will do a lot more than they’ve done. And they have done a couple of good things,” the agitator and influential author of such books as "The End of Nature" says.

But the main thing that’s happened over the last five years, McKibben says, “is the Obama administration has helped foster a huge expansion in gas and oil drilling and in exporting of coal out of this country. And the truth about climate change is there’s no way we can possibly control it if we dig up coal and gas and oil and burn it.”

McKibben credits Obama with successful efforts to roughly double vehicle fuel efficiency and cut emissions from coal-fired power plants. And he concedes that the president’s record on the climate is better than that of his predecessor.

That’s what McKibben himself says he’s making — an all-out effort over the next two to three years to rally a grassroots movement to “break the power of the fossil fuel industry.”

For McKibben, that means a lot of travel. By plane. “Way too much,” he says.

He’s fully aware that air travel is one of the most polluting ways of getting around, and that other climate activists and concerned citizens have stopped flying in order to cut their carbon footprints. And he certainly does other things to try to reduce his.

“I’ve got solar panels all over the roof, the first electric car in the state of Vermont, and all that,” he says. “But frankly, I don’t try to fool myself that that’s what’s solving climate change … If I thought that my flying or anyone else’s was going to make the difference between the climate warming or not, I guess that’s what I’d spend all my time focused on …

“[But] we’re not going to win this one lightbulb, one airplane seat at a time. We’re going to win it, if we win it at all, by standing up to the power of those guys and beating them politically … This is a structural and systemic problem and it’ll be solved if and when structures and systems are changed, most importantly, if and when we put a serious price on carbon, to reflect the damage it does in the atmosphere."

Ultimately, he says, it comes down to making the fossil fuel industry clean up its own mess.

“The problem we face comes from the fact that this industry alone gets to pour its pollution into the atmosphere for nothing. They get to put out their garbage for free. And as long as that continues to happen we have no chance.”

If and when that happens, McKibben says, big improvements in energy efficiency and carbon pollution and big changes in things like transportation will follow.

And he’ll be able to stay home a lot more.

In this extended interview with The World's Marco Werman, climate activist Bill McKibben gives his take on President Obama, the fossil fuel industry, and the problem of flying around the world to further his crusade.