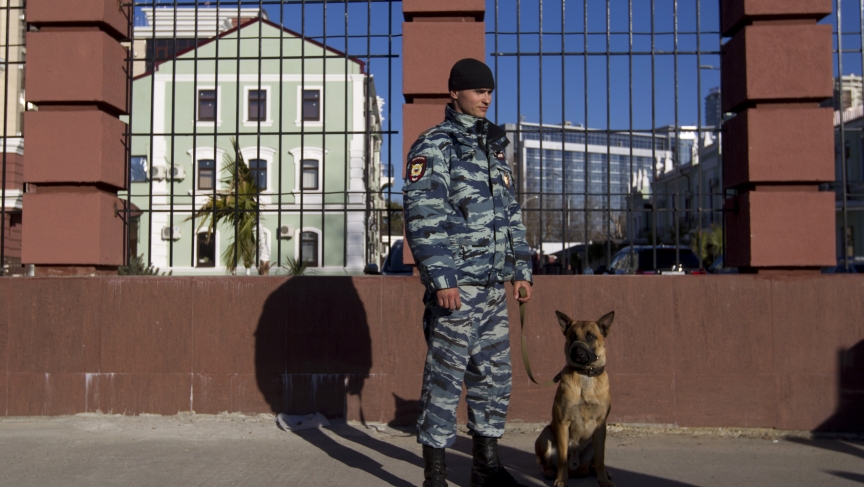 One of roughly 40,000 Russian police and security agents stands on duty in Sochi.

It's almost crunch time for anyone heading to the Winter Olympics next month in Sochi. That goes for athletes, as well as security personnel.

Last week, the Russian government started to implement a police lockdown, to keep any trouble out of the Olympic venues. But some participants have back-up plans just in case.

These Olympics are taking place in Russia's volatile Caucasus region. Last summer, an al-Qaeda-linked group there called on its supporters to disrupt the Olympics. And there were two suicide bombings last month in the southern Russian city of Volgograd.

The US ski and snowboard teams have hired a Boston-based company called Global Rescue to be on hand to help, in case of emergency.

"Global Rescue has had a relationship with the US Ski and Snowboard Association for about the last eight years," says Dan Richards, CEO of Global Rescue. "What we provide are crisis management response and contingency planning, in addition to the actual mechanism of evacuation should it be required. We typically respond to two types of emergencies: medically-oriented emergencies and security-oriented emergencies. And sometimes both." He says they have plenty of experience mounting evacuations in different parts of the world — mostly medical.

Richards says currently his contract is only to support the Ski and Snowboard Association, but adds that other people attending or participating in the games can purchase individual memberships.

The security threat in Sochi is unprecedented for his company, Richards says. Georgia, Dagestan and Chechnya are all in the neighborhood. Normally, he says, you "don't have individuals who have committed themselves and their terrorist organizations to disrupting the event — and trying to potentially kill as many of the athletes and spectators as possible."

Richards says Global Rescue is relying on the Russians to provide physical security on the ground. More than 40,000 police and security agents have been deployed.

"For us, we employ people who have deep experience dealing with very difficult medical and security issues. Many of these folks, particularly for this event, do have military special operations backgrounds," he says. "We employ SEALs and Rangers and former special forces to perform these kinds of difficult missions. So if you are stuck in a place like Sochi that does happen to have an event, these are the guys you want coming for you."

When asked if his personnel will be carrying arms, Richards says. "we don't normally comment on the tools of the trade that might get used, but in this particular instance, with Russia, there are going to be plenty of guns of ... the Russians themselves. So there's no need for that."

Still, the Russian authorities, he adds, aren't exactly thrilled by his group's presence. "But I don't think they see us as a nuisance either. We're really enablers, and we're not going to get in the way. I think that when you're a country like Russia and you're trying to secure these games, the more people you have on the ground that are part of the population that know how to deal with crises, that understand and can plan for how they might respond should a crisis occur, the better."