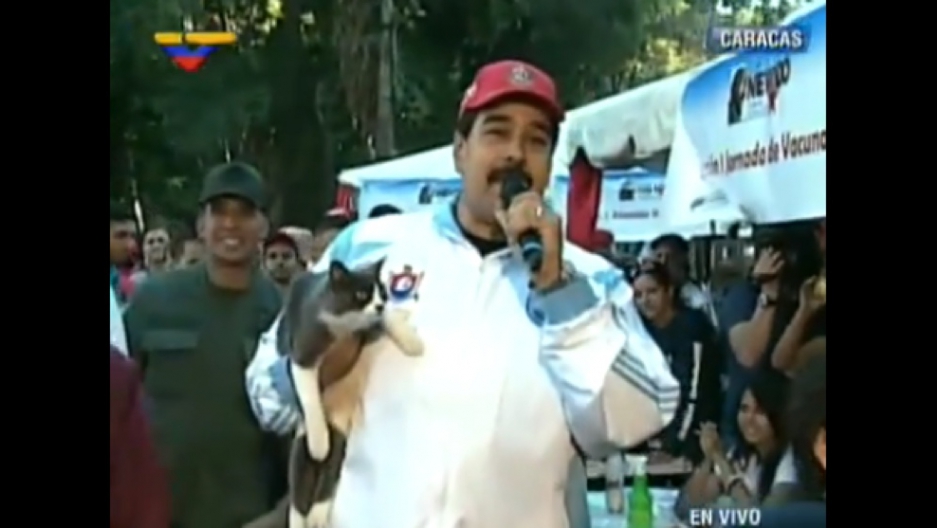 CARACAS, Venezuela — Days after the murder of a celebrity beauty queen brought the country’s horrific crime to the fore, President Nicolas Maduro this week launched a plan he said will spread “infinite love”: he adopted a pet.

His top cabinet ministers showed support, too, nuzzling rescued felines and canines alongside him.

But government critics say the portrayal of the Maduro government's softer side is really a smokescreen for serious problems. Those include some of the world’s highest rates of homicide and inflation.

The fatal shooting last week of former Miss Venezuela Monica Spear and her British-born partner were a chilling reminder of the country’s murder rate, which last year more than doubled that of Iraq, NGOs say. The government, however, claims homicide numbers are actually declining.

Inflation, meanwhile, hovers above 50 percent, with Caracas recently topping the list of world’s most expensive cities for expats.

Cost of living woes did lie closely beneath the surface of Maduro’s "love" plan. His newly adopted cat in hand, the president announced the government will expand its strict price controls to pet food and veterinary services.

Such controls, the president insists, are necessary to stop businesses from unfairly marking up prices. Economists say the controls are contributing to a shortage of basic goods.

But back to the cute animals.

The pro-pet plan, called Mission Nevado, will provide support for volunteer collectives to sterilize animals, campaign against animal abuse, and aim to create a public hospital for pets, according to authorities.

The name isn’t short of symbolism.

Nevado, which means "Snowy," is the name of the dog said to have accompanied 19th-century Latin American independence hero Simon Bolivar into battle.

The late Hugo Chavez named his socialist movement, the Bolivarian Revolution, after Bolivar. Long before his death in March 2013, Chavez spoke about extending the revolution to the animal kingdom. Thus, the name for the mission is a natural.

Indeed, Bolivar and his trusty Nevado appear on official imagery created for the animal mission.

In the Andean city of Merida in 2003, children gave Chavez a gift of a pet dog named — you guessed it — Nevado.

Another dog that spontaneously appeared during the 7.5-mile funeral procession for Chavez was called Nevado by the National Guard.

Chavez was famous for fiery speeches. But Mission Nevado's slogan comes from one of his gentler quotations: “The ability to love is infinite.”

And so, the government has called on Venezuelans to show some love and volunteer with the mission for a week in early February.