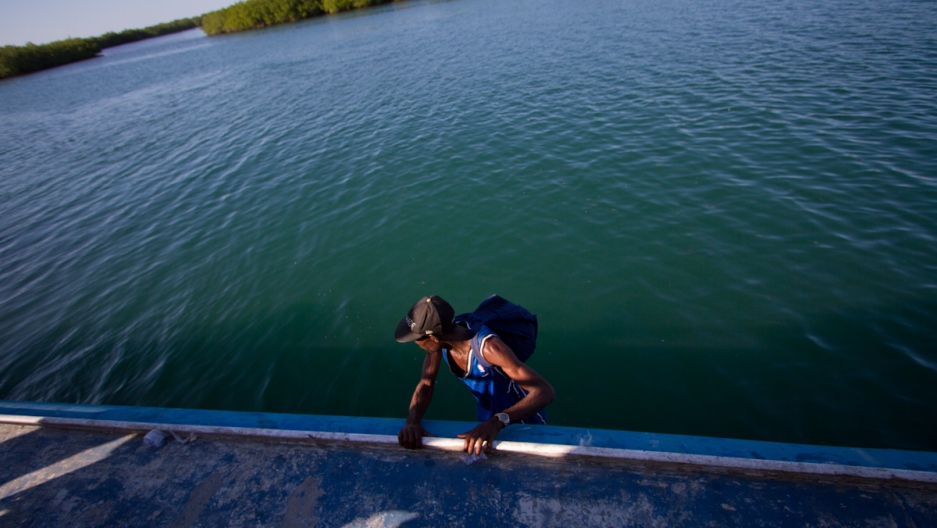 A man walks along the rim of a ferry at the wharf in Anse-a-Galets on Haiti's island of La Gonave.
Credit: Jacob Kushner
Share

ANSE-A-GALETS, Haiti — To traverse the 13-mile stretch of Caribbean Sea to the island of La Gonave, one must choose between three types of boats, none particularly safe.

First there are the “fly boats,” speed boats with outboard motors that race a dozen people from one side to the other. From time to time they flip over. Few records exist as to how many people survive.

Then there are the two large steel ferries that carry a few hundred passengers slowly across the sea each day. In 1997, one of those ferries sank, killing 200.

Last, there are the sailboats — wooden ships built from hand-carved lumber and pieced together with hammered nails. Their canvas masts are reminiscent of those in the "Pirates of the Caribbean" movie franchise. They carry everything from rice to dry cement, motorcycles, cars and trucks.

In better times, Haitians travel to and from the 300-square-mile island as a matter of routine, however risky. In times of emergency, like the massive earthquake of four years ago, they come to La Gonave in droves.

In the first 19 days after the earthquake, 630,000 people fled Port-au-Prince, 7,500 of them to La Gonave, according to a 2011 study. Untold thousands more fled there from other earthquake-affected areas. Some NGOs put the total at 20,000, which would mean the island’s normal population of approximately 100,000 increased by between 15 and 20 percent almost overnight.

To feed and house them all would have required a substantial amount of the $9 billion pledged by international governments for Haiti’s recovery. But little of that aid — or the aid allocated by private donors — reached the people of La Gonave, GlobalPost found. Most of the migrants returned to the mainland in the months after the earthquake, leaving permanent residents in a dire state.

In fact, the two largest towns of the often overlooked island remained among the 12 most food-insecure towns in all of Haiti even two years after the earthquake, according to a World Food Program survey. The island’s food crises deepened in October 2013 when Hurricane Sandy hit, flooding and uprooting crops and washing away seeds.

Of 180 aid projects worth $239 million tracked by an alliance of US-based NGOs, only three involved any activity on the island whatsoever and only one was implemented exclusively on La Gonave. None of the 71 health-related projects totaling $96 million took place there, nor did any of the 101 projects tracked by the World Bank.

* Canada disbursed approximately $450,000 to the Canadian NGO Hope International Development Agency to distribute food to families overwhelmed by relatives and friends fleeing Port-au-Prince. The program also built grain storage silos to store food in the long-term and distribute seeds to farmers to plant the following season.

* The Inter-American Development Bank disbursed some $5.4 million in financing to the island for agricultural technology to improve crop yields.

A 2002 audit of US Agency for International Development (USAID) programs in Haiti discovered that no one from the agency’s robust food aid program had even stepped foot on the island during the four years prior to the audit.

In response to the audit, USAID said, “the example of the island of La Gonave used by the auditors, was a true exception rather than the norm in view of the logistical difficulties involved in serving the island.”

Indeed, La Gonave is so remote that the epidemic of cholera that has spread to nearly every corner of Haiti barely touched the island. Four months after the outbreak began, a visiting USAID official found that the primary cholera clinic in Anse-a-Galets was receiving only one to three cholera patients a day, most with mild symptoms. Not a single case of cholera was contracted in the town of Grande Source, residents there say.

Like most of the small communities scattered across La Gonave, Grande Source remains mostly untouched by foreign aid but for the work of Roots of Development, a Washington-based organization that invests in development projects there ranging from water systems to capacity building for the community’s leaders.

The organization’s director, Chad Bissonnette, said the residents of Grand Source have had no choice but to take matters entirely into their own hands: In 2009, 85 women from the village formed a business cooperative to generate income to pay their children’s school fees.

“Most (international) organizations would find 10 donors to sponsor kids, which leads nowhere,” said Bissonnette of the typical, unsustainable type of aid given by many international donors in Haiti.

Instead, the women of Grande Source came up with the idea of working together to purchase food products such as oil, flour, spaghetti, and vegetables in bulk on the mainland and then to transport them across the sea to sell on the island at a lower price than the vendors who bring over just small amounts at a time. Not only would the plan generate employment and revenue for the women and their families, but it would also lower the price of food for the entire community, helping alleviate the food security crisis.

As elsewhere in rural Haiti, food prices on La Gonave soared after the earthquake as supply chains were interrupted and ships were prevented from docking at the wharf in Port-au-Prince, which collapsed.

The situation became so severe that Haiti’s government, in conjunction with one American NGO, eventually began handing out food vouchers this year to 4,700 families on the island.

Participating in that program was agronomist Ocule Wilner, 53. He explains that each family received 2,000 gourdes ($50 USD) per month to buy food or anything else they wanted. The amount has since decreased to 1,500 gourdes a month, and in January, the program will end entirely.

“We have NGOs that do things, but as soon as they leave, the projects collapse,” Wilner said. “When you have people who are in extreme poverty, you have to [give them food aid]. But what will we do tomorrow? We need long-term programs.”

The mayor of La Gonave’s principal town, Anse-a-Galets, agreed. He said that after the earthquake, “all the food the white people brought went there, to Port-au-Prince. But we were the ones feeding everyone,” said Ostine Sainvil, 32. “I wouldn’t say they've forgotten us. But the central state doesn’t have any political interest here.”

For years before the earthquake struck Haiti, migrants from rural areas like La Gonave had been flooding the capital at a dizzying pace. With an annual urban growth rate of 4.5 percent, Port-au-Prince's population was on pace to double between 2010 and 2025.

Hardly a square foot of open space in Port-au-Prince goes unused. Even the wide ravines designed to carry runoff water to the ocean fill daily with thousands of people buying and selling food and clothing.

Urban planners attribute the high death toll from the earthquake (the official figure is 230,000) largely to the fact that so many people were crowded into unstable buildings and homes.

Jonas Jean Louis, a La Gonave resident, counts his son among the toll.

“Every parent wants their children to have the best education possible. That’s why my son died on January 12, 2010,” he said, explaining that he sent his 17-year-old to Port-au-Prince for school, like many rural parents who can afford to do so.

The two were shopping together for groceries downtown when the earthquake struck. Jean Louis somehow made it out the front of the store. His son did not.

“I saw him behind me and then I didn’t. And I never saw him again,” said Jean Louis.

Jean Louis said Haiti’s government and international donors should invest here in agriculture and tourism to help residents generate revenue for their island.

But given how little post-earthquake aid has reached here, he said he isn’t hopeful.

“I think sometimes the rest of Haiti forgets we exist,” he said. “We don’t have big business like the mainland. We’re cut off.”

Experts say the continued migration from rural areas to Port-au-Prince is actually dangerous given the findings of a US geological study that analyzed historical seismic activity in Haiti and concluded that when one large earthquake occurred, another usually followed shortly thereafter.

“The historical pattern of earthquakes in Haiti indicates that an earthquake of magnitude 7 or larger could strike southern Haiti near Port-au-Prince at any time,” according to the study.

Another disaster may already be in the making.