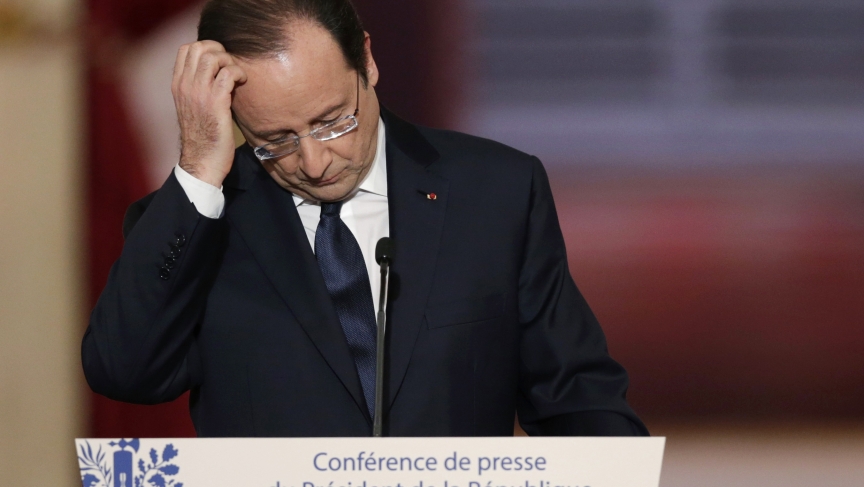 French President François Hollande did a lot of talking today. He outlined his priorities for the remainder of his time in office: cutting public spending, creating jobs and cutting waste.

He opined at length about French military involvement in Africa, French journalists held in captivity around the world and even the future of a unified Europe.

But he refused to talk about his personal life, in particular, allegations of an affair with actress Julie Gayet. Hollande, according to The Guardian, said he would clarify the situation by the time he flies to the US in February to meet President Barack Obama.

Hope flies on the wings of a DC-3

If you live in the remote jungles of Colombia, flying anywhere can involve a trip back in time. In those areas, air travel means hopping aboard an American aircraft last used in large numbers during World War II — the twin-engine Douglas DC-3.

PRI's The World's John Otis says there are no frills, such as seat-back trays or toilets. Seatbelts are optional. But they get the job done, when nothing else can.

The price of honesty in the world's most corrupt nation

Transparency International ranks Afghanistan as the most corrupt country in the world, tied with Somalia and North Korea. Today, the man dubbed "Afghanistan's most honest man" posed for photographs with the Interior Minister and gave interviews to local journalists.

Abdul Saboor has been a traffic policeman for 24 years. He has refused all bribes and, as a consequence, lives in a house with 28 people, has only been promoted once and earns just $200 dollars a month. The Washington Post looks at the sacrifices that someone must make to remain honest in a nation where corruption is rampant.

First it was driving, now it's swings?

Women in Saudi Arabia aren't allowed to drive — despite many protests and demonstrations. Now, it seems, they're not allowed to use swings.

Photos have emerged on social media of Saudi Arabia's religious police ordering women to stop using swings in a park. The photos have prompted strong reactions, both by those who agree with the police decision and those who advocate for women's rights. Emirates247  reports that some worry swinging could encourage men "to harass or molest" the women.

Shangri-La is a mythical community in the Himalayas where people live in harmony and nearly forever. But it is also an ancient village in Tibet, which was renamed to attract tourists. And the trick was very successful. Until this past weekend.

PRI's The World reports that a fire destroyed some 250 homes and may have destroyed the town's tradition. It may have also swept away the reason to preserve the village against pressure to develop the area.

A Cold War radio contest — 44 years in the making

In 1969, a teenager from East Germany sent a postcard across the Iron Curtain — to enter a competition on a West German radio station that he was illegally listening to. Gunter Zettl heard nothing back and forgot about it. After the fall of the Soviet Union, he settled in West Germany and three years ago looked up the files held on him by the East German secret police. There was the postcard, never delivered.

He sent it to the radio station, again. The German website The Local reported that, on Tuesday, he finally got his prize: a record by the band The Creation.

More than 260,000 people have been displaced or inconvenienced by a tropical low that moved into the southern Philippines this week. According to AccuWeather, 20 inches of rain fell in some areas between the weekend and Tuesday morning, killing at least 21 people. Another 10 people are missing. The storm system responsible for all the misery will remain stationary over the Philippines for most of the week.