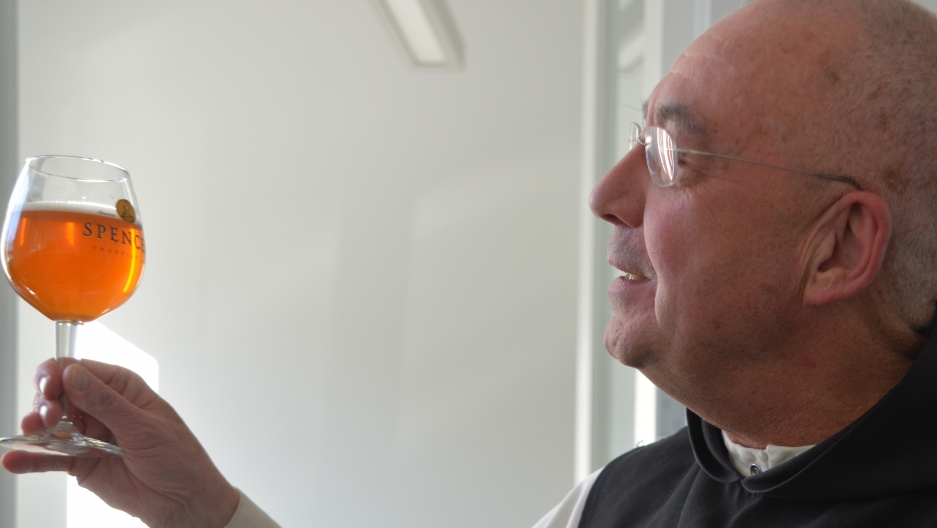 If we're going to talk monks, now might be a time to confess. When I first heard about beer being brewed by Trappist monks in the US, I thought, "what's the big deal?" Then, I spoke with Kate Baker, the "hoperations" manager at Craft Beer Cellar in Belmont, Massachusetts.

Actually, there are 10 Trappist breweries — another just opened up in the Netherlands. Similar to the designation champagne, a Trappist beer may only be designated "Trappist" if it passes certain criteria. The brewery must be on monastery property, operated by Trappist monks, and its revenue can only go to support the monastery.

You may have heard, and even tasted, some of the Trappist beers: Chimay, Westmalle, Rochefort, Orval, the coveted Westvletern.

Until now, Trappist brewing has been mostly a Belgian thing. But in December, the Trappist monks of St. Joseph's Abbey in Spencer, Mass., rocked the beer world with the news that they had been designated the latest brewery to be recognized as Trappist.

The monk behind the Spencer Brewery is Father Isaac. He's just as you would imagine a Trappist monk: long white robe, black hood, bald with glasses. He's even got a joyful laugh when he talks about brewing beer, despite the stressful five years it took to get the brewery going.

"There's a little stress because you're going to be evaluated and ... really, a Trappist Brewery outside of Europe? What are they going to do?" said Father Isaac.

St. Joseph's Abbey was founded in Nova Scotia in the 1825. After a fire, the monks relocated to Rhode Island. Then, after another devastating fire, the monks moved to an old dairy farm in Spencer, Mass., in 1950.

The Trappist order began in the 17th century, and is officially called the Order of Cistercians of the Strict Observance. And they are strict observers of the Rule of St. Benedict.  An important part of that rule states that the monks must "live by the work of their hands."

Trappist monasteries are self-sustaining. Monks farm, make and sell cheese, and there's even a monastery that sells lentil soup to support itself. The monks of St. Joseph's make jelly and vestments. But several years ago, the abbot commissioned a 10-year plan, and the outlook didn't look good.

Upkeep for the monastery was projected to increase and jelly sales weren't going to cut it. The monks debated over how to support themselves.

"Do more jelly? But we're in a pretty tight market," explained Father Isaac. "Do more vestment? But [the] priest population in the US is declining. Generate electrical power? But [the] primary site to build wind turbines was in the flight pattern of Worcester Airport and the FAA turned us down."

The FAA's loss was the beer world's gain.

And so the story goes that one of the brothers with a bit of a craft beer obsession — as much as one can have in a monastery — convinced the others that beer just might be the answer. The monks contacted brewer Dann Pacquette, co-founder of Pretty Things Beer and Ale Project.

"My first instinct is that someone was pulling my leg," Pacquette said about the email he received from the monks. He answered the email anyway, and soon he and his wife and Pretty Things co-founder Martha found themselves advising the monks of St. Joseph's on the long history of monastic brewing.

If alcohol and devout religious practice might seem like a funny combination, it's not, says Pacquette. Monks have been making beer for more than a 1,000 years. Before brewing to sell, they brewed for health reasons.

"Before tea and coffee, you had beer to drink," said Pacquette. "Beer is really just sanitized water."

The monks of St. Joseph's began experimenting with brewing in a room in the old dairy barn.

"We burned the mash on the first brews, which means you couldn't drink them, you wouldn't want to drink them," said Father Isaac.

It took 24 test brews until they settled on the beer that they hoped to sell. It's a refectory ale, a simple golden ale based on the beers that Belgian monks traditionally brewed for themselves in the abbey.

The new brewery on the abbey grounds looks like Ikea meets The Da Vinci Code. In December, Father Isaac brought the beer to Belgium for a tasting and for final approval by the International Trappist Association.

"I was encouraged when they asked for refills," said Father Isaac, "I thought, 'we'll be okay.'"

You can't buy the beer at the Abbey and you can't even visit — another International Trappist Association rule — but the beer is being distributed in Massachusetts.

For those outside the state, well, as Father Isaac says, beermaking is like monastic life. You have to have patience.