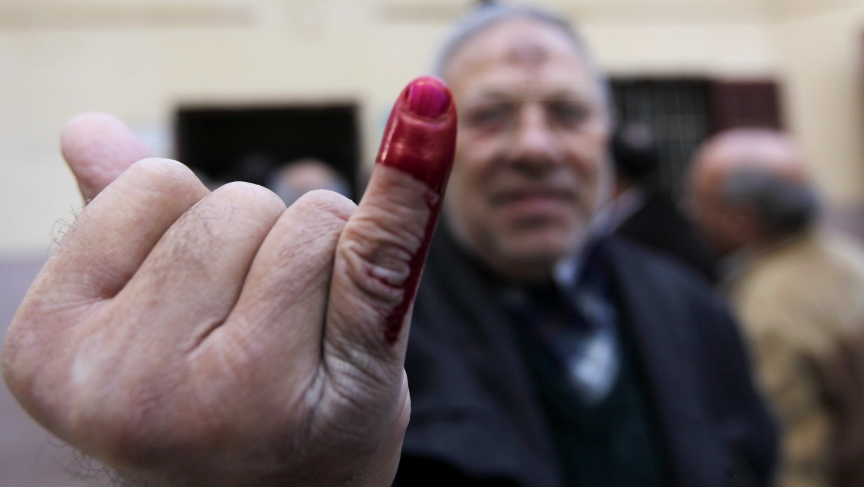 An Egyptian man shows his ink-stained finger after voting in Cairo in the referendum on a new constitution.

After three years of political upheaval, Egypt is voting on a new constitution this week.

The military-installed government is hoping the referendum will give it a popular mandate — something it's lacked since the army ousted the freely-elected government of Mohammed Morsi last summer. Morsi now languishes in jail and his Muslim Brotherhood was recently outlawed as a terrorist organization.

Egyptians are voting on Tuesday and Wednesday and the government is hoping for a big turnout. The streets are plastered with posters calling on voters to "Say yes to the constitution and no to terrorism." The Muslim Brotherhood is simply calling for a boycott.

"The vote isn't really on the constitution, in terms of the actual document," says H.A. Hellyer, a nonresident fellow at the Brookings Institution and the Royal United Services Institute, who's in Cairo. "It's very much about other issues: stability, moving forward on the economy, support for the military, opposition to the Brotherhood, opposition to terrorism."

"On the other side, it's the same thing," Hellyer adds. "The Brotherhood isn't pretending it's opposed to the constitution on the basis of its articles, but to the process itself, saying 'No! We already have a constitution, we're not interested in this one, and participation in the referendum itself is recognizing the coup that led to the ouster of Mohammed Morsi.'"

Hellyer says everyone expects the constitional referendum will pass. "But the turnout is very important. The better the turnout, the better the result for the government."