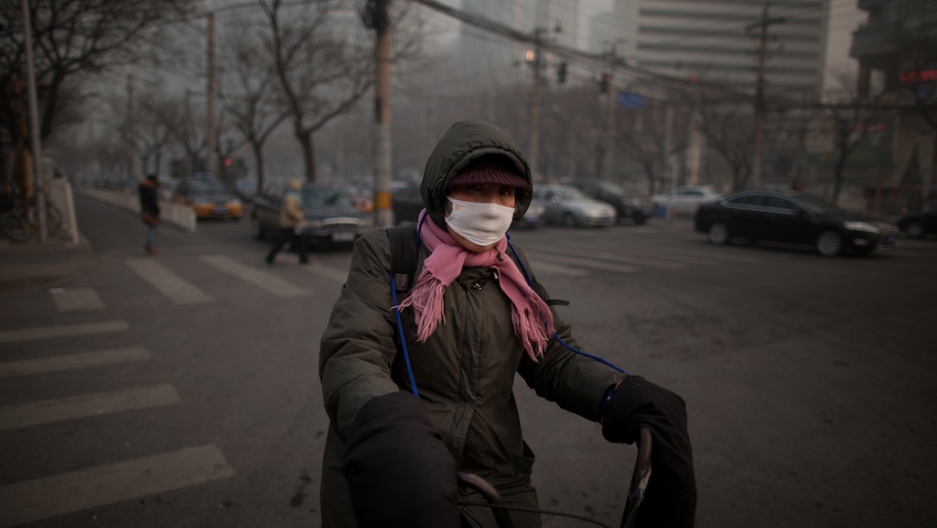 A cyclist wearing a mask prepares to cross a street during heavy pollution in Beijing on January 12, 2013.
Share

Bad news for the environment.

After years of decline, US carbon dioxide emissions increased slightly last year, according to a new report by the US Energy Information Administration.

That said, America is still a little better than the world's worst polluter: China.

The 2 percent jump in CO2 emissions in the United States was largely the result of higher natural gas prices last year, which prompted some utilities to switch back to a dirtier energy source — coal, according to The Washington Post.

Here, we take a look at the world's five biggest polluters, according to CO2 emission estimates in 2012 from the EU-based Emission Database for Global Atmospheric Research.

China overtook the United States as the world's biggest carbon dioxide polluter in 2006, and has topped the list ever since.

In 2012, the communist country pumped an estimated 9.8 billion tons of CO2 into the world's atmosphere from the burning of fossil fuels such as oil and coal. And while emissions grew at a slower pace in 2012 than previous years, China still accounted for 70 percent of the global increase in CO2 emissions that year.

China's smog levels are notorious. But air pollution is soaring to new heights due to the country's rapid industrialization, reliance on coal power and increased car ownership for a booming population.

It doesn't help that environmental laws are often ignored, according to green activists.

As stated above, America's carbon dioxide emissions had been going down for years. The decline can be partly attributed to the economic recession, improved energy efficiency, and the shale-gas boom.

But new figures show CO2 emissions actually increased 2 percent in 2013 as more utilities turned to coal for energy after a steep rise in natural gas prices.

India's carbon dioxide emissions shot up 7.7 percent in 2012, with those from coal growing at an even faster pace of 10.2 percent.

That despite the South Asian country recording its lowest GDP growth — 4 percent — in a decade.

One in three Indians currently live in "critically-polluted" areas. And of the 180 cities monitored by India's Central Pollution Control Board, just two — Malapuram and Pathanamthitta in Kerala — have what are considered "low" levels of air pollution.

A Russian woman wears a face mask to protect herself from smoke in Moscow.

Russia's carbon dioxide emissions plunged after the collapse of Soviet-era smokestack industries, but it remains the world's fourth largest CO2 polluter at 1.7 billion metric tons in 2012.

Hundreds of cities currently exceed pollution limits, with Moscow, St. Petersburg and the far-northern Siberian city of Norilsk among the worst offenders.

Two cities — Norilsk and the central Russian city of Dzerzhinsk — made the environmental group Blacksmith Institute's list of the world's most polluted places this year.

The suffocating smog that blanketed swathes of China hit parts of Japan in March 2013.

Japan recently watered down its target to cut carbon dioxide emissions despite the 1.3 million metric tons of CO2 it produced in 2012.

The new target, announced in November, reverses course from a goal set four years ago and now allows a 3.1 percent increase in emissions from 1990 levels rather than seeking a 25 percent cut.

It reflects the country's increased reliance on fossil fuels in the aftermath of the Fukushima nuclear disaster in 2011.