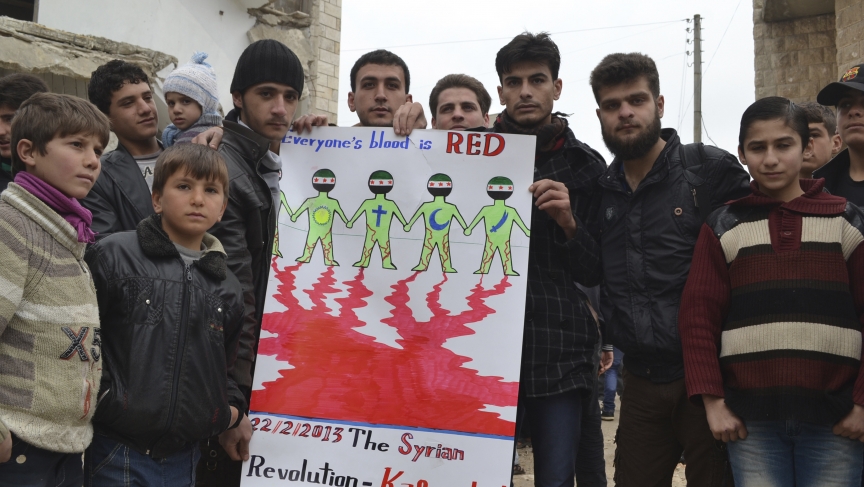 Syrian demonstrators pose with a sign in Kafr Nabl, near Idlib.

The northwestern Syrian town of Kafr Nabl has long been regarded as the "creative hub" of Syria's revolution.

The town's artists are famous for their bold posters and banners, often written in English, lampooning President Bashar al-Assad. But in recent months, the town's residents have turned their anger toward another group that had gained a foothold in town: ISIS, an extremist faction that's also known as the Islamic State of Levant and Iraq.

The ISIS jihadists raided the offices of Kafr Nabl activists in December, according to Syrian opposition member Mariam Jalabi who has been in touch with local residents.

"They came in, they took equipment, they raided offices, they actually arrested people," says Jalabi, who directs the New York office of the National Coalition of Syrian Revolution and Opposition Forces. "The people of Kafr Nabl realized that they cannot tolerate such fundamentalist forces in the city, so they've created a pressure on the Free Syrian Army to push the fundamentalists out."

Jalabi says the power shift happened about 10 days ago.

"Now they consider Kafr Nabl free again from the regime forces and the ISIS forces," she says.

Jalabi, who was born in Damascus and raised in the Golan Heights, says ousting the extremists in Kafr Nabl wasn't easy.

"They are not Syrians, these foreign fighters that are coming in. They don't speak even the language," she says. "They're coming in to do jihad, to create some kind of Islamtic state. And that's not what Syrians came out for. Syrians came out for a democratic civic society, where everybody can have equal rights.

"When they come in the name of God and they're talking Islam, it becomes difficult for people to resist them. And we don't know how to resist them," she adds. "One of the activists from Kafr Nabl was telling me ... that we have been living in a dictatorship for 50 years and there's a little tyrant inside everyone of us."

"It is very important for me to see people who, against all odds, are able to create some kind of a civic society where everybody respects everybody else, which I hope that all women and all minorities within the Syrian revolution can have for the future," she says.