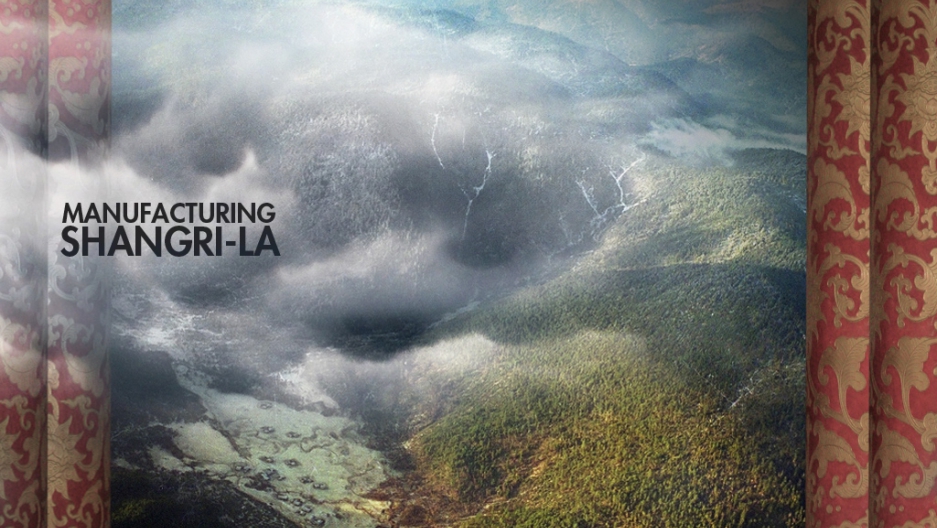 UPDATE, Jan. 13, 2014: Over the weekend, a fire erupted in the “old town” of Shangri La, China, destroying hundreds of wooden shops and homes in a majority Tibetan area. GlobalPost visited this town last year for a series of stories about the ways in which China is trying to make Shangri La (which was given its mythical name in 2001) a sort of Tibetan Disneyland.

At the time, Shangri La’s “old town” was under heavy construction, with wooden hotels and shop-houses going up on every corner. Long-time residents complained that many of the buildings in the traditionally Tibetan quarter — which was filled with bars, backpacker hostels, English-language cafés, and trinket shops selling identical wares — had been hastily constructed in a pseudo-ancient style, to attract tourists, whose numbers were rising.

While some Tibetan entrepreneurs had managed to profit from the boom, most of the businesses belonged to Han Chinese.  Below is the first of three Global Post stories — originally published on Feb. 13, 2013 — on this strange, beautiful, conflicted place.

SHANGRI-LA, China — The fabled land of Shangri-La is a “delightfully favored place,” where monks live for hundreds of years, in the shadow of a “dazzling pyramid,” the mountain Karakal. The air has a “dream-like texture.” Every breath yields a “deep anesthetizing tranquility.”

That, at least, is how Shangri-La is described in "Lost Horizon," British author James Hilton’s classic 1933 novel.

“If I were to put it into a very few words, my dear sir, I should say that our prevalent belief is in moderation,” one of Hilton’s beatific monks says. “We inculcate the virtue of avoiding excess of all kinds.”

Hilton’s mythical land is a far cry from this real-life Chinese village of Shangri-La: a dusty, dingy upstart that is flinging moderation to the winds to become a Disneyesque tourist trap.

China’s experiment with manufacturing its very own Shangri-La began in 2001, when the logging town of Zhongdian — a remote, predominately Tibetan village standing on an 11,000-foot plateau in China’s southwestern Yunnan province — decided to change its name.

The move was mostly economic: Beijing had banned logging up-country in Yunnan after a series of massive floods along the Yangtze River. Though other towns competed fiercely for the right to rename themselves — and arguably had better reasons — Zhongdian prevailed.

In the decade since, Zhongdian has transformed itself completely. It may not be exactly what Hilton imagined when he penned his classic novel.

Shop after shop peddle tourist trinkets and fake tiger pelts. Where mud houses once stood, cheesy art galleries, restaurants, hostels, and even a cupcake shop now stand in “Old Town.” Signs tout yak burgers and Tibetan clothes for rent. A self-described reggae café has a cannabis leaf painted in the colors of the Jamaican flag.

“Eighty percent of [Old Town] was knocked down and rebuilt to look Tibetan,” said Jason Lees, owner of The Raven, the longest-running business in Old Town. The Raven serves as a watering hole for locals and the small, hard-drinking community of American and British expatriates in town.

An Englishman with matted hair and smoke-cured voice, Lees moved to Shangri-La a decade ago to escape the tourist hordes that had overwhelmed Lijiang, four hours away.

He’s profoundly ambivalent about the change. On the one hand, his business caters to tourists. On the other, as Shangri-La’s tourist sector has grown, wealthy developers and investors have moved in, driving up the rents.

“A culture changes to sell itself once the money comes in,” he said. “This used to be a special place. It used to be more open-minded, multicultural. Once it started to repackage itself as Tibetan, as a simplified version of itself, it changed.”

Even the 300-year-old Tibetan Buddhist monastery outside town has been turned into a cash cow. Tickets cost $15 each. In many respects, it feels like a theme park: Inside, groups of 25 to 30 tourists line up to deposit cash in a box in exchange for a blessing from a seated, desultory monk. Guides in Tibetan costumes wearing wireless mics dawdle by the entrance, yawning. At the top of the temple, a stand sells ice cream and moon pies. Behind the main monastery building, a towering crane is constructing a large additional temple.

Such changes depress longtime residents like Kevin Skalsky, who fondly recalls when Zhongdian had a wild-west feel.

He and his wife moved to the city 13 years ago as one of the only non-Chinese couples in the area. Two Americans from Washington state, they raised four children here — but now they’re hoping to leave, and move to a more remote village several miles away. Over a dinner of yak meat, he bemoaned the commoditization of Zhongdian.

“It’s been unrelenting,” said Skalsky, who runs an outdoor adventure company that takes tourists out on motorcycles, Jeeps, skis and kayaks. He has long, gray hair, a powerful handshake, and a West Coast drawl reminiscent of "the Dude" in "The Big Lebowski."

Of course, some residents see it differently: Zhongdian may not have become Shangri-La in reality, but it did become a lot richer. While a number of locals complain that most new businesses are owned by Han Chinese, some Tibetans are also making out very well.

One is local entrepreneur Dakpa Kelden, who welcomes the influx. A Tibetan who studied for years in India, Kelden is sometimes called “the king of Shangri-La” because of his extensive contacts and thriving new businesses. We spoke on the balcony of his new hotel. Sporting a beautifully tailored khaki jacket and a new iPhone, he switched fluently between Tibetan, Mandarin, and Indian-accented English. He said he had “exactly six minutes” to talk.

Founder of the Shangri-La Association of Cultural Preservation, Kelden sees immense opportunities for Tibetans in Shangri-La, though he laments that most tourists come to the village for only one day. Rooms at yet another boutique hotel he is building range from $128 a night to $240 for a suite.

“Tourism for us is a great opportunity,” he said. “Now the problem is we have mass tourism. They come and want to take pictures — they don’t want the experience.”

Across China, many tourist sites are facing the same mass tourism issues, as for the first time millions of Chinese have enough income and time to afford travel around their own country. China as a whole is seeing a surge in pleasure-seekers and day-trippers. In 2010, Chinese took more than 2.1 billion domestic trips and generated more than $200 billion in revenue, according to China’s National Tourism Administration.

In the Chinese popular imagination, Yunnan province, with its soaring mountains and profuse wildlife, is a must-see destination, like Yellowstone or Yosemite for Americans. While rich in biodiversity and in minority cultures, Yunnan has long been one of China’s poorest provinces, with a GDP-per-capita income one-quarter of that in Shanghai.

Now Yunnan’s government is courting tourism as the cure to its economic ills. Given the staggering growth, the tacky Shangri-La of today may soon look quaint.

"I don't know what kind of experience you’ll get when there are three times as many tourists as today," says Ed Grumbine, a professor of botany who has spent the last several years studying in Yunnan. "Lijiang is the classic example. It's grown from 3 million to 10 million [visitors] a year, and there’s no stopping it. Most foreigners would go to Lijiang, and unless they're really into the Walt Disney experience, wouldn't like it. [But] the average Chinese tourist is much more accepting."

Meanwhile, the real-world Shangri-La faces a 21st century existential conundrum: The authentic charm that the village sells as a tourist draw is rapidly changing the traditions that underpin that charm. Even the attitudes of native groups are changing.

“Younger people no longer wear the traditional outfits, now they see the city people and want to dress like them,” says Yang Qiong, 27, a Naxi minority who works as project manager at the Yunnan Mountain Heritage Center, a non-profit devoted to preserving local culture. “Some wear high heels with their traditional outfits.”

She spent several minutes outlining the ways that her organization is creating sustainable, tourist-friendly handicrafts — beekeeping, knitting — but at last admitted that in some ways residents refused to adapt to the change.

“We all still call it Zhongdian,” Yang said. “Shangri-La is too long a name.”

Read part two in this series: Profit quest imperils one of world’s most stunning landscapes

Read part three in this series: China’s Shangri-La for minorities