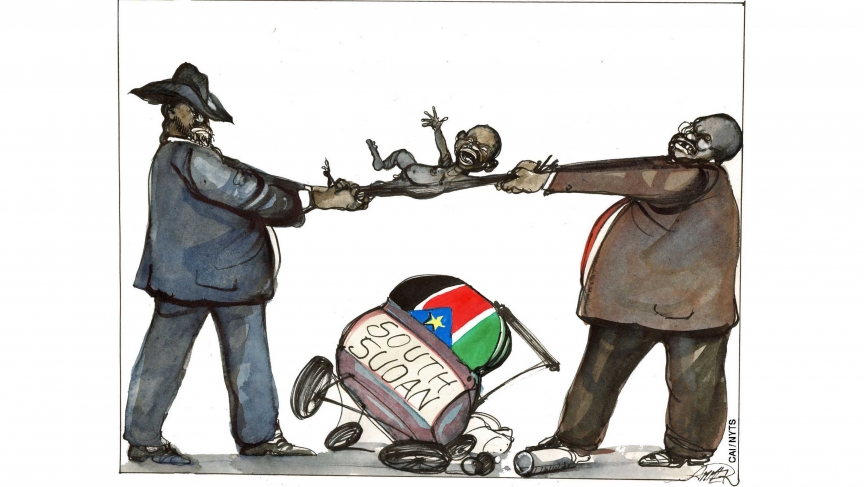 Austrian cartoonist Ammer weighs in on the struggle over South Sudan.

It was a tough week for children — from the young nation of South Sudan to a 10-year-old Afghan girl pressured into becoming a suicide bomber.

The girl, known as Spozhmai, failed to detonate the bomb strapped to her body and is now safe in protective custody after an Afghan soldier spotted her wearing the suicide vest. She says her father and brother beat her, until she agreed to their plan. The girl is thought to be the sister of a prominent Taliban commander.

She has asked Afghan President Hamid Karzai to find her a new home, away from her family.

“My spiritual torment is unbearable. One and the same question: if my rifle killed people does that mean that I, Mikhail Kalashnikov, am responsible for people's deaths?"

It's a moral dilemma worthy of Tolstoy. Mikhail Kalashnikov, inventor of the AK-47, the world's most popular assault rifle, died last month at age 94. His weapon may have revolutionized warfare around the world, but it seems its inventor did not sleep easy. A long letter from Mikhail to the head of the Russian Orthodox Church shows a man tormented by guilt, as The Telegraph reports.

Mohamed Ali was lucky to escape Somalia's civil war with his family when he was 10. Now, he's set up the Iftin Foundation to help other young Somalis avoid the militias and terror groups operating there. And dry cleaning is one of his answers.

Ali found that many young people join militias because they can't find jobs. Enticed by offers of food, clothing and money, these young recruits become indoctrinated and end up being the ones who put on suicide vests. Ali works to help youth start their own businesses. He told PRI's The World about some of his success stories — including a young man who started Somalia's first dry cleaning business.

Israel buries Ariel Sharon — a 'bulldozer in war and peace'

Ariel Sharon's funeral was held Monday, eigth years after he slipped into a coma and left public life. And the influential Israeli leader is as controversial in death, as in life.

In the Jerusalem Post, Tovah Lazaroff has a heartfelt appreciation of the man he describes as "Israel's indomitable lion," and a "bulldozer in war and peace." But others don't share in Lazaroff's glowing send-off. The Atlantic's Goeffry Levin writes of a former leader whose influence still hampers efforts to find peace in the Middle East.

Can any Pope really be liberal?

Since he came to office, Pope Francis has attracted praise from a surprising quarter — liberal critics of the Vatican. From his apparently tolerant remarks about atheism and homosexuality, to his famously modest lifestyle, the Pontiff has become, to some, "the obvious new hero of the left."

Yet Luke Coppen argues in the Spectator that Pope Francis' liberal fans are doomed to be disappointed. After all, he writes, the pope is still Catholic, with all the beliefs and viewpoints that come with that.

Dennis Rodman on Monday has apologized for some bad decisions. First, for not trying to do more to help win American Kenneth Bae's release from North Korean custody. And last week, he apologized for over-reacting to tough questions in an interview with CNN.

Another former NBA player who knows something about "basketball diplomacy" joined the chorus of people criticizing Rodman's recent trip to North Korea. Ira Newble had traveled to Africa to help the refugees from Darfur and had gotten NBA players to sign a 2008 letter urging the president of China to help the Darfur situation. Newble says what Rodman did doesn't meet any definition of basketball diplomacy that he knows, as PRI's The World reports.

I grew up in a Russian orphanage, AMA! http://t.co/4TXVndfpVR

We're used to hearing about air pollution in Beijing and Shanghai, but not in Hong Kong. The new year has brought a new system for tracking pollution to Hong Kong's Victoria Harbor. The Sun reports that the stricter pollution measuring system has revealed high or very high pollution levels virtually every day so far this year.